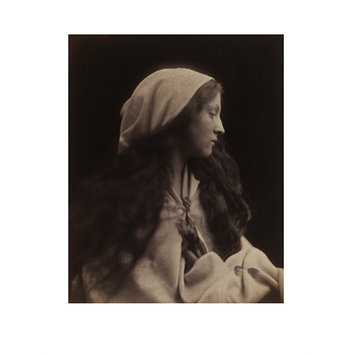 Julia Margaret Cameron accepted and even embraced irregularities that other photographers would have rejected as technical flaws. In addition to pioneering the use of soft focus, she scratched into her negatives, printed from broken or damaged ones and occasionally used multiple negatives to form a single picture.

Although criticised at the time as evidence of ‘slovenly’ technique, these traces of the artist’s hand in Cameron’s prints can now be appreciated for their modernity. Cameron was not uncritical of her work and strove to improve her skills. She sought the opinion of her mentor G.F. Watts, but at his insistence sent him imperfect prints for comment, reserving the more successful ones for potential sale. Cameron also complained to Henry Cole about the ‘cruel calamity’ of cracks that had ruined some of her ‘most precious negatives’.

Milton’s poem ‘On his Deceased Wife’ tells of a fleeting vision of his beloved returning to life in a dream. On the mount of this photograph, Cameron included G.F. Watts’ assessment: ‘quite divine’. Cameron was particularly distraught by the crackling that befell this negative. She seemed not to be bothered, however, by the two smudged fingerprints in the lower right, which form an inadvertent signature.

A photograph of a woman (Mary Hillier) seated, in profile. Her long hair is tied back by a kerchief.

Milton’s poem ‘On his Deceased Wife’ tells of a fleeting vision of his beloved returning to life in a dream. On the mount of this photograph, Cameron included G.F. Watts’ assessment: ‘quite divine’. Cameron was particularly distraught by the crackling that befell this negative. She seemed not to be bothered, however, by the two smudged fingerprints in the lower right, which form an inadvertent signature. 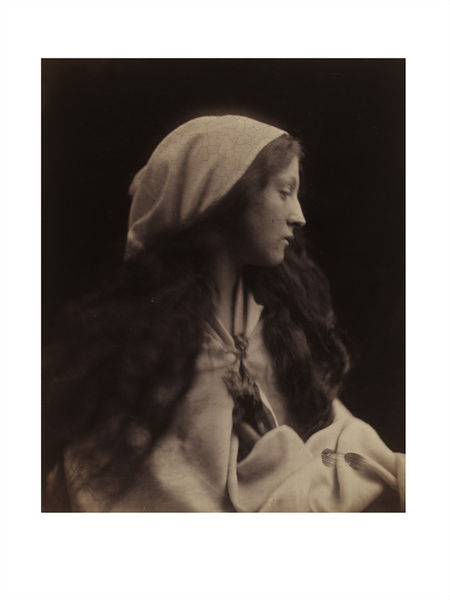