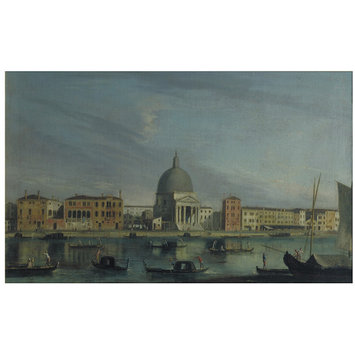 This painting shows across the Grand Canal a view of the church S. Simeone Piccolo in Venice. On the Canal lower right is a boat with an awning while the rest of it is dotted with a few gondolas. The brushwork recalls the influence of major vedute painters of the time including Canaletto and Francesco Guardi even though dominate some essential characteristic of Marieschi's art. The thick impasto and somehow neat handling of the paint indicate this work was probably made at the end of the 18th century.

Under a wide atmospheric sky, a frontal view of the Church San Simeone Piccolo, between pink and creamy white palaces and seen from across the canal; a few gondolas on the water and lower right a boat with an awning.

John Forster (1812-1876) was born in Newcastle, the son of a cattle dealer. Educated at Newcastle Grammar School and University College London, he was a student in the Inner Temple 1828 and qualified as a barrister 1843. Began his career as a journalist as dramatic critic of the True Sun 1832; he later edited the Foreign Quarterly Review (1842-3), the Daily News (1846) and most famously the Examiner (1847-55). He was the author of numerous works, notably the Life and Adventures of Oliver Goldsmith (1848) and the Life of Charles Dickens (1872-4). He bequeathed his extensive collection of books, pamphlets, manuscripts, prints, drawings, watercolours and oil paintings to the V&A.
See also South Kensington Museum Art Handbooks. The Dyce and Forster Collections. With Engravings and Facsimiles. Published for the Committee of Council on Education by Chapman and Hall, Limited, 193, Piccadilly, London. 1880. Chapter V. Biographical Sketch of Mr. Forster. pp.53-73, including 'Portrait of Mr. Forster' illustrated opposite p.53.

Historical significance: Originally attributed to Francesco Guardi, this painting does not correspond to his characteristic manner or to any of his known compositions although it imitates Canaletto's typical elongated figures and Marieschi's vibrant and shiny effect of light on the water.
The painting shows from the other side of the Canal Grande in Venice, and from the left angle, a frontal view of the Church San Simeone e Giuda, commonly called San Simeone Piccolo, between the Casa Adoldo on the left and the Palazzo Diedo-Emo on the right. On the Canal lower right is a boat with an awning while the rest of it is dotted with a few gondolas. The wide atmospheric sky which occupies almost half of the painting recalls the taste of Venetian painters for the rendering of light.
S. Simeone Piccolo appears in the painting in its definitive state which was completed in 1738 and provides a terminus ante quem this painting could not have been executed. The church is modelled on the Roman Pantheon with a large cupola and a temple-front pronaos, ie the space in front enclosed by the portico and the projecting side walls, and was edified between 1718 and 1738 by the archbishop Giovanni Scalfarotto.
A painting ascribed to the school of Canaletto in The National Gallery, London (NG1885), shows a similar view across the Grand Canal from a much closer point of view but in identical warm tones with creamy white and pink building between the pale blue of the water, enlivened by purple hues in the sky.
Probably from the second half to the late 18th century, the present painting presents a combination of Venetians influences including Canaletto, Marieschi and Guardi and seems to chiefly imitate Marieschi neater and vibrant brushwork. Vedute paintings were extremely praised in this period and the fact that no other similar compositions are known suggests this is a genuine work by an unknown hand.

A 'veduta' is a painted, drawn or engraved composition representing a landscape or town view that is largely topographical in conception and was generally displayed as wall schemes for interior decoration. This genre painting became particularly popular in Venice during the era of the Grand Tour of Europe, stimulated by the need of recording topographical settings. Painters who produced 'vedute' were known as 'vedutisti' and benefited from the technical support of the 'camera obscura', a box with a small hole used as an optical device to improve the representation of the natural world, especially the perspective. Many of the vedutisti also produced 'capricci' i.e. compositions that combine imaginary and realistic architectural features in a picturesque setting. The genre declined during the early part of the next century and was gradually transformed by the Romanticism into a vehicle for emotional responses to the visible world. The 'veduta' was however eventually supplanted by the invention of photography in the 19th century. 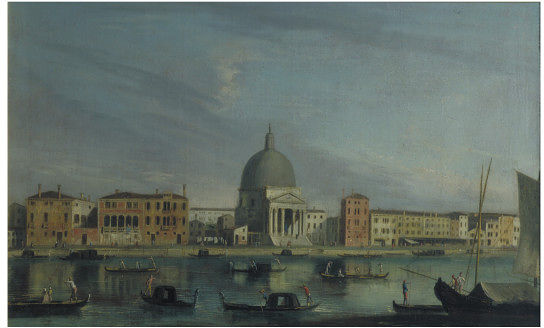