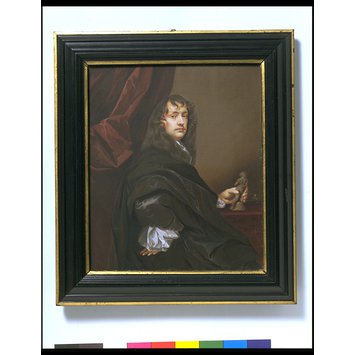 This is a copy in miniature after the large-scale self-portrait in oils by Peter Lely of 1660 (in the National Portrait Gallery, London). It was an established practice in the 17th century to copy in miniature works by Old Masters. Charles Beale the younger was the son of Mary Beale, the oil painter, who was friends with Sir Peter Lely. His father, Charles Beale the elder, was retired from the Patents Office and lived the life of a connoisseur and collector. He was keen that his son should learn to paint, probably not for economic reasons but to acquire the knowledge and skill to be able to converse with other members of cultivated society. At the age of 17 the younger Charles was sent to learn to paint miniatures with Thomas Flatman, another friend of the Beale family.

This miniature was painted only two years later and is signed ‘CB’. This work is different in technique to other works by Beale the younger, but it is attributed to him despite the fact that Beale the elder had also learned miniature painting from Flatman. Young Charles also spent time sketching in Lely's studio, but this copy was probably after a version of the self-portrait that hung in the Beale family home in London.

Frame: Eighteenth-century ebony-faced mitred frame, rising from straight outer edges (the upper surface of which is gilded) through a series of cyma recta and thread mouldings to an emphatic bolection, before descending through a small bolection and cyma recta (the latter gilded) forming the upper surface of a rebate which holds the flat modern glass. The ebony is mounted on an oak carcase with lapped joints, and the whole backed with modern, black-painted fibreboard, which once held a glazed back covering the various old labels (see above). The hanger is a simple brass ring in a folded brass clip nailed to the carcase.

'Mr LiIly's Picture./ A Coppy after himself'
Inscribed in ink on the back of the panel

'Mr Lilly'
Incribed on the vellum wrap-over, this inscription identified by the later nineteenth-century hand as Sir Robt Walpole's writing

Another early ink inscription, also on the vellum wrap-over, deleted

'Copy of a portrait of Sir Peter Lely (probably by himself) by L. Cross: 1679'
Incribed again on the sealing paper in a later hand

'The same subject…'
Also a label cut from BFAC 1888 exhibition, relating to the Lely self-portrait, then in the possession of the Earls of' Iersey and attributed to William Dobson; inscribed in the late hand (above)

Provenance: According to the inscriptions, Sir Robert Walpole, 1st Earl of Or ford; acquired by Horace Walpole as his father's heir in 1744-5, and presumably brought to Strawberry Hill when Horace Walpole acquired the house in 1747. Bequeathed in 1797 with the house and contents to Mrs Damer, who subsequently resigned the whole property to Elizabeth, Dowager Countess Waldegrave; thence by descent to George, 7th Earl Waldegrave; his sale 6 May 1842, lot 65 (‘a very beautiful miniature'), bought Gosling, 7 gns; subsequently in the possession of Vere,Viscountess Galway, and sold by her, Christie's 14 July 1905, lot 57, (attributed to 'Lawrence Crosse'): bt Durlacher £53.11s., from whom purchased by the Museum, 1905.

Portrait miniature of Sir Peter Lely, watercolour on vellum by Charles Beale the younger, after an original by Peter Lely, 1679. 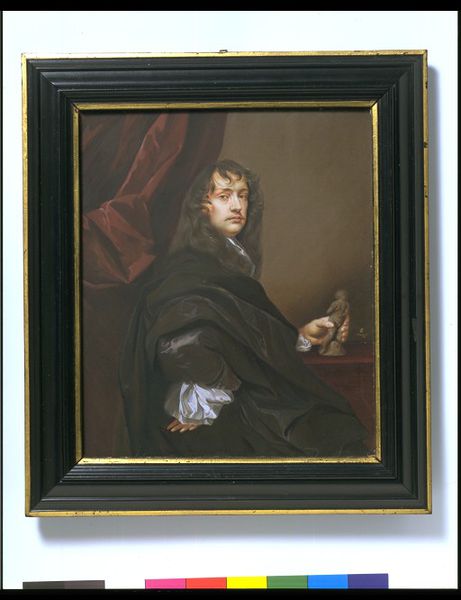