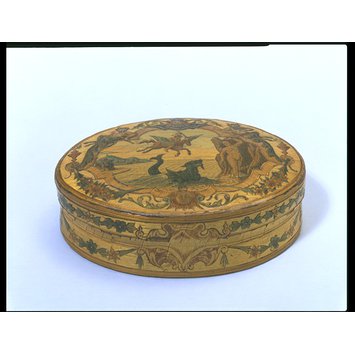 This small box is a particularly skilful and detailed example of straw marquetry decoration. Straw marquetry is made from straws, split, opened flat, and glued to paper to form sheets, from which shapes were cut and then glued to a panel or box. The grain of the straw used in different directions catches the light. Sometimes colour was added by dyeing the straw before use, and detail added by engraving lines which were then rubbed with black pigment.
This box shows mythical subjects, probably drawn from printed sources: Perseus and Andromeda on the lid, with Perseus's mother Danae inside. It is signed inside by C.F.V. Hering in 1732. He was from a family which specialised in producing straw marquetry and is known to have worked in Leiden in 1730 and 1731, and in London in 1732.

Information from Andrew Renton, Straw marquetry made in Lübeck, Leiden and London by the Hering family. Furniture History, 1999, vol.XXXV pp.51-86.

Small oval box of straw work, the lid with a scene of Perseus and Andromeda on the outside and, on the inside, of a reclining Venus, holding a string of pearls, with Cupid pouring gold coins from his quiver. The base of the box shows fruit, within a formal frame, the inside set with a star shape, and carrying the name of the maker and the date

C.f.V. Hering fecit
London 1732
Cut into the straw-work on the inside of the base of the box. The V and the H of the name are conjoined.

No. 1
Cut into the straw work on the inside of the base of the box

The decoration of this box refers to the Greek myth of the hero Perseus, who is most famous for slaying the Gorgon, Medusa. The design was probably based on an engraving but as so many were made illustrating such myths, it has not yet proved possible to identify the particular image that is the source for the marquetry. Perseus was the son of the mighty god Zeus and the human woman Danae, daughter of King Acrisius of Argos. The king had been warned that he would be killed by a grandson, so imprisoned his daughter but Zeus saw her and fell in love. He came to her as a shower of gold (the gold coins poured out by Cupid, as shown on the inside of the lid, may refer to this story). When Perseus was born he was exiled with his mother, and came to the island of Serifos. When King Polydectes fell in love with Danae, he tried to get rid of her son by challenging him to slay the Gorgon Medusa. Helped by the gods he succeeded in his mission. On his way home on his flying horse, passing over Ethiopia, he saw Andromeda, chained and helpless, left to be eaten by a great monster, Ceteus, who had threatened the communities of the coast after Andromeda's mother (Cassiopeia) had boasted that her daughter was more beautiful than the sea nyphs (Nereids). Offering Andromeda to the moster had seemed the only way of safeguarding the people. Perseus liberated her and took her back with him to the Island of Serifos as his wife.

According to Andrew Renton (see refs.), straw work is made from barley, oak or wheat straw, although it is impossible to distinguish between these without microscopic examination. Originally these pieces would have been highly coloured but they have faded. The straw would have been bleached in sulpher vapour, then soaked or boiled in an alum solution with different dyestuffs. It would then have been split and flattened and glued onto paper (sometimes three layers glued together). The sheets could then be cut with a knife, much as veneers are cut for marquetry, and applied to the panels or boxes, made of oak or pine. On the pieces made by the three makers with the name of Hering (see refs.) there is little repetition of motifs, so it is likely that each marquetry motif was cut individually, not with severy layers of straw/paper in a stack, as might have been done for veneers of wood or turtle shell or brass.

The box was bequeathed by Mrs Hylda D'Angibau of Broadstaone, Dorset. The registered file (MA/1/D4) gives no earlier history of the box but it is clear that someone from the Museum had seen the box at an earlier date and identified it as of interest.

Andrew Renton lists 9 pieces signed by C.F.V. Hering, including the panel in the V&A (W.160-1919); an oval box in Luton Museum and Art Gallery, inv. L/84/46; another, inv. no. L/85/46; two oval boxes, present whereabouts unknown; a card-counter set in the Historisches Museum, Hannover, inv. no. VM 35295; and two others in private collections. He also lists 4 pieces that are attributed to this maker: a card-counter set, undated, in the National Museums and Galleries on Merseyside, Lady Lever Art Gallery, inv. no. LL9212; another in a private French collection; a box from a card-counter set, current whereabouts unknown; and three tea caddies in the S.Jon Gerstenfeld Collection, USA.

Small oval box of straw work, the lid with a scene of Perseus and Andromeda on the outside and, on the inside, of a reclining Venus, holding a string of pearls, with Cupid pouring gold coins from his quiver. The base of the box shows fruit, within a formal frame, the inside set with a star shape, and carrying the name of the maker and the date: 'C.F.Hering fecit. London 1732' 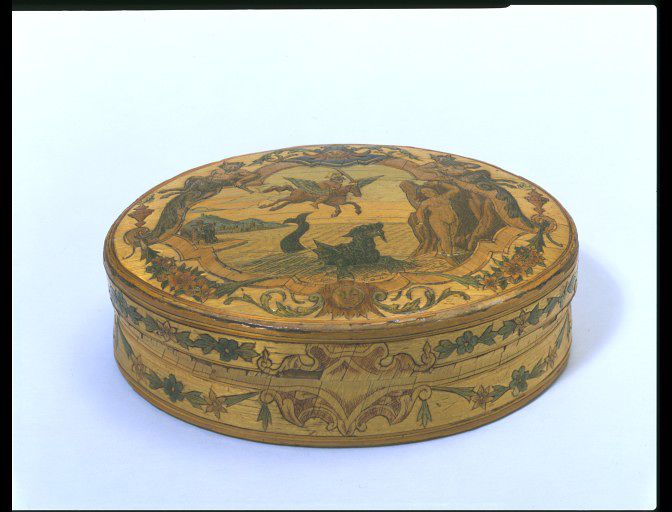