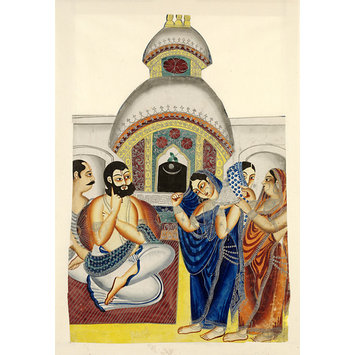 Painting, in opaque watercolour and tin alloy on paper. An episode of the Tarakeshwar affair. The Mahanta (high priest) of the Shiva temple is shown seated on a striped rug in front of the temple, with a second man behind him. In front stand three women: Elokeshi, the young wife of the clerk Nabin Chandra Banerjee, is shown veiling her face with a part of her sari with her right hand and holding up a plate of offerings (naibedya) for the shrine with her left. Behind Elokeshi stands her younger sister Muktakeshi with her face veiled, and to the right stands Telibou (wife of oil seller), the female servant in the family who acted as procuress, looking boldly at the waiting Mahanta.

The Mahanta has been depicted wearing string necklaces but not the sacred threads of a brahmin, also he has been shown with Vaishnavite mark on his forehead although he is a Shaivite priest. The forefinger of his righthand rests thoughtfully on the beard of his cheek.

All three women as well as the Mahanta have been shown adorned with ornaments which are stock-in-trade of the 'patuas'.

The Tarakeshwar murder case of 1873 was a public scandal in Calcutta based on an affair between Elokeshi, the young attractive wife of Nabinchandra Banerji, and the mahanta or chief priest of the Shiva temple at Tarakeshwar. Upon discovery of the affair, on 27 May 1873 her jealous husband Nabinchandra Banerji cut Elokeshi's throat with an 'aish boti' (fish chopper). In the trial that followed Nabin was sentenced to life imprisonment and the Mahanta was fined and imprisoned for 3 years. Different variations of this affair favouring the various characters occur in several Bengali plays and Kalighat images between 1875-80.

The 'pata' formed a part of an album, containing 196 prints, paintings and pen and pencil drawings, together with 37 loose pages of paintings, calligraphic drawings and outline pen drawings. The collection was formed by the late J. Lockwood Kipling when he was Director of Lahore School of Art. The collection was received from his son the late Rudyard Kipling on 8th August, 1917.

Historical significance: Calcutta was the Capital of British India from 1833-1912. By the 1830s, artists had arrived from rural villages in Bengal and began to produce paintings that reflected local history, mythology, customs and conflicts of a colonised society. As a popular art form, these artists are recognised for their use of brilliant colour, simplified images and swift brushstrokes that became the hallmark of Kalighat painting in the 19th and early 20th century.

Painting, Elokeshi meets the mahant at the Tarakeshwar Shrine, in opaque watercolour and tin alloy on paper, Kalighat, Kolkata, ca. 1875 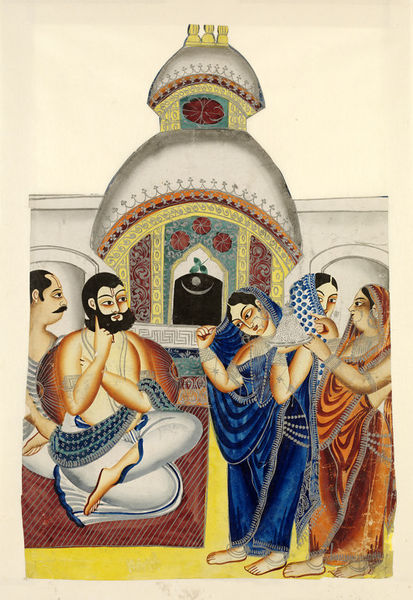