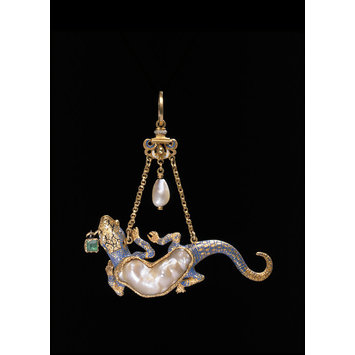 The body of this salamander consists of a large 'baroque' or irregular-shaped pearl. Baroque pearls presented the jeweller with an opportunity to demonstrate their skill at adapting an object formed by nature to the requirements of Renaissance fashion. White pearls set in mounts became the height of fashion in the later sixteenth century and irregular-shaped specimens were as highly prized as perfectly spherical examples.

The belief that the salamander, a small amphibious creature resembling a lizard, was impervious to fire and could extinguish flames was recorded by Aristotle and Pliny. It became an attribute of fire personified and as such was associated with the condition of the ardent lover. This jewel may well have been an expensive love token given to a man or a woman.

Pendant in the form of a salamander, suspended by two chains joined at a cartouche with a pearl drop. Its body is formed by a baroque pearl set in gold with blue enamel. In its mouth it holds a rod from which hangs an emerald pendant.

Enamelled gold, set with pearls and an emerald

Purchased by George Salting from 'Goldschmidt', and bequeathed to the V&A in 1910 as part of the Salting Bequest.
Goldschmidt could refer to J. and S. Goldschmidt of Frankfurt am Main (?)
The emerald suspended from the mouth of the salamander is a 19th century addition. The marks on the back suggest that a later brooch fitting has been removed. Whether the chains and the pearl, and the suspension plate from which they hang, are late 19th century additions, made when the brooch fitting was cut off in order to return the salamander to Renaissance pendant form, is a question which needs to be asked. Renaissance jewellery was so much in demand in the 19th century that it was faked, and an old body (if that is what the salamander is) may have been restored to nearer its previous appearance by the removal of the brooch fitting and the re-making of the chains and the suspension plate.

Pendants were a popular type of jewellery in the Renaissance period and featured subjects with both religious and secular themes. Secular subjects, such as the salamander, carried symbolic meanings that would have been widely understood. The salamander was thought to have the ability to withstand fire and was a symbol of passionate love.

Pendants like this salamander, made up of a three-dimensional figure directly suspended by chains, became popular during the second half of the 16th century. They were worn by both men and women, usually at the end of a gold chain. They were intended to dangle freely and to be visible on both sides, as in this pendant where the form of the salamander is intricately decorated on both front and back.

The salamander’s shape has been formed around a large baroque pearl mounted in enamelled gold. Baroque pearls were an exotic import, associated with overseas exploration and trade. The irregularly shaped pearls were often used for the centre of the figure, their shape creatively utilised as the curve of the subject, the remainder of which was formed out of gold and enamel. The emerald that the salamander holds from its mouth is considered to be a 19th century addition.

A similar object is held in the Museo degli Argenti, Florence (Massinelli, p.228). This object comprises of a thin baroque pearl slice forming the back of the lizard, the limbs formed from gold and set with diamonds. It is attributed to Flanders, end of the 16th century.

Two pendants similar to M.537-1910 are held in a private collection in the Belgium (Taguchi, p.30-31). Both are lizards lying in an S-shaped curve, one features a baroque pearl as the reptile’s body.

Another similar salamander pendant (but without a baroque pearl at its centre) was in the possession of S. J. Phillips Ltd, London (Munn, p.45). The jewel is described as Spanish, dating from about 1600.

Among the objects recovered from the Girona shipwreck there is a related representation of a salamander in gold and set with rubies (Doran, cat.245)

Pendant, in the form of a salamander, enamelled gold set with pearls and an emerald, West Europe, late 16th century.

17 Salamander Pendant
About 1575-1600
Worn on a gold chain at varying lengths around the neck, or at the waist, or pinned to a billowing sleeve, this may have been a love token. Salamanders were believed to live among flames and so came to symbolise the ardent lover.
Western Europe, perhaps Germany
Blister pearl set in an enamelled gold mount, with a pearl and later emerald pendants
Pendant chain later
Salting Bequest
Museum no. M.537-1910 [2009]
PENDANT (a lizard)
Enamelled gold, set with pearls and an emerald.
WEST EUROPEAN: late 16th century
lent from the Salting Bequest 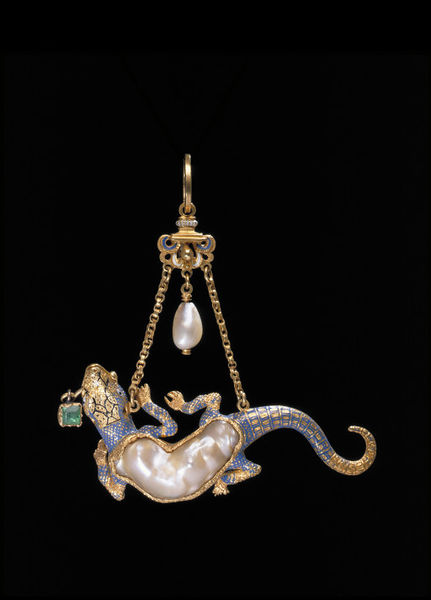