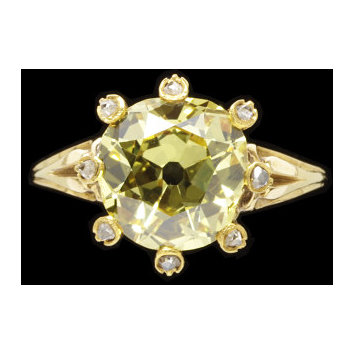 Diamonds are made of a crystalline form of pure carbon, creating the hardest mineral known. They have a high surface ‘lustre’, meaning that much light is reflected from their surface. This light is combined with light reflected through the stone from the back facets to create ‘brilliance’. Light passing through the stone is also split into a broad spectrum of colours termed ‘fire’. A modern brilliant-cut diamond is faceted so that it combines a high level of brilliance with fire.

Diamonds occur naturally in a variety of colours: colourless, yellow, brown, black, blue, green, pink and extremely rarely red. This ring is set with a yellow diamond. These are mostly found in South Africa. Their colour is caused by the presence of nitrogen.

The diamond rings (Museum nos 1172 to 1179-1869) all came to the V&A as a bequest by the Reverend Chauncy Hare Townshend. They had previously been part of the famous Hope collection of gemstones. They entered the Museum in 1869. They have attracted the attention of gemmologists because it is known that their colours have not been enhanced or created by techniques subsequently invented.

A gold ring set with a yellow, brilliant-cut diamond surrounded by eight small rose-cut diamonds, made in Europe, 1800-1869 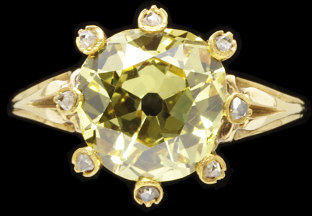