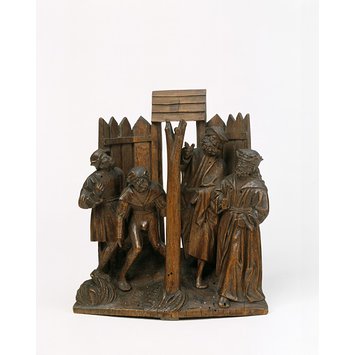 David Finds the Rods have Taken Root and Become One Tree

In northern Europe the altarpiece was the most important type of sculpture in wood. The structure of a winged altarpiece was dominated by the central panel, the corpus, and its figures. The wings carried relief carvings, figures or narrative paintings. The predella often contained busts of apostles or saints. The crowning superstructure was usually decorated with finials and small figures. On certain days and during Lent the corpus and the predella were closed from view.

The subject-matter of this series of reliefs (Museum nos 114 to 114A to F-1908) is extremely unusual. They almost certainly belonged to a larger cycle of the Legend of the True Cross. Woodcuts published by the printer Johan Velderner in Culemborg in 1483 have helped to identify them. This one is: David finds the rods have taken root and have become one tree. The unusual subject-matter suggests that the altarpiece to which the reliefs belonged was specially commissioned. The theme of the decoration would have been based on the dedication of the chapel or church for which the altarpiece was intended. The size, form and construction of the reliefs suggest that they originally formed part of a large altarpiece. They were probably set into the voussoirs or hollows of the frame flanking the major scenes.

This relief is one of a group of seven reliefs in the V&A's collection, which almost certainly belonged to a larger cycle depicting the Legend of the True Cross. It is carved from oak, with no visible traces of polychromy, and shows the episode of David finding the Rods have Taken Root, and Become one Tree.

Brussels (probably, made)
Netherlands (Southern, made)

Bought through Messrs Durlacher Bros, London, from the sale of the late Mr W. Jerdone Braikenridge collection (Christie's, London, 27 February 1908, lot 93), for £341 15s. 6d. According to the sale catalogue, 'the collection was formed early in the nineteenth century, by George Weare Braikenridge, Esq., deceased, of Broomwell House, Brislington, near Bristol, and kept in a museum at that house, until brought to Clevedon (Somerset) by his son, the Rev. George Weare Braikenridge, deceased, from whom it passed to the late owner'.

The group of reliefs comes almost certainly from a larger cycle depicting the Legend of the True Cross, and may be identified by reference to the woodcuts published by the printer Johan Veldener in Culemborg in 1483. The scenes are as follows: Moses plants the rods in the land of Moab; David finds the rods have taken root and have become a tree; the holy wood is carried into the Temple; the Sick being healed at the Pool of Bethesda; the holy wood is taken from the water and made into the Cross; St Helena deposits a portion of the Cross in Jerusalem; and Heraclius kills Chosroes and carries off the portion of the Cross.

Judging by their size, form and construction, it is likely that the reliefs originally formed part of a large altarpiece, set into the voussoirs or hollows of the frame flanking the major scenes. Such an arrangement may be seen in examples at Boussu and Geel, although there the smaller groups show scenes from the Infancy and Passion Christ, complementing the iconography of the larger narrative panels below.

The subject matter of the present reliefs is unusual and would seem to indicate that the altarpiece to which they belonged was specially commissioned, with a decorative programme tailored to the dedication of the chapel or church for which the altarpiece was intended. Although it is possible that the scenes could have framed the scene of the Crucifixion, it is more likely that they belonged to an altarpiece partially or completely dedicated to the Legend of the True Cross, such as may be found in Dortmund and Zoutleeuw, and one in stone in Héverlé.

Many chapels in the Netherlands and elsewhere had fragments of the True Cross - in 1513, for instance, the abbey of Saint-Armand had no fewer than nine fragments set into individual staurothèques - and such an altarpiece would have emphasized the possession of these celebrated relics.

Relief (one of a group of seven), David Finds the Rods have Taken Root and Become One Tree, carved oak, Southern Netherlands (probably Brussels), ca. 1500 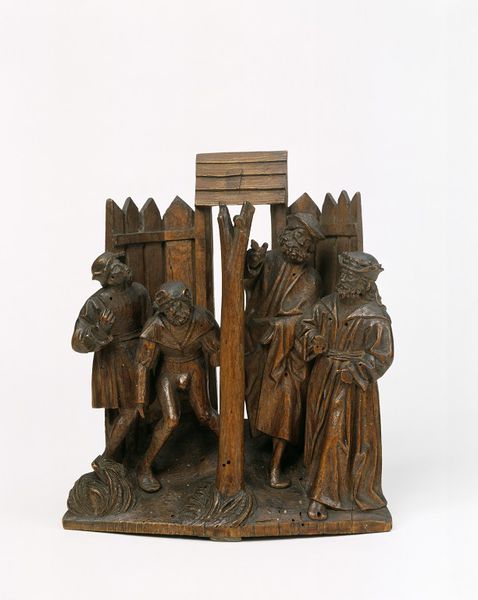