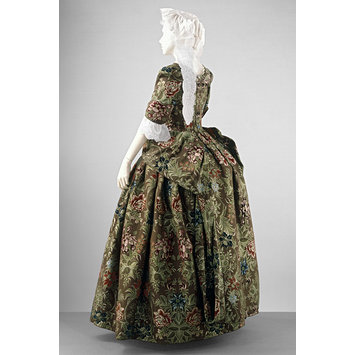 This is an example of a woman's formal day ensemble in Britain in the late 1730s. Elbow-length sleeves with a deep pleated cuff characterised the mantua, or gown, during this decade. Looped-up and draped bodice skirts and a pinned-up train are typical features of a mantua. The silk design represents an early example of the new patterns of the 1730s, which emphasised the three-dimensional nature of the forms. The dark, rich colours seen here were popular during the early decades of the 18th century.

A woman's mantua and petticoat of brown silk brocaded in a large floral design with maroon, red, green, blue and white floss and chenille silk thread. The mantua is open at the front with elbow-length sleeves with pleated cuffs. The bodice is unlined, with a panel of white silk taffeta at the centre back. The pleats at the back are stitched down. Robings on either side of the front reach to the waist and open out below. The centre back panel of the train is reversed below the waist, and the train fold back and stitched. The panels on either side of the back train are triangular, pieced and reversed to allow them to be looped up and draped, so only the right side of the silk shows when worn. There are two loops of green silk cord either side of the waist on the inside and corresponding silk covered buttons on the outside.

The petticoat is made of 5 widths of silk pleated at the waist.

Alterations for fancy dress were made in late 19th century; pleats were made in the front of the gown and stitched to narrow bands of linen. The train was permanently stitched up. The waist binding of the petticoat was removed and the pleats reconfigured. The sleeve linings and petticoat lining were added by Textile Conservation.

A woman's formal day ensemble of the late 1730s. The mantua evolved from its informal version in the late 17th century. By this period, the construction is more structured and the once flowing train fixed in its pinned up position. The silk design represents an early example of the new patterns of the 1730s, which emphasised the three-dimensional nature of the forms. 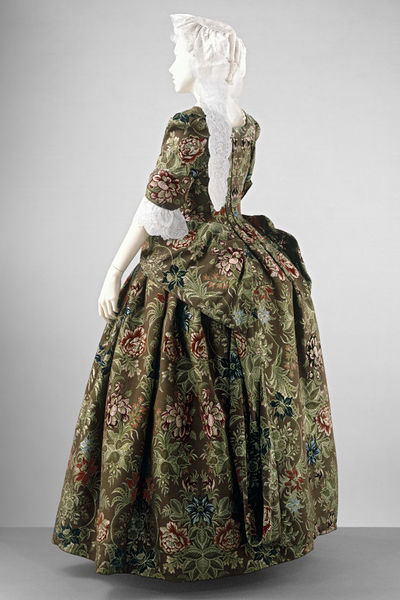