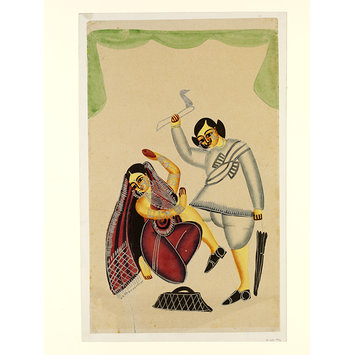 Painting, watercolour and tin alloy on paper, episode from the Tarakeshwar murder case, depicting the moment when the government clerk, Nabin, stands poised to behead his wife Elokeshi with a fish knife. Wearing a burgundy sari against yellow skin tones, Elokeshi kneels before her husband with her face turned away and hand raised to ward off the blow. The black 'holdall' used by the painters to illustrate one of Nabin's westernised accessories lies on the ground in front of Elokeshi whilst the umbrella, a further western attribute, hangs limply from his left hand.

Painted in watercolour and tin alloy on paper

The Tarakeshwar murder case of 1873 was a public scandal in Calcutta based on an affair between Elokeshi the young attractive wife of Nabinchandra Banerji and the mahant or chief priest of the Shiva temple at Tarakeshwar. Upon discovery of the affair, on 27 May 1873 her jealous husband Nabinchandra Banerji cut Elokeshi's throat with a fish knife. In the trial that followed Nabin was sentenced to life imprisonment and the Mahant was fined and imprisoned for 3 years. Different variations of this affair favouring the various characters occur in several Bengali plays and Kalighat images between 1875-80.

Historical significance: Calcutta was recognised as the Capital of British India from 1833-1912. By the 1830s, artists had arrived from rural villages in Bengal and began to produce paintings that reflected local history, mythology, customs and conflicts of a colonised society. As a popular art form, these artists are recognised for their use of brilliant colour, simplified images and swift brushstrokes that became the hallmark of Kalighat painting in the 19th and early 20th century.

For another version of the same paintings see IS 25-1952.

Kalighat painting, Nabin about to deliver the fatal blow to Elokeshi, watercolour and tin alloy on paper, Kolkata, ca. 1890 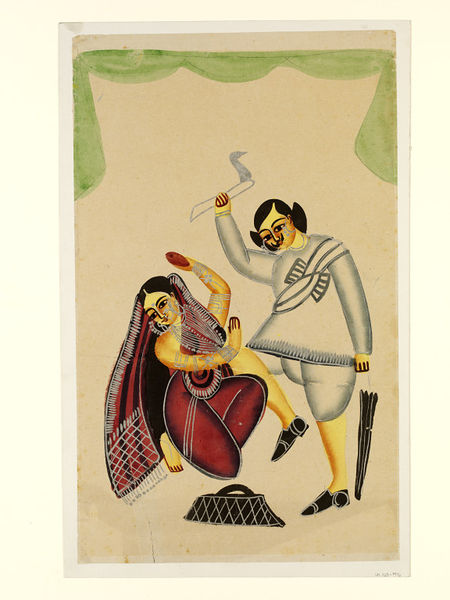