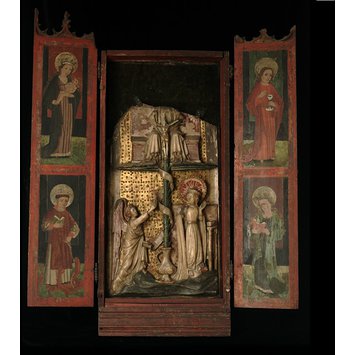 The Annunciation with Trinity

The hinged wings of the case are painted with figures of the Virgin and child above St Cyriac on the left and St John the Evangelist on the right. The paintings date from the late fourteenth or early fifteenth century and are probably German.

This tall panel, which has carefully chamfered sides, is divided by a stepped cloud-like ledge into two sections representing earth and heaven. In the lower half the haloed figure of the Virgin Mary, wearing a fillet on her head and a high-necked belted gown with a cloak over her shoulders, kneels on a cushion at the bottom right of the panel, at an arcaded desk on which rests an open book. She turns at the waist, hands raised apart in an attitude of surprise, to look at the figure of the archangel Gabriel who, also wearing a fillet and a gown and a loose robe, stands on a projection of ground with his left leg bent at the knee, his right leg stretched down behind him. In his left hand he holds the end of a scroll which descends from God the Father and curves round the stem of a lily resting in a ewer between him and the Virgin. He looks up at the scroll which doubtless bore an inscription of his salutation, 'Ave Maria gratia plena,' and touches it with his outstretched right hand. The lily stem rises above the division of the panel, uniting heaven and earth. The lily plant bears the crucified Christ. God the Son is set between the knees of God the Father who is seated on a bench wearing a robe and a cloak, thus forming a representation of the Trinity, although the Dove is missing.

The wooden housing, which appears to be oak, has two hinged narrow wings painted with figures of the Virgin and Child above St. Cyriac on the left and St. John the Evangelist above St. Ursula on the right. The paintings are late 14th- or early 15th-century and probably German. The backs of the two wings bear the remains of plain brownish paint, and there is some modern wood at the bottom of the housing.

The whole of the top of the panel is missing. The head of Christ and a lily flower behind it are missing. The right hand of the Virgin is missing. Gabriel's right wing is chipped. The bottom left-hand corner of the panel has been broken across and repaired. There is green paint on the ground and on the lily plant. Red paint and gilding remain on the halo. There is red flecked with white on the angel's wings. God the Father's throne is a reddish colour. The background is gilded and most of the gesso knobs decorating it are intact. The costumes are edged with gilt. The back of the panel bears four lead-plugged holes, two with the remains of latten wires. The marks of the saw used to cut the panel from a block are horizontal and clearly visible.

Carved, painted and gilt alabaster, in a wooden housing

Formerly in the Kunstgewerbe Museum, Cologne, and before that in the Wallraf-Richartz Museum, Cologne. The presence of St. Ursula, patron saint of Cologne, and the provenance of the panel may point to a commission. The panel was evidently a single devotional carving and was never part of a reredos. Bought by Dr W. L. Hildburgh in London. On loan to the Museum from Dr Hildburgh since 1938. Given by Dr Hildburgh in 1946. 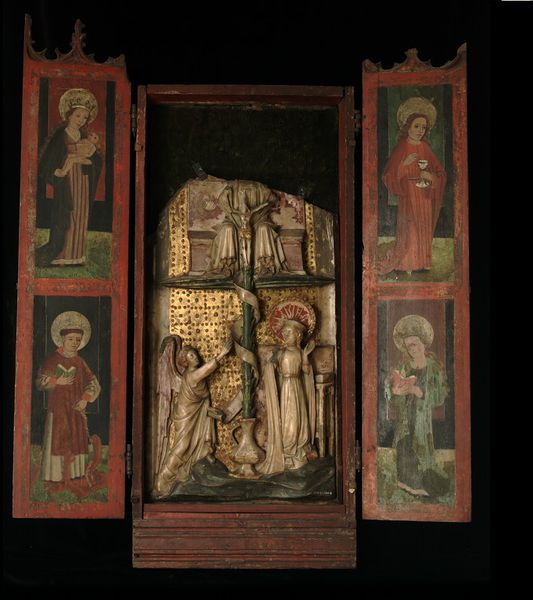