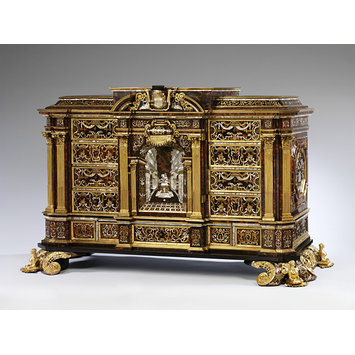 The small scale of this cabinet and its luxurious materials suggest that it was designed for personal use by a wealthy individual, in this case the Bishop of Wiener-Neustadt, in Austria, Johann Franz Khevenhüller. His arms are shown at the top of the cabinet, in the form used when he was bishop, between 1734 and 1740. The cabinet carries the date 1715, inscribed in the marquetry on its central panel. Given that Khevenhüller was only born in 1707, it is unlikely that he was the original owner of the cabinet, but it may have been made for a member of his family. In the 18th century, bishops were often prominent figures, wielding extensive political power and actively supporting the arts. The cabinet may have been made in Vienna, or perhaps in Augsburg in southern Germany, a city that had been famous for fine cabinet-making since the 16th century and where Khevenhüller was ordained as priest in 1730.

Table cabinet of architectural design, veneered in marquetry of tortoishell, mother-of-pearl, brass and copper, set with gilt-copper mounts. The central door of the cabinet is set with a panel showing a city square in perspective, with a central equestrian statue of a military commander on a high plinth. The facade of the palace to the left of the scene carries a coat of arms with a crowned eagle and the date letters CCXV ( the preceding MD concealed by the perspective of the framing. The cabinet carries in the broken pediment at the top of the central section a coat of arms (probably added 1734-40) with the arms of Count Johann Franz Anton von Khevenhüller.

The cabinet is of rectangular form with diagonally outset front corners and a raised central section, the whole raised on out-curving, shaped low feet set with scrolled gilt-copper mounts, from which emerge sphinxes. The cabinet is of architectural form, with an integral low plinth, set with five drawers between the plain plinth panels which support the four gilt-copper Corinthian columns that divide the front surface into three sections. Additional Corinthian columns are set at an angle to each of the outer ones on the front corners. The main body of the cabinet is set with two banks of four drawers, flanking the central doorway, with rounded, broken pediment with rises into a raised, breakfront centre section. The door is set with the perspective scene described above. The cornice breaks forward over each of the pilasters and behind this is set a mansard section, with sloping sides, which is broken in the centre by the section which brings the full height forward to the front edge of the cabinet and against which the broken pediment is set. The door is hinged at the right and opens to reveal an arched inlaid panel on the inside showing a bouquet of flowers in a vase standing on an architectural plinth. The recess is fitted with a single drawer at the base, the main cupboard section lined (probably in the 19th century) with red cotton velvet. The sides of the cabinet are set with flat marquetried panels at plinth and frieze level, the main body set with raised, shaped octagonal panels, the mouldings veneered with tortoiseshell, the main panels veneered additionally with mother-of-pearl, copper and brass, in designs that centre on an amorous pair of god and nymph, probably taken from printed sources. The top of the cabinet is veneered in three panels with walnut, with banding of mahogany, all probably added in the 19th century.

Vienna (possibly, made)
Augsburg (Possibly. The scrolled feet with terms emerging is a noted Augsburg fashion of the early 18th century. See William P. Rieder, 'An Eighteenth-Century Augsburg Cabinet', The Burlington Magazine, vol. 112, no. 802 (January 1970), pp. 33-7, where this cabinet is noted in note 10, p. 34, made)

Marquetry of tortoiseshell, mother-of-pearl, brass and copper, on an oak carcase, with gilt-copper mounts and drawers lined with printed paper; the top of the cabinet is veneered in walnut and mahogany

The cabinet may well have been originally made for the family of Count Johann Franz Anton von Khevenhüller (1707-1762), who was Archbishop of Wiener-Neustadt between 1734 and 1740 but there is no evidence for this other than the arms on the cabinet. His arms, which are clearly an addition, would have been added to the cabinet when he was appointed to the bishopric. It has been suggested that the marquetry panel, with the date 1715, on the central door may be an addition, because of the awkward fit of the marquetry and the differences in materials, but in the late 17th and early 18th centuries complete uniformity was not always of such concern to patrons as it might be now. In the case of this cabinet, the marquetry panel of flowers in a vase, which is inside the central cupboard door, is also different in quality from the marquetry of the exterior, and it may be that two more ambitious panels were incorporated into the design.

The cabinet belonged to Cap. L. W. Neeld of Kelston Park, Somerset, in the mid-20th century and was sold from his collection by Christie's 24 April 1958. It was sold in a group of 14 lots from Capt. Neeld's collection (lots 106-119), all described as French, from the eighteenth century, or in eighteenth-century style. The cabinet was not illustrated but was described as:

Lot 112. 'A Louis XIV marquetry cabinet, fitted with eleven drawers surrounding a cupboard to the architectural centre with panelled door enclosing a cupboard and one small drawer, the interior and exterior inlaid with elaborate designes of interlaced strapwork foliage, and medallions in brass and mother-o'-pearl on a tortoise-shell ground, the centre panel with an architectural landscape with equestrian statuette in the foreground, surmounted by a shield of arms within drapery surround, mounted with ormolu fluted columns to the angles surmounted by foliate capitals and with ormolu scroll and shell feet, with figures of sphinxes in full relief; on ebonised table-shaped stand of later date, with bold cabriole legs and scroll feet, with giltwood borders, foliage plaques to the angles and toes - 50 in. wide.'

The cabinet and stand was presumably bought from Christie's by Gerald Kerin, 15 Davies Street W1, who sold it to the Museum on 30 April 1958 for £675, reduced from £750. Kerin justified the price by saying that a French dealer was also highly interested and quoting the sale for £10,000 two years earlier by Cameron's of a table and two candlestands of similar work but 'of no better quality'. This exchange is in a memo from Mr Molesworth to the Director Trenchard Cox, sent close to the time of the acquisition. Note that there is no mention of the stand in the Museum records and it was presumably discarded by Gerald Kerin as a later addition to the piece. Kerin described it as 'Louis XIV' in his delivery note but Delves Molesworth had identified it as German and it was so described in the purchase papers. On 2 August 1958 J.P. Harthan of the NAL wrote a memo to Mr Thorpe identifying the arms as those of Johann Franz von Khevenhüller (see copy in departmental files). He pointed out the discrepancy between the date of 1715 on the cabinet and Khevenhüller's appointment as Archbishop in 1734. The Nominal File for 'Kerin' includes correspondence with a Georg Khevenhüller in Austria and with the curator Franz Windisch-Gratz in Vienna. He was the first to raise the possibility of it having been made in Vienna (copies and translations in departmental files).

A sofa table with Blairmans in 1958 appeared to have been made from the original stand for this cabinet (the marquetry is almost identical) and the likely date of that table (1840s) and the likelihood from its design that it was made in England, may suggest a date and place for the re-veneering of the top of the cabinet, although it is equally possible that the table is simply made from elements produced in the same workshop but not from an original stand. Photographs of the table are in departmental files. The table was inlaid on the low stretcher/footrest, with a monogram including the initials CF, surrounding a sceptre. Suggestions have been made to identify this with e.g. Friedrich Carl, Graf von Schönborn (1674-1746) but there is no firm evidence for any identification. The table was sold again at Picard, Paris, 21 December 1994, lot 140.

A small cabinet in boulle marquetry, attributed to Southern Germany or Vienna, was sold from the collections at Mentmore Towers, 1977. See Mentmore. Volume I. Catalogue of French and Continental Furniture, Tapestries and Clocks. Sotheby's, 18-20 May 1977, lot 844. There are similarities in shape and scale between the two cabinets, although not in the detail of the decoration.

Because the term 'boulle marquetry' has become universally used to describe marquetry of tortoiseshell, brass and copper, with other materials, it is easy to see this technique as deriving from France and reaching the peak of craftsmanship there. In fact, the technique was used in other centres, particularly in the Low Countries and the German states. Augsburg was one of the centres of such work and the use of copper-gilt mounts, much thinner that the gilt-brass mounts used generally in France, was also common in Augsburg, which was really the birthplace of fine cabinet-making in the 16th century and continued to excel at decorative techniques of marquetry and inlay, and also at fine metal-working.

The maker of this piece has not been identified and, indeed, it may have been made in Augsburg or Munich rather than Vienna (Khevenhüller was ordained priest in Augsburg in 1730, so would have known the quality of marquetry produced there in the early-18th century). Makers who created boulle marquetry of this quality in the German states included Johann Matusch (active from about 1702) who worked in Ansbach after a training in Paris, Ferdinand Plitzner (1678-1724) of Eyrichshof, who is best known for his work for Lothar Franz von Schönborn, Archbishop of Bamberg and Würzburg at Schloss Weißenstein, Pommersfelden between 1713 and 1724 and Johann Puchwieser in working in Munich from about 1720.

Table cabinet of architectural form, with a central doorcase flanked by two banks of drawers, the whole veneered in tortoiseshell, mother-of-pearl, brass and copper, with mounts of gilt copper

This luxurious cabinet carries the arms of Count Johann Franz Anton von Khevenhüller. He was the Archbishop of the Austrian city of Wiener-Neustadt during the 1730s, at which date the armorials were added. The cabinet may have been produced in the German city if Augsburg, a centre for fine cabinet-making that later developed a strong tradition of boulle marquetry [2015]
[Label text by Peter Thornton]
Ornamental cabinet
Viennese; dated 1715

Oak, veneered with marquetry of tortoiseshell, mother-of-pearl and gilt copper, with copper mounts.

Bears the arms of Count Johann Franze von Kevenhüller, later (1734-1741) Bishop of Wiener Neustadt; they were probably altered when he was elevated. There is no reason why the cabinet should not have belonged to his family from the start. A shield on the building in the central scene bears the Imperial arms of the House of Hapsburg. It has been suggested that the equestrian figure represents the famous military leader, Prince Eugene; however, a member of the Kevenhüller family, Count Ludwig Andreas, was a Field-Marshall during the same period. Conceivaly the cabinet originally belonged to him.

Marquetry of these materials was also a feature of furniture produced in Augsburg, Munich and other centres in Southern Germany. The attribution to Vienna was traditionally given to the cabinet because Wiener-Neustadt was just south of Vienna, but Khevenhüller did not become Archbishop there until 1734 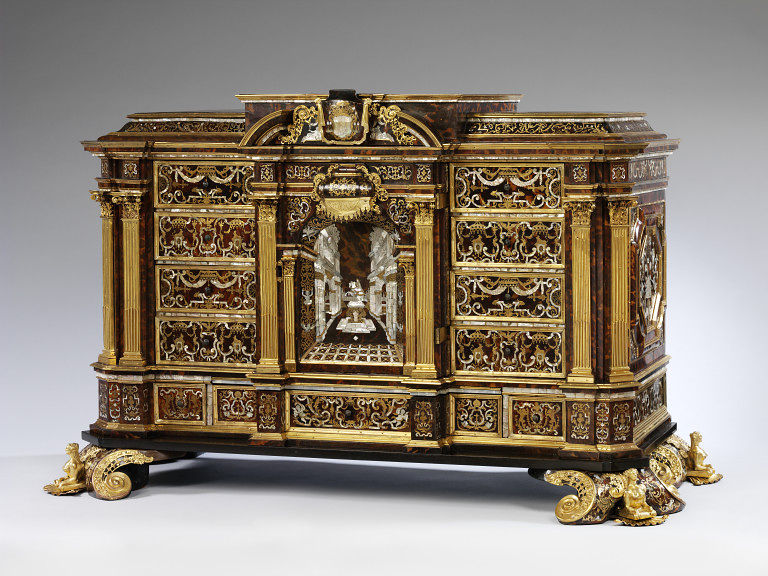