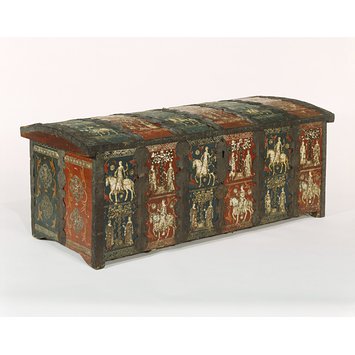 By about 1300, the cassone, or chest, was the most prestigious form of storage in Italian households. This example was most likely made in Florence or Siena: some red or blue 'damsels' chests' (girls' chests) were ordered in Florence in 1384 by Francesco Datini (1355-1410); and a pair are shown in a painting by the Sienese artist Simone Martini (died 1344). Cassoni were often placed around beds and decorated with popular romantic themes: in this case, love is symbolised by figures at 'the fountain of love' and by ladies on horseback with falcons taking part in 'the hunt of love'. This cassone may be one of the earliest known, because the ladies' sleeves, which are cut off at the elbow, were only fashionable during the 1350s.

Poplar cassone, with gesso figures on alternating blue and red grounds and reinforced with flattened iron bands. The figures form three motifs: the lovers' tryst by the fountain of love; a rider (most likely male) with a falcon; and a mounted queen (most likely female with crown?) brandishing a scourge. The feet are triangular wedges are glued to the bottom along the sides. The moulded figures were made of gesso and size and lined with tin foil, covered with yellow lacquer, so as to imitate gold. The sides are decorated with quatrefoils containing heraldic beasts, against a blue and red background vertically divided by one flattened iron band. The back consists of a freely painted dark black trellis pattern on a red ochre back ground with alternating yellow and orange foliate motifs.

The underside is made of one plank, since split, covered with goat hide and the feet are triangular wedges, glued to the bottom along the sides. The joints are concealed by canvass lining on the inside and metal edging on the outside, but it is thought that the sides and the back are linked with dove-tail joints, and the sides with the front with finger-jointing and mitres. The lid is made up of three planks butted together, and it linked to the body of the cassone with four staple hinges and its back edge is lined with a flap of leather. The lid projects over the side and its arched supports joined form underneath serve as handles with which to carry the chest when locked.

Florence (possibly, made)
Siena (probably, made)

ME, FE and FT
These initals are punched on the metal bands on the front, either side of the lock.

The museum was first offered this object in 1890 by Stefano Bardini (1836 - 1922) for £400, but acquired it four years later for for £338 - 5 - 0 (£338.25). Early museum records make no reference to the provenance of this painted cassone. However, Wilhelm Bode (1845 - 1929), Director General of Prussian Museums, who had many dealings with Bardini, states that a number of similar chests had been stored at the Hospital (formerly convent) of Santa Maria Nuova in Florence, before coming onto the art market at about this time. This cassone could well have come from there as well.

Historical significance: A group of chests similar to the V & A's example are to be found in public collections ranging from the Metropolitan Museum of Art in New York to the Fondazione in Venice. They are a rare example of Italian Domestic furniture of the Middle Ages, which can be dated fairly accurately, owing to the fashions worn by the figures: clothes with sleeves that end and trail at the elbow were very fashionable during the the 1350s but beginning to seem rather out of date by about 1360. Furthermore, the distinctive gesso and size decoration of lovers and hunters follows a process described in Cennino Cennini's Il Libro dell' Arte, written in about 1390 and one of the earliest surviving craftsmens' manuals.

Courtly Medieval romances involving the 'Fountain of Love' and the 'Hunt of Love' were frequently depicted on everyday objects ranging from combs and mirror-cases to marriage chests. A number of similar chests with these themes were being made in Florence and Siena from about 1340 if not earlier. A picture by the famous Sienese Artist, Simone Martini (c. 1284 - 1344), The Miracle of the Blessed Agostino, was painted early in the 14th century and clearly depicts chests reinforced with similar distinctive iron bands. However, as late as 1384 Francesco di Marco Datini (1355 - 1410), better known as 'the Merchant of Prato', ordered a pair of chests from Florence 'painted on a vermillion or azure ground' . They were to be 'handsome and showy' and the better they were the more easily he could sell them. Surviving examples in public collections mostly date from about thirty years earlier, but Datini's order of 1384 and Cennino Cennini's description in Il Libro dell Arte (about 1390) of the gesso and size decoration found on these chests both indicate that they (or similar chests) were still much sought after towards the end of this century.

MARRIAGE-CHEST (cassone)
Walnut decorated on red in white
gesso formerly gilt.
One of a pair formerly in the
Church of Santa Maria Nuova, Florence,
the other bearing the arms of Capponi,
and of Bonciani or Larioni, all of Florence.
Based on a hanging with equestrian falconry designs.
FLORENTINE; about 1400.
317-1894.
[1930]
Marriage Chest (Forziere), Italian, (Tuscany) about 1350. Walnut carcase, with gesso applied, and decorated with low relief figures in pastiglia (gesso-duro with a binding element) covered with tin-foil and paint, and reinforced with bands of flattened and punched iron, bearing a number of initials including ME. FE, FT, which probably signify various members of the families involved.
Museum No. : 317-1894.

What is most commonly referred to as Forziere, in Italian inventories before 1500, would seem to have been a marriage chest, often reinforced with iron bars. The process of applying tin foil to pastiglia for this type of decoration is described in Cenino Cenini’s The Craftsman’s Handbook of the 1930s. Appropriate for such a piece of furniture are the themes of love, the fonte d’amore (fountain of love) and the caccia d’amore (hunt of love), shown repeatedly on the front. The sleeves of the women’s clothes were at the height of fashion in the 1350s, disappearing at the beginning of the 1360s. it has been argued on stylistic grounds that this piece was made in Siena but in most documented cases the provenance of forzieri of this unknown workshop has been Florence. (Temporary label) [22/05/1989]
Chest (Cassone), Italian (Florentine): early 14th century. Walnut coated with gesso and painted with red and (originally) bright blue checkers onto which moulded figures of gesso-duro have been applied. The figures and surrounding details were then painted and gilt. The technique is similar to that used for the Italian pastiglia work caskets which mostly date from the late 15th century and early 16th century. A closely m=similar chest in the Castello di Vincigliata, Florence, is probably a pair to this piece and lends colour to the belief that many pairs of chests of this kind were made for important marriages in Renaissance Italy.

[1966]
CHEST (Cassone).
ITALIAN (FLORENTINE); about 1425.
Walnut coated with gesso and painted red and blue with applied moulded figures of gesso-duro. Although this chest is now dirty and abraded, a close examination reveals that it is of extremely fine quality and was originally very brightly coloured. Asimilar example was in the Castello di Vincigliata, Florence.
317-1894 [Pre-2006] 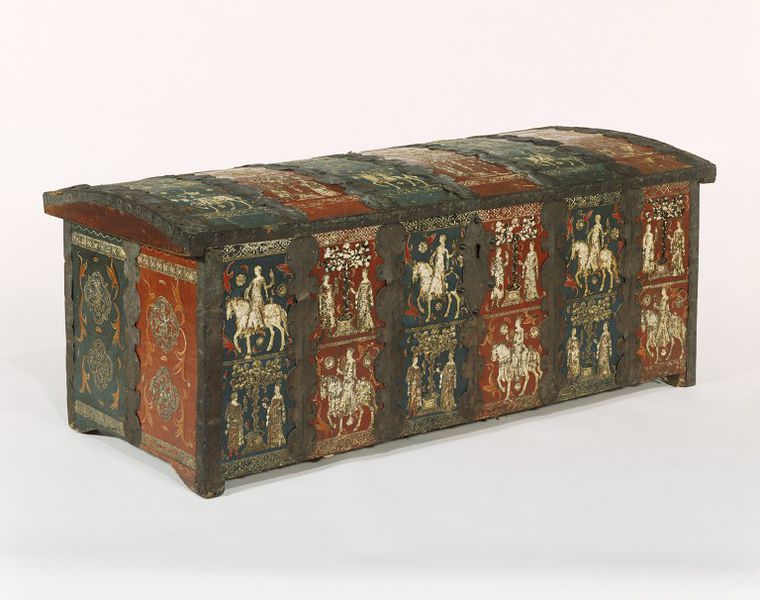