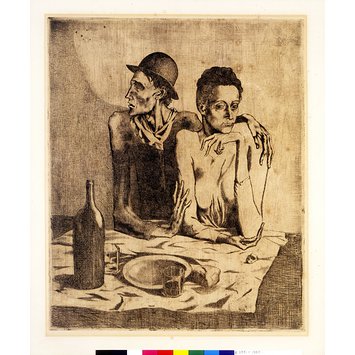 Picasso had no formal training in printmaking, and this print is only the second one he had attempted. In 1904 he had just made the decision to settle in Paris, where he lived for a while in extreme poverty. This print was made on an etching plate that had been used by his friend Joan Gonzales to make a print of a landscape; in Picasso's print, ghostly traces of Gonzales's image can be seen in the upper half. Gonzales also helped Picasso with the printing. Blindness, apart from being a characteristic affliction of the poor, was also an enduring metaphor for Picasso, relating to the struggle for inner vision and creativity.

The plate later steel faced and reprinted by Ambroise Vollard in an edition of 250, in the portfolio Saltimbanques, 1913

Historical significance: The second print ever made by Picasso and the first made after he settled in Paris.

Picasso had no formal training in printmaking and this was only the second print he made. His first attempt was an image of a picador made in Barcelona in 1899. His lack of experience with the medium meant that he failed to appreciate that the image which he worked on the plate would be reversed on printing. With typical resourcefulness he disguised his mistake by giving it the title El Zurdo, which translates as 'the left-handed one'. Perhaps discouraged by this experience, he seems not to have made any other prints until moving to Paris. At the time Paris was a major centre of printmaking, and dealers there encouraged artists to make prints as a means of publicising their work and establishing a reputation; prints were also a valuable source of income.

This etching was made shortly after Picasso had returned to Paris from Spain and had settled in Montmartre. Again the process of making the print revealed that he was still a novice in the field. Rather than work with a fresh plate, he scraped down and re-used one supplied by his friend Joan Gonzales; Gonzales, and Ricardo Canals who had helped him with El Zurdo, both offered practical guidance. Gonzales had previously used the plate to print a landscape, and traces of this earlier image can be seen at the upper right in the impressions taken from the original 1904 plate. Though he compromised in the production of the plate, Picasso took it to the highly regarded printer Eugène Delâtre to be printed up; Delâtre pulled about 30 proofs which were offered for sale by the dealer Clovis Sagot in rue Lafitte. (The original zinc plate was later purchased by dealer Ambroise Vollard; he had it steel-faced and reprinted, and published it in an edition of 250 in the portfolio Saltimbanques in 1913.)

Despite the fact that Picasso had so little previous experience of etching, Le Repas frugal demonstrates an exceptional mastery of the medium. The delicate lines and cross-hatchings describe nuances of light and shade, picking out the angular planes in the face of the male figure, and the sinews in his scrawny neck, as well as the gleam of light on the wine bottle and glasses. When it was printed soft residues of ink were allowed to remain on the plate; this was perhaps intended to disguise the vestiges of the earlier landscape, but it had the effect of creating evocative shadows and emphasising the sombre mood of the scene.

In terms of subject matter and style the image is typical of Picasso's 'Blue Period' (from 1901 to 1904), so called because his paintings of the time - mostly of dancers, acrobats and musicians - were dominated by sombre shades of blue. At this time Picasso, who was himself living in straitened circumstances, seems to have been drawn to such people who were also on the fringes of society, often struggling against grinding poverty. He pictured their miserable circumscribed lives in images which express melancholy and despair, but he also imbued them with a quiet introspective dignity. In this print we see an emaciated couple seated in a rundown wine shop, with the remains of their frugal meal spread on the cloth before them. The etiolated figures here carry echoes of the influence of El Greco (whose masterpieces had made a profound impression on Picasso when he saw them in Toledo three years earlier), but they also demonstrate the survival of Classical ideals of figuration in the art of the early 20th century. It is clear that a mastery of figurative art was fundamental to Picasso's stylistic development, and the basis for his subsequent experiments with the representation of form.

Attribution note: first state. This print is from a plate made by Joan Gonzales for a landscape, traces of which can be seen in earlier impressions before the plate was steel faced by Vollard in 1913. 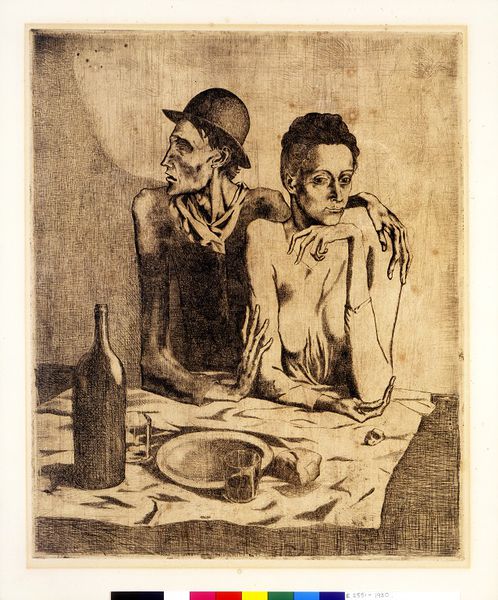