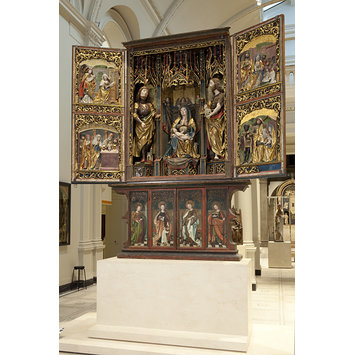 An altarpiece is an image-bearing structure that stands on or behind the altar in a Christian church. According to local tradition, this altarpiece came from the church of St Andrew in Klausen near Brixen (now Bressanone, Italy). The church was rebuilt and extended between 1482 and 1498, and in 1506 Ruprecht Potsch and Philipp Diemer were commissioned to provide the high altarpiece.

This altarpiece would fit into the choir of St Andrew's church. The width (2.27 m) of the predella, the decorated step-like block that supports the main frame, is approximately the width of the existing altar (2.37 m). However, there is no documentary evidence that it came from Klausen. Significantly, St Andrew, the patron saint of the church, is not included in the iconographical scheme.

Three-winged altarpiece and shrine. In the centre a seated figure of the Virgin and Child between two Saints, life size and in full relief. When the altarpiece is open, the sculptures displayed are as follows;
Left wing: The Annunciation (above) and the Presentation at the Temple (below).
Centre (left to right): St Florian, the Virgin and Child with Angels, St John the Baptist.
Right wing: The Nativity (above) and the Adoration of the Magi (below).
Predella: the sculpture is absent.
When the altarpiece is close, the paintings displayed are as follows:
Left wing: St Corbinian and St Adealbert? (above) and St George and the Dragon (below).
Right wing: A Virgin Martyr and St Beatrice (?) (above) and St Martin and the Beggar (below).
Predella (left to right): St Barbara, St Dorothy, St Catherine and St Margaret.

Bressanone ((ital. name for Brixen), made)

Limewood and pine, painted and gilded

Historical significance: On acquisition the altarpiece was classified as German, fifteenth century; Bode agreed with this description in about 1890, but suggested a more precise date of about 1490 (Departmental records). Baum (1923, p. 66) ascribed it to Ivo Strigel (active about 1480 -1516), who ran a workshop in Memmingen in Swabia, citing as a comparison Strigel's altarpiece in the church of St Veit near Tartscher Bühel, dated 1514 (Egg 1985, fig. 296; for Strigel's workshop, p. 373). Scheffler (1967, p. 89) suggested an origin in the Puster valley; this was rejected by Baxandall (1974, pp. 36-7), who attributed it to a workshop in Brixen "influenced by Hans Klocker; the sculptures of the altar are not consistent enough with those firmly associated with Klocker himself" to argue an origin in Klocker's own shop. Müller (1976, pp. 36, 441) agreed with this. The paintings were first published by Kauffmann (1973, pp. 277-9), who classified them as Tyrolese, about 1500, with close parallels to the paintings on the altarpiece from Tramin by Hans Klocker, now in the Bayerisches Nationalmuseum in Munich (Stange 1960, figs. 307-8), which he dated to about 1495 (Scheffler 1967, p. 138, no. 3; Müller 1976, p. 439 proposed a date of about 1485).
Egg (1985, pp. 121-48) published a survey of the artistic achievements in Brixen in the years immediately after Hans Klocker's death in about 1500, and suggested that the main workshops producing altarpieces were dominated by painters such as Nikolaus Stürhofer (active about 1490-1518), and Rupert Potsch (active about 1490 - about 1530), who sub-contracted sculptors from the former Klocker workshop. He ascribed to Stürhofer's workshop the highigh altarpiece in Saubach near Barbian (about 1500-1510) and the reliefs of St Mary Magdalene and St Agnes in the Castello Sforzesco in Milan (ibid., figs. 78, 80). Egg also associated Potsch's workshop with an altarpiece from Lajen near Klausen (about 1500-1510), now in the Tiroler Landesmuseum Ferdinandeum, Innsbruck (ibid., figs. 81-2), as well as the present altarpiece (ibid., p. 137). Potsch collaborated with the painter Philipp Diemer (active in Klausen and Brixen, d. 1516/17), and Egg ascribed the paintings on these altarpieces to Diemer. Egg also attributed to Potsch the altarpiece in the church of St James in Villnöss, dated 1517, although the paintings there were ascribed to Haug Spengler, who joined the workshop after Diemer's death in 1516/17 ( ibid., fig. 86).
Egg's attribution of the paintings of 192-1866 to Philipp Diemer, although speculative, seems convincing. The colour scheme and the facial features of the figure of St Catherine in the upper left wing of the Lajen altarpiece in particular are very similar to those of the Virgin Saint and St Agatha (?)/ St Beatrice (?) in the upper right wing of the present altarpiece. Egg also pointed out that some of the paintings reflect Martin Schongauer's engravings (St Catherine in the predella, Bartsch 1980, p, 271, no.65; St George and the Dragon on the bottom of the left wing, ibid., p. 259, no. 50; St Martin and the Beggar on the bottom of the right wing, ibid., p. 265, no. 56). The ascription of the sculpture, carved ornamental details and other decorative elements, such as canopies to named workshops remains problematic however. The two female saints in the Castello Sforzesco, for instance, ascribed by Egg to the Stürhofer workshop, are indeed closely linked with the figures of the Virgin in the reliefs of the present altarpiece. The quadrilobed ornamental leaves on the bases of the figures of the high altar in Saubach (ascribed to Stürhofer) are also found on the bases of St Florian and St John the Baptist in the present altarpiece and, on a slightly larger scale, on the base of the seated Virgin in the Vilnöss altarpiece of 1517, which Egg ascribed to the Potsch workshop. The canopies of both have the same structure and colour scheme as those of the altarpiece in Saubach. As Egg pointed out (ibid., p.133), many of the altarpieces made in Brixen in the first quarter of the sixteenth century still follow the formula of the altarpiece by Hans Klocker in Pinzon of about 1490/95 (ibid., figs. 53-54), which shows the seated Virgin with the Christ Child flanked by two saints in the corpus, two saints attached on either side, and a superstructure. In addition, the altarpiece by Klocker in the church of the Franciscans in Bozen (about 1495-1500) (ibid., fig. 57), the wings of which depict reliefs of Scenes from the Life of Christ, has a similar format (see also cat. nos. 63; 64). The statue of St Florian from a lost altarpiece in the church of St Ingenuin in Albuin (fig.* ), ascribed to the Klocker workshop (Scheffler 1967, p. 80) is similar to the figure of the same saint in the present altarpiece. The Albuin figure and the present altarpiece must be by the same sculptor, yet these works, although highly distinctive have not so far been stylistically linked with any other piece of sculpture from the Tyrol. This is probably due to the fact that only a small percentage of the estimated total of two thousand altarpieces in this region has survived (Egg 1985, pp.49-50), and a systematic examination of those which are intact or survived in fragments in churches and museums has not as yet been undertaken.

According to a verbal local tradition the present altarpiece is said to have come from the church of St Andrew in Klausen near Brixen (I am grateful to Karl Gruber, Brixen, and Helmuth Stampfer, Bozen, for this information). This church was rebuilt and extended between 1482 and 1498, and in 1506 Ruprecht Potsch and Philipp Diemer were commissioned to provide the high altarpiece, which was to have been completed by 1508; a document dated 1509 notes that the altarpiece was finished but mentions some faults, and work yet to be done: a coat of arms was to be provided, and the reverse of the altarpiece had yet to be painted with floral ornaments "auch hinten an der taffel vermallen mit gewächs" (documents fully quoted in Egg 1985, p.133). Unfortunately there is no mention of the iconographic programme of the altarpiece, but simply a reference to already agreed images: "und sullen die Pild machen wye in die(s) durch Richter, Pfarrer und Burger angezaygt, alles auf Inhald des Spanzedl" (they should make the images as described by the judges, clergy, and burghers, which are listed in the preliminary contract) [this earlier contract does not survive]. Although the size of the altarpiece makes it possible that it fitted into the choir of the church in Klausen, and the width of the predella (227cm) accords approximately with the width of the existing altar (237cm), there is no documentary evidence that the present altarpiece came from Klausen, and significantly St Andrew, the patron saint of the church, is omitted from the iconographical scheme. 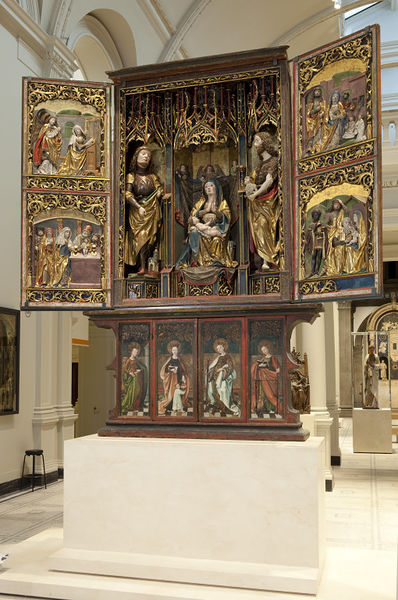