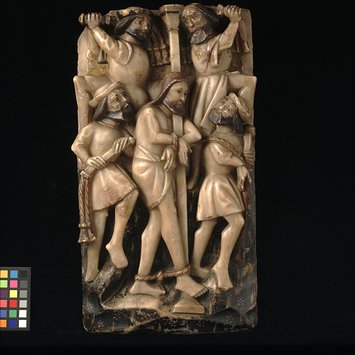 After his arrest, Christ was cruelly tortured. Here, two men beat him, naked except for a loincloth, while another (on the bottom left) appears to be prodding him in the back with the handle of a whip. The ground is decorated with flowers and a wild grass pattern.

There are two sorts of alabaster. Calcite alabaster is very hard and was used in ancient times. This object is made of gypsum alabaster which is a fine-grained, soft and smooth stone. Although at first glance it looks a little like marble, which it was intended to imitate, it was much easier to carve due to its softness, and alabaster objects were therefore significantly cheaper to produce. Marble does not originate in England, so it was imported if needed.

The carving of alabaster, mostly quarried in Tutbury and Chellaston near Nottingham, took on industrial proportions in England between the middle of the 14th and the early 16th centuries. The market for altarpieces and smaller devotional images was a large one. It included not only religious foundations but also the merchant classes. Many hundreds of English alabasters were exported, some as far afield as Iceland and Santiago de Compostela in north-west Spain.

The figure of Christ, with an unusual spade-shaped beard and naked but for a loincloth, stands in the centre of the panel, facing to his left. He leans his left shoulder against a column which his arms encircle. His hands are bound at the wrists, and his feet are tied to the base of the column, the right foot resting on the column base. A bearded torturer, wearing a rolled-brim hat and a tunic, stands on the right of the panel. He looks back up at Christ, holding the rope in his right hand and scourge with the thongs hanging down in his left. A similar figure, his right leg bent at the knee and resting on a projection of ground, stands close to Christ on the left of the panel, prodding Christ with the end of his scourge handle which he holds with both hands. Two more similar figures, the right-hand one hatless, are at the top of the panel, turning and looking inward with their scourges raised, the whip ends hanging down on each side of the column, their outer legs raised and bent at the knee.

The top left corner of the panel is missing. Traces of a daisy pattern in raised gesso work remain on the upper background. Green paint, now darkened, and the usual daisy pattern remain on the ground with white painted feathering. Gilding remains on the upper background and there are traces of colour on the figures, including some dark colour on the faces of the torturers. The hair and beards of the figures are in dark brown and black.

There are four holes drilled in the back of the panel. The lead plugs and wires look relatively modern. The bottom of the panel is cut away. There are two parallel lines scored horizontally across the panel.

2 parallel horizontal lines.
On the back of the panel.; incising

Historical significance: The detail of the binding of Christ's feet is unusual. 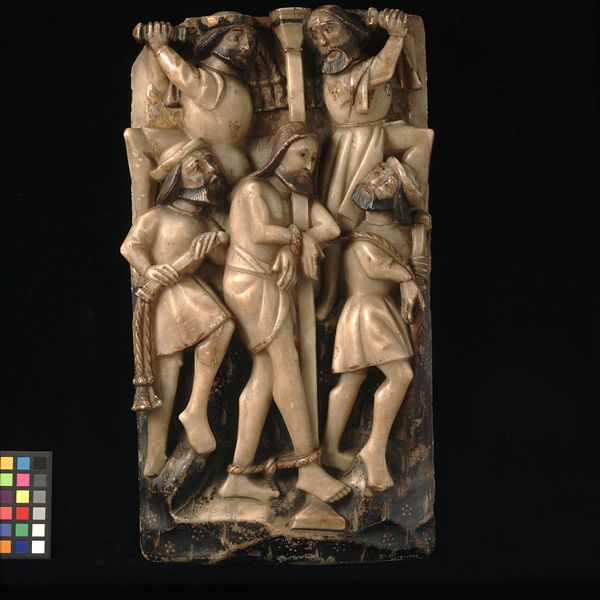