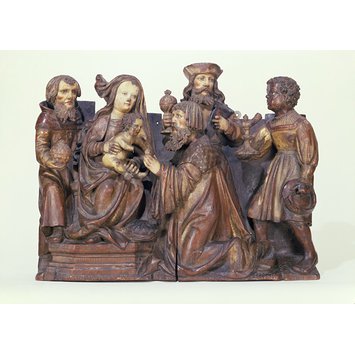 the Adoration of the Magi

This relief probably formed part of a hinged wing of an altarpiece. An altarpiece is an image-bearing structure set on or behind an altar in a Christian church. This example is made from pine wood, which was used predominantly in the Tyrol, a mountainous area in the Alps. It shows the Virgin Mary with the infant Jesus, Joseph, and the three Wise Men carrying their gifts of gold, frankincense and myrrh.

The stylistic features of this relief are in the sculptural style found in altarpieces in Lower Bavaria. This piece may therefore have been carved by a sculptor who had trained in a workshop in Bavaria, but who later settled in the Tyrol.

The Virgin, seated on a bench turns to her left, holding the naked Christ Child, her right hand below his armpit and her left hand on his leg. Her long streaming hair is partly covered by a veil. Behind her stands St Joseph holding the gift presented by the foremost of the kings (Caspar), who kneels in front of Christ, his hands clasped in prayer. Balthasar is on the Virgin's left, holding a goblet in his right hand; he turns his head to Melchior, the younger black magus, who is approaching the scene.
The group consists of three pieces of wood joined together; the back is roughly carved. Three holes have been drilled into the left side, two into the right, and one into the back panel as fixing devices. A crack in the centre runs from the base up through the sleeve of the kneeling King. Losses appear along the edge of the base, and on the hat and sleeve oof Balthasar's left arm. The fingers of the left hand of the latter, two locks of Caspar's hair, the right hand of the Christ Child, the tip of the thumb of Joseph's right hand, and the left part of the drinking horn held by Melchior are missing. Most of the polychromy in the lower part of the relief is lost; only traces of gilding, pigments, and patches of gesso survive. The faces and hands show natural flesh tones. The hair and beards of St Joseph and Balthasar are brown, as is the Child's and the Virgin's hair, while the hair and beard of the kneeling king is grey; the hair of Melchior is dark brown. The cloaks of the three Kings, St Joseph, the mantle of the Virgin, the two goblets, and the drinking horn were originally gilded, the latter with silvered elements. Caspar's fur collar is silvered under a brown glaze; St Joseph's hood, and the lining of Balthasar's cloak, as well as the hat are silvered under a red glaze.

Historical significance: At the time of acquisition these reliefs, which probably formed part of a wing of an altarpiece, were associated with the style of the Nuremberg sculptor Adam Kraft (about 1455/60-1508/9). In about 1890 Wilhelm von Bode suggested an origin in Swabia (Departmental records), but by 1975 (Exh. London 1975, nos. 167-8) they were classified as Tyrolese. Although the type of wood (pine) was used predominantly in the Tyrol, and their provenance from this area seems certain, the stylistic features of the present reliefs are derived from Lower Bavarian sculptures, such as Hans Leinberger's Anna Selbdritt in the Gnadental monastery in Ingolstadt, dated 1513, the two groups depicting the Holy Kindred in the church of St Anne at Neuötting and in the parochial church at Obernburg-am-Inn, and the Adoration of the Magi on the right door-wing of the collegiate church in Altötting (Halm 1927 figs. 6-9; Neumeister 1996, pp. 27-45). The two reliefs may therefore have been carved by a sculptor who had been trained in a workshop in Bavaria, but later settled in the Tyrol, as did Michael Part (see cat. no. 68) in Bruneck/Brunico.

This relief probably formed part of a wing of an altarpiece.

Jopek, Norbert German Sculpture 1430-1540: A Catalogue of the Collection in the Victoria and Albert Museum. London, 2002. cat. no. 696, pp. 148-149
List of Objects in the Art Division, South Kensington, Acquired During the Year 1872, Arranged According to the Dates of Acquisition. London: Printed by George E. Eyre and William Spottiswoode for H.M.S.O., p. 110

The Adoration of the Magi
About 1510–20
The Three Wise Men offer gifts of gold, frankincense and
myrrh to the infant Christ, who sits on the lap of the
Virgin while St Joseph watches intently from behind her.
This relief, together with the piece above, was probably
attached to the painted or gilded background of the wing
of a large altarpiece.
Austria, Tyrol
Painted and gilded pine
Museum no. 1307-1872 [26/11/2010] 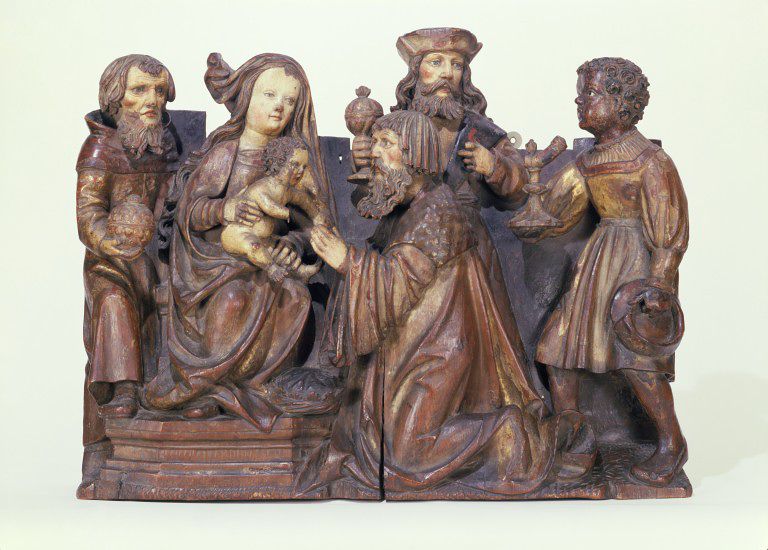