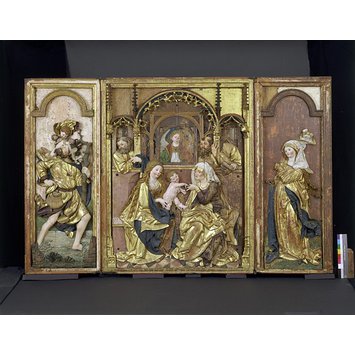 This wooden altarpiece (probably from the Carmelite church in Boppard, near Koblenz) would have stood on or behind the altar in a Christian church. It has two wings, or hinged panels. The left wing shows St Christopher, the right wing shows St Mary Magdalene holding a pear.

Recent conservation of the paintings on the wings has revealed that the areas with original paint are of high quality. They correspond perfectly with the painting tradition in Strasbourg in the period 1500-1520. This suggests that the original painted work on this altarpiece may have been by the anonymous painter known as the Master of the Lautenbacher high altar. He was active in Strasbourg in the period 1500-1525.

The figure is adapted from the Virgin in Dürer 's woodcut of the Visitation from The Life of the Virgin of about 1504 (ibid., p. 179, no. 84.)
The relief is made almost entirely of one piece of limewood, exept for the right hand holding the foot of the ointment jar. The figure is attached to a panel which was originally gilded. Some losses have occurred on the border of the veil and the mantle. The left hand and the ointment jar are missing. The flesh tones correspond with those of the the Virgin in the corpus. The hair is yellow and was originally gilded. The Saint wears a gilded mantle with a blue lining and gilded paper dots. The gown is also gilded with the remains of red glaze, while the veil is white with a gilded border. The blue traces on the veil are later additions. The shoes are black, and the grassy area green with brown pebbles.
The paintings
When the altarpiece is closed, the paintings depict The Virgin and Christ Child on the left side, and on the right side St Anne offering a pear, together representing the theme of Anna Selbdritt (St Anne with the Virgin and Child).
The Virgin and Christ Child
The Virgin is seated on a bench, her head slightly inclined to the Christ Child, who stands on her lap and reaches with both hands towards the pear offered by St Anne.
The later overpaint on the panel was recently removed (fig.*); only fragments of the original painting survive. The background in the upper half was originally painted green- brown while the bench is in a yellow buff darkening to a pale olive in the shaded areas. The central section of the bench is covered with a red cloth. The Virgin wears a malachite-green gown under a grey mantle which is at its palest in strongly-lit areas such as the knees and the left shoulder. The face and the other flesh tones of the Christ Child are naturalistically painted. The Christ Child with golden-brown hair appears to have been swathed in a beige tunic, while highlights are indicated with golden yellow brush strokes on the Virgin's wavy brown hair. Christ's halo is gilded with a decorative blue border, as is the Virgin's, but with additional red rays in cruciform. St Anne offering a pear
St Anne is seated on a bench; she turns towards the Christ Child, offering a pear with her right hand, while a book is held by her left.
The flesh tones are naturalistically painted; the halo is gilded with a blue painted border. The Saint wears a white wimple and a red mantle over a blue-grey gown. The belt is decorated with chequered patterns in buff and white, while the shoes and the book binding are dark brown, the latter with dark brown lines. The background was originally painted green-brown, and the bench shows the same colours and shades as those described above. Some areas of the mantle have suffered serious losses and the background is slightly abraded.

Probably from the Carmelite church in Boppard, near Koblenz (see below). Perhaps purchased in 1818 by Lucie, Fürstin von Pückler-Muskau (1778 -1854), and Hermann, Fürst von Pückler-Muskau (1785-1871), together with fifteenth-century stained glass panels from the same church. Bought by the Museum from Siegmund Stern, Hamburg, for £250 in 1873.

Historical significance: When the altarpiece entered the Museum in 1873 it was said to be "in bad condition" (Departmental records). Several layers of old restorations and the use of Prussian blue indicated that it had been treated in the nineteenth century, although no documentation of this has survived. The first recorded conservation programme took place in 1934, when Professor Ernest William Tristram (1882-1952) treated the altarpiece with beeswax, and may have heavily re-painted some areas (Kosinova/Hubbard 2000, p. 98). A further period of conservation commenced in the 1970s, and continued sporadically through the 1980s; it was resumed in 1994 and completed in 2001. The Science Section of the Conservation Department also analysed the pigments used for the polychromy. A brief report of the most recent treatment was published by Alexandra Kosinova and Charlotte Hubbard in 2000 (Kosinova/Hubbard 2000); a full account will appear after the completion of the work. (Kosinova/Hubbard forthcoming). 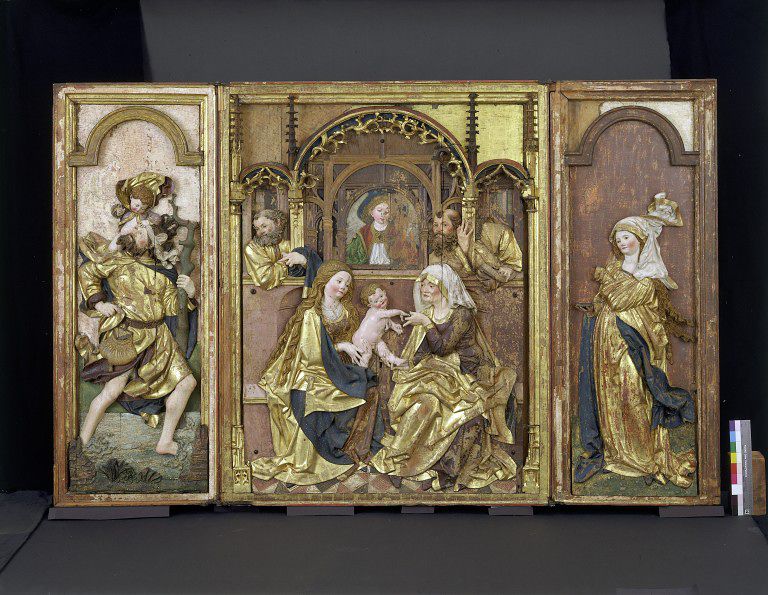