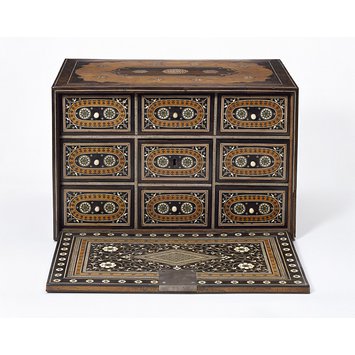 Portable fall-front cabinets of this type held personal effects. They were a basic requirement of European merchants and traders living and travelling in Asia. This piece is a particularly early example. It was made under Portuguese patronage in Gujarat or Sindh in the 16th century or early years of the 17th century. Indian furniture makers produced large numbers of this type of fall-front cabinet. They were traded locally and in Europe, where their exotic materials and decoration made them highly prized. The fall-front cabinet is a European furniture form. However, accounts of the time and details in Indian miniature paintings show that Indians also used them.

Gujarat (probably, made)
Sindh (possibly, made)

Theme - Object Type: Portable fall-front cabinets of this type were designed for holding personal effects and were a basic requirement of European merchants and traders living and travelling in Asia. This piece belongs to one of the earliest identifiable groups of furniture made in India under Portuguese patronage in the sixteenth century.

Theme - Place: The production of such furniture was based in western India, a long-standing centre of luxury goods where there were firmly established merchant communities from the Middle East, South-East Asia, the Far East and Europe. Contemporary accounts differ as to the exact place of manufacture of such articles, suggesting perhaps that there were several centres in western India working in related styles and sharing methods of production. Francisco Pelsaert noted in 1626 that in Tatta, Sindh, 'Ornamental desks, draught-boards, writing cases, and similar goods are manufactured locally in large quantities; they are very prettily inlaid with ivory and ebony, and used to be exported in large quantities to Goa and the coast towns.' Writing at the close of the seventeenth century, Captain Cope confirmed that at Tatta, 'They make fine Cabinets, both lack'd and inlaid with ivory.' By contrast, the early seventeenth-century English traveller William Finch cited the nearby region of Gujarat as a leading centre of fine inlaid furniture. Another English traveller. Sir Thomas Herbert, wrote in around 1626 that at Surat, a leading port in Gujarat, it was possible to buy 'scrutores or cabbinets' of ebony, ivory and mother-of-pearl, while James Ovington noted in the late 1680s that Surat was a source of 'Desks, Scutores, and Boxes neatly polisht and embellisht'.

Theme - Object Type: Whatever their exact place of manufacture, it is clear that portable fall-front cabinets of this type were made in large numbers in western India and were traded both locally and to Europe, where their exotic materials and decoration would have ensured that they were highly esteemed. As with other goods bound for Europe, such cabinets were frequently traded through Goa. Although known as 'German' cabinets, due to the renowned luxury examples made at Augsburg and Nuremberg, this fall-front form seems to have originated in Spain, where it was known as a scritorio or escritorio, from which derived the English scriptor or scrutore (Spanish cabinets of this type were known as varguenos only after the mid-nineteenth century). These cabinets were used for storing private papers and personal effects. Although of western form, fall-front cabinets also came into use by Indians, as is evident from the margin (hashiya) decoration on a Shah Jahan period miniature in the Chester Beatty Library, Dublin, in which it is possible to see such a cabinet being used to store jewellery. 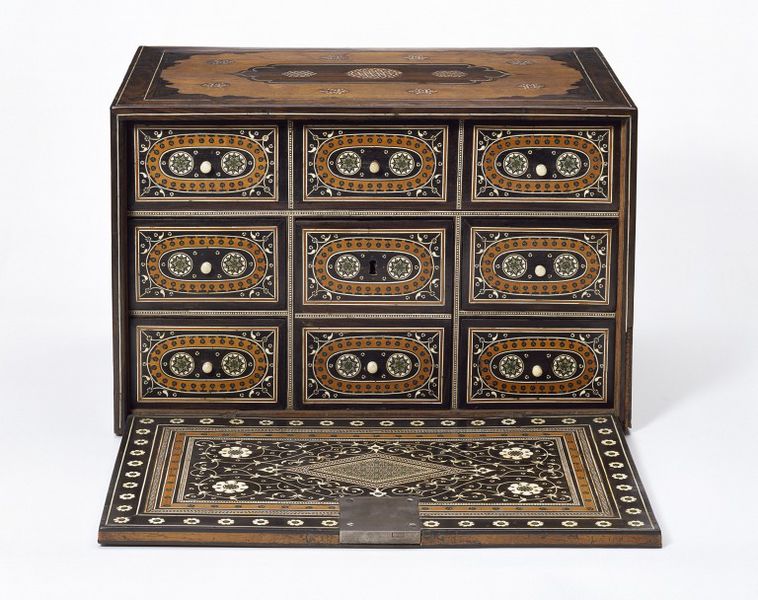