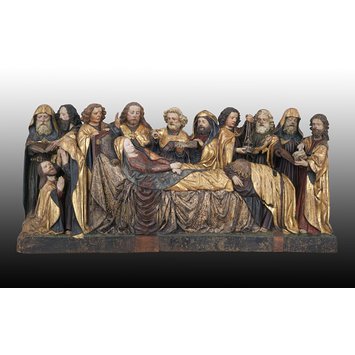 The Death of the Virgin

This carved relief probably formed part of the support or frame of an altarpiece. These image-bearing panels were set up on or behind the altar in a Christian church. The scene here is the Death of the Virgin, who lies in the centre. It was probably originally surmounted by a scene showing the Assumption of the Virgin, the moment when Christ's mother is carried to Heaven.

The high relief on a rectangular base depicts the exequies of the Virgin, who lies on the bed with crossed hands, wrapped in a mantle. Her head lies on a cushion. At the head of the bed are shown a kneeling Apostle, his hands in prayer, and another covering his face with his hands, while St John the Evangelist kneels at the foot of the bed, his head resting on his arms. To the left of the centre stands the blessing Christ with an Apostle whose hands rest on the head-board, and St Peter with an aspergillum in his right hand, dressed in the vestments of a priest with alb, crossed stole, and cope. He holds a book in his left hand which he shares with the Apostle beside him. Next to the latter an Apostle raises a censer into which another pours incense out of the incense-boat held in his left hand. Two pairs of Apostles are in discussionat either side of the composition. The group consists of three pieces of wood joined together. The back has been roughly hacked out, and has four recessed squares niches, each with two circular holes for fixing devices to hold the three pieces together. The figure of the Virgin is slightly worm-eaten. The thumb and the first fingertip of the first Apostle on the right side, the right hand and part of the sleeve of the second Apostle and the right section of the book they hold are later replacements, as are the corresponding part of the book and the toe of the Apostle on the left side. A small piece of walnut has been inserted, running from top to bottom between the second and third Apostles and the back of St John. A separate walnut insertion is fixed to the back of this area. Another insertion of 37x12cm replaces a segment of the drapery of the bed and of the base; a smaller section is inserted in the right arm of the Virgin. The top of the head of the Apostle who holds the censer has been slightly re-carved. Two fingers of the right hand of Christ, and the rod with the brush of the aspergillum are missing.Christ and all the Apostles wear coats lined with blue, except the third Apostle from the left who wears just a gown, and St Peter who wears a gilded cope; the Virgin is wrapped in a gilded mantle with a blue lining. The first Apostle on the left and and the second on the right wear gilt hoods, while the head of the Apostle on St Peter's left is covered with his mantle. Some of the gowns were originally silvered, probably under a green, red or blue glaze, but were later overpainted in different colours. The clasps are gilded, as is the censer boat, while the belts, buckles and St Peter's stole were silvered. The bed, with a red head-board, is covered with a white drapery decorated with a raised pattern in brown; the inner surface was originally silvered under a blue glaze with a pressed brocade decoration in wax on the border, while the pillow is red, and the blue pillow cover is decorated with gilded tassels which have been overpainted in yellow. The faces and hands show a natural flesh colour, although some have been slightly overpainted, as have the hair and beards, in brown and white respectively. The sloping ground is green.

Historical significance: The relief was classified at the time of acquisition as "Flemish; late fifteenth century". Gert von der Osten suggested a German origin in the last quarter of the fifteenth century (Departmental records). The stylistic features suggest an earlier date. The figures are closely related to a relief depicting the Death of the Virgin in the Badisches Landesmuseum, Karlsruhe, for which an origin in the Upper Rhenish area has been suggested, and a date of around 1430-40 (Zimmermann 1985, pp. 134-7, fig. p 137); it also resembles another relief of the same subject in the chapel of St Nicholas in the Minster in Constance of about 1440 (Exh. Constance 1989, p. 127, no. 1.2.26). The present relief, which presumably formed part of a predella or a corpus, was probably originally surmounted by a scene showing the Assumption of the Virgin. Like the one in Karlsruhe, this piece reflects earlier sculptures of around 1400, such as the Apostles in the Musée de l'Œuvre Notre Dame, Strasbourg, from Niedernai (Niederehnheim)/ Alsace (Beyer 1968, p. 50; Geisler 1957, p. 20-1, pl. 32-33), and a relief of Nativity of Christ in the Skulpturensammlung in Berlin (Geisler 1957, pl. 21; Zimmermann 1985, pp. 134-7, fig. p 137), or the relief of the Death of the Virgin, probably Burgundian of about 1400, in the Musée Paul-Dupuy, Toulouse (Inv. no. 18.157, h. 46cm; w. 66cm; I am grateful to Paul Williamson for bringing this sculpture to my attention, and to Mireille Serniguet of the Musée Paul-Dupuy for sending me further information).

Jopek, Norbert German Sculpture 1430-1540. A Catalogue of the Collection in the Victoria and Albert Museum. London. 2002. cat. no. 47. pp. 104-5
List of Objects in the Art Division South Kensington Museum acquired during the Year 1896. Arranged according to the dates of acquisition, with appendix and indices. London: Her Majesty's Stationary Office. Wyman and Sons. 1900. pp.29 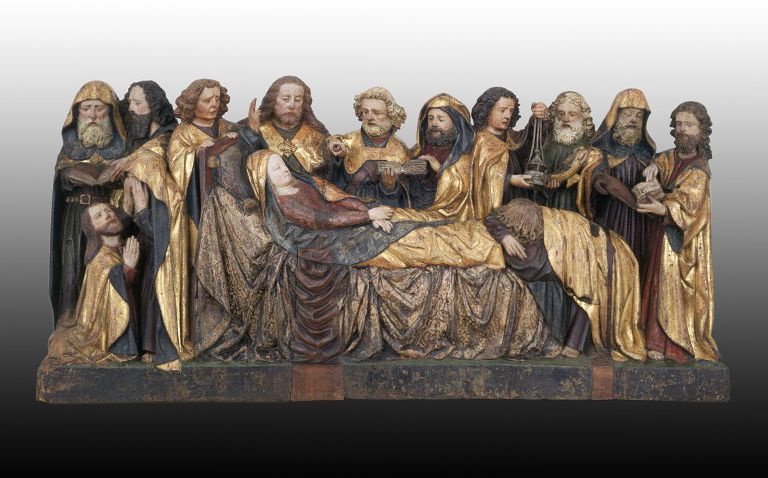