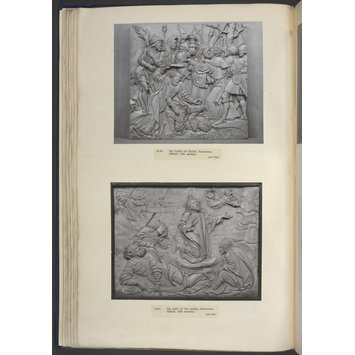 The Taking of Christ

This relief probably once formed part of a Passion cycle (the events surrounding the crucifixion of Jesus Christ). Here the armed mob in the background is coming to arrest Jesus. The carved stone scene would have been set into an altarpiece that stood on or behind the altar of a Christian church.

The composition is based on one of the woodcuts in the Small Passion series by the German artist Albrecht Dürer. These were printed and published in 1511. However, this design involves slight alterations to the soldier's armour and the later addition of the armed half-length figure.

The relief probably once formed part of a Passion cycle, set into an altarpiece. To the right, Christ in profile, surrounded by a group of soldiers, is seen being embraced by Judas, who holds the bag of silver in his left hand. Standing behind Christ a soldier holds a rope in his upraised hand; on the left another stands with a flaming torch, while a third behind Judas reaches out to take hold of Christ. In the foreground St Peter is in the act of cutting off the ear of Malchus, who lies on his back holding a lantern in his left hand, while with his right hand he clutches at the saint's robe.
The composition is based on Albrecht Dürer's woodcut in the Small Passion of 1509, published in 1511 (Bartsch 1980a, p. 122, no. 27), with slight alterations to the soldier's armour, and the later addition of the armed half-length figure at the right edge of the relief.
The relatively thin relief is on a backing of a yellow-pink polished limestone (d. 2cm). A number of cracks run across the right half of the relief, and two sections, that above the heads of three figures on the left, and that comprising the half figure on the extreme right, are additions in a slightly yellower stone.

Historical significance: At the time of acquisition the present relief was associated with the circle of Hans Daucher and the reliefs on the base of the Lamentation group in the Fugger chapel in the church of St Anne in Augsburg. In 1974 Baxandall related the style of A. 41-1947 to the Susannah relief by Viktor Kayser in Berlin, although he hesitated to ascribe the present piece to Kayser, noting "the London relief represents Kayser's starting point, perhaps simply the class of Augsburg sculpture from which he developed; but it may be a work from Murmann's shop in the period 1516-1525, when Kayser was apprentice and journeyman". Müller (1976, p. 80) tentatively ascribed it to Kayser, an attribution followed by Schädler (Exh. Augsburg 1980, vol. II, p. 182, no. 542); the latter concluded that the relief does not exhibit the artist's fully developed individual style, but he saw certain parallels with the relief of Christ taking leave of his Mother of about 1525 in the Bayerisches Nationalmuseum in Munich (Müller 1959, p. 276, no. 286), and two reliefs of Christ and the Apostles in the Museum für Kunstgewerbe in Hamburg of about 1530 (Exh. Augsburg 1980, vol. II, p. 183-4). Eser (1996, p. 315) agreed that the present relief is related to the scenes of the Passion on the base of the Lamentation group, but remarked that the three-dimensional approach of the latter is in stark contrast to the more graphic and flat execution of A.41-1947, and therefore excluded it from what he called the "hypothetical circle of Jakob Murmann (1467-1546) and Viktor Kayser (about 1502-1552/53)". These specific stylistic characteristics are present however in the relief depicting Abraham and Melchisedech, signed VK, for Viktor Kayser, formerly in the Skulpturensammlung in Berlin, but now lost (Eser 1996, fig. 68). In conclusion, despite the analogies with Kayser's œuvre, it is difficult to give a firm ascription until further research sheds more light on the production of Solnhofen limestone sculpture at this date in Augsburg. 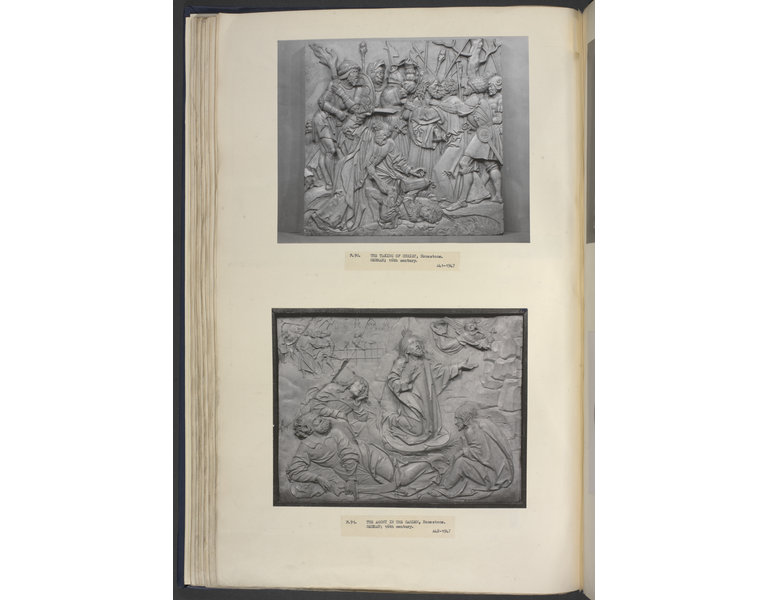