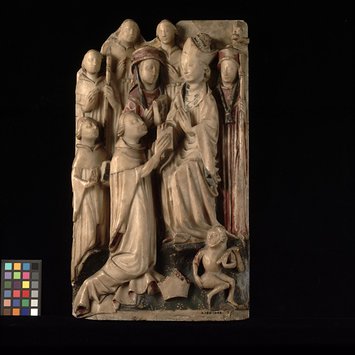 This panel would have formed part of an altarpiece depicting the story of St Thomas Becket, a very popular saint in the Middle Ages. The reverse of the panel has three lines scored on it, indicating that this scene was third in line in the altarpiece. A.167-1946 formed part of the same altarpiece.

The cult of Thomas Becket was important across medieval Europe, and Canterbury was one of the major pilgrimage destinations of medieval Christendom. In spite of this, representations of the saint are relatively rare survivals in English alabaster: there is only one other example of this particular scene extant.

The saint is shown meeting Pope Alexander III at Sens in 1164. Thomas had resigned his archbishopric, and was then reinstated by the Pope in a deliberate demonstration of ecclesiastical power over Henry II. The meeting is described in the Golden Legend. To the right foreground sits the unusual figure of a jester, with a distinctive hooded doublet and bladder over his shoulder.

Green paint and the usual daisy pattern remain on the ground. There is red paint on the cardinals' hats and robes, the edges of which are picked out in gilt, and gilding on the upper background. The back of the panel bears three lead-plugged holes with latten wires attached. The bottom has been cut away.

Historical significance: There is one other recorded example of this subject in English alabaster in the church of St. Mary, Nottingham.

This, with A.167-1946, seems to have been part of an altarpiece depicting scenes from the story of this popular saint. The panel has 3 lines incised on the reverse, presumably indicating that it was third in line on the altarpiece.
The cult of Thomas Becket was a particularly important one across medieval Europe, and Canterbury was one of the major pilgrimage destinations of medieval Christendom. In spite of this, relatively few representations of the saint's story survive in alabaster, and there is only one other surviving example of this particular episode, in St Mary's church, Nottingham. The scene shows St Thomas meeting Pope Alexander III at Sens in 1164, when Thomas had resigned his archbishopric, and was then reinstated as Archbishop of Canterbury by the Pope. The meeting is described in the Golden Legend. The Nottingham panel has a very similar composition to this panel, with the figures of St Thomas and the Pope in virtually identical poses (although St Thomas is tonsured in the V&A panel, and wears a mitre in the Nottingham version), and two similarly flanking cardinals. But the jester, seated in the right foreground of the V&A panel, with his distinctive hooded doublet and bladder over his shoulder, does not feature in the Nottingham equivalent. 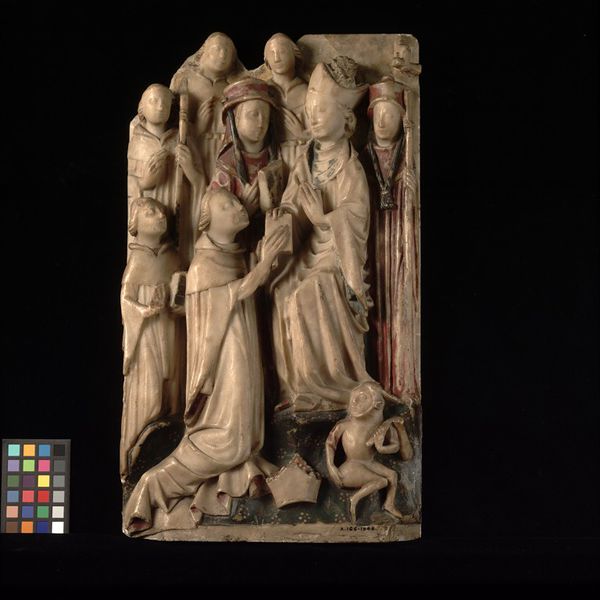