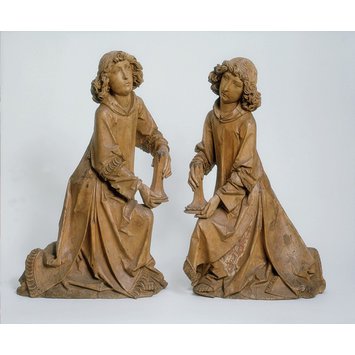 This figure of a kneeling angel is one of a pair. They were designed to flank the tabernacles that held the Holy Sacrament in a Christian church.

This pair are similar to other pairs of kneeling angels by the German sculptor Tilman Riemenschneider (died 1531). The pairs in Rotheburg and Würzburg are larger and more elaborate. The V&A pair are more like the pair in Eisenach. This suggests that two standardised types were produced.

The left angel (A.16-1912) rests on his left knee with his head turned slightly upwards. He holds the foot of a candlestick with his right hand while the stem is held in his left. He wears a beaded headband, an amice, and an alb under the dalmatic, the latter with fringed borders. A.16-1912 is made from three blocks of wood joined together, fixed with iron nails. A vertical joint runs from the bottom of the centre of the figure up to the elbow and horizontally to the left edge forming one block (h. 31.5; w [bottom] 20cm; w. [top] 7cm). On top of this a triangular shaped block has been inserted (h.7.5cm w.6cm). The rest of the figure is carved from a third block (h. 64cm; w. 20.5cm). A circular hole on top of the head, and the slots for the wings have been filled, the left slot with plaster. In the bottom are six holes, one of which is of an irregular shape (diam. 9cm). The top of the candlestick and some locks of hair are missing. A hole for a dowel is drilled into the stem of the candlestick. Some irregular cracks on the edge of the back and the front have been filled with plaster. The big toe of the protruding right foot is a plaster replacement.

Carved limewood, with traces of polychromy

On acquisition (Review 1912, p. 5) the high quality of the carving of the angels was said to be "considerably obscured by a disfiguring coat of modern paint, and by the addition of the clumsily carved wings (see fig. *). The paint was carefully removed, a process which took several months, and the figures are now in their original state." Some traces of an earlier but apparently not original coating (silver over a vermilion ground) were revealed in the deeper folds, and the pupil and iris of the eye are indicated with a black stain, probably painted on by the sculptor himself. Weber (1888, p. 55) noted that the figures were "richly polychromed" ("reich polychromiert") and later remarked that they were "richly gilded ("reich vergoldet") (Weber 1911, p.232). While most of the paint was certainly of nineteenth-century origin, it probably comprised several layers of polychromy from different periods. The statement in the Review (1912, p. 5) that the "figures are now in their original state" almost certainly reflected the opinion, commonly held among scholars of the time, that most of Riemenschneider's sculptures were unpainted, although glazed and with certain details indicated (see cat.no.19). A recent examination of the traces of polychromy which remain on the alb, the fringe and the braid above the fringe of the dalmatics of both figures and the hair of A.16-1912 revealed some new facts about the polychromy: the albs were originally silvered, the fringes of the dalmatic blue, the braid above the fringes gilded, and the hair a light golden brown. The overpaint of these areas tended to imitate the original colours. The first layer on the alb red; the second and third repaintings were silver. The fringe was overpainted blue on the first, and then silvered with a green glaze the second and third time (report by Josephine Darrah of 2 June 1997; Departmental records).
The exact provenance of the angels is uncertain. According to Weber (1888, pp.54-55) they originally belonged to the parish church in Külsheim and were removed in 1771 to Wolferstetten and kept (although not owned) by the gilder Gustav Seitz in Külsheim. Oechelhäuser (1898, p.179) stated that they were the property of the gilder Seitz in Külsheim and that they were subsequently sold to the collector Carl Streit in Kissingen. However, Carl Streit's entire collection was acquired by the Bayerisches Nationalmuseum in Munich in 1890 and the angels were clearly not included. According to Weber (1911, p. 232) the figures were transferred to Wolferstetten from Tauberbischofsheim in 1771, where plaster casts remained. These plaster casts later formed part of the Neo-Gothic high altar which was created by the Seitz brothers in 1846 (Oechelhauser 1898, p. 176, pl. XIV and fig. 53), replacing a baroque altarpiece. The mayor of Wolferstetten declared in 1912 that the pair was bought in Würzburg at the time the chapel in Wolfferstetten was erected in 1764, whereas the verger of St. Martin in Tauberbischofsheim reported in 1912 that he suspected that the figures had been stolen from that church in about 1840 (Museum records).

Historical significance: The angels were acquired in 1912 as the work of Riemenschneider. Their existence was already well known to specialists, having been published by Weber in 1888 and in 1911, and by Tönnies in 1910. Bier (1930, p. 38, note 1) compared them with the angels holding the reliquary cross in the superstructure of the Holy Blood altarpiece in Rothenburg (Bier 1930, pl. 84), installed in 1502. He emphasised the superior quality of the London pair compared with the group in Rothenburg which he considered to be a workshop product. Although he stated that he would discuss the angels further he never returned to them in detail. He omitted the London angels in his list of Riemenschneider's wood sculptures of 1978 (Bier 1978, pp. 148-154), but they were included in 1982 (Bier 1982, p.119) in the list of "Works attributed on the basis of style". Baxandall (1974, p.46) confirmed the relationship with the Holy Blood altarpiece, while Kalden (1990, p. 111 and note 411) recapitulated the observations of Bier (1930, p. 38) that the angels in Rothenburg were based on the angels on the base of the tomb of Prince-Bishop Rudolf von Scherenberg in Würzburg Cathedral of 1496-1499 (Bier 1925, pl. 53), and suggested a date during this period. The present pieces are comparable with other pairs of kneeling angels from Riemenschneider's workshop: those in the predella of the Holy Blood altarpiece in Rothenburg holding the Instruments of the Passion (Bier 1930, pl. 85; h. 53cm and 56cm); and another pair in the Mainfränkisches Museum in Würzburg (Muth 1982, pp.130-31; h. 56cm and 58cm). These are more elaborate, with a billowing cope over the dalmatic whereas the angels in London are smaller, and analogous to the pair in the Wartburg-Museum in Eisenach (Lehfeldt/ Voss 1917, p. 282, both h.65cm). It seems probable that two standardised types were produced, of a similar size, to flank tabernacles of the Holy Sacrament: one elaborate, like the surviving pairs in Rothenburg and Würzburg, the other type similar to the present pair that in Eisenach, although the latter figures are inferior in quality. Moreover the pair in London and Eisenach reveal the same facture, being made of three elements of analogous shape joined together.

Probably from the parish church in Külsheim in Baden. 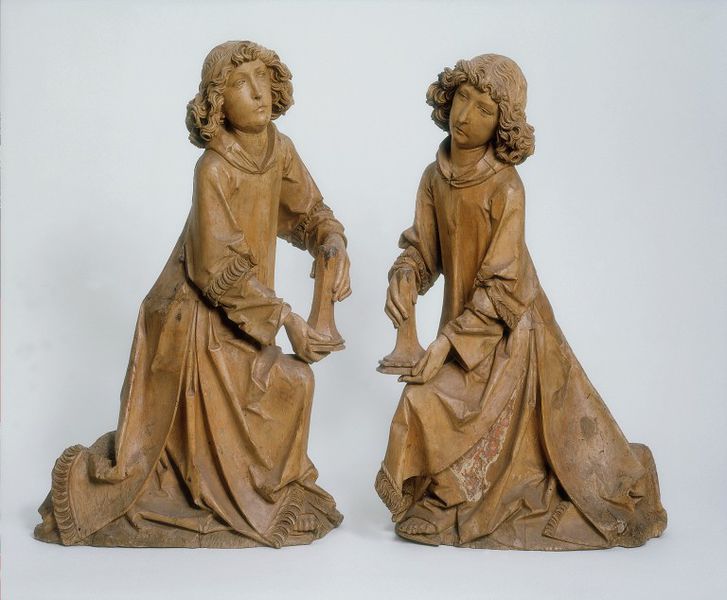