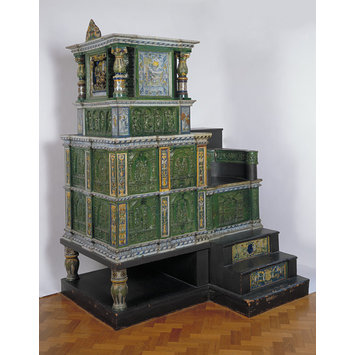 The German-speaking lands in northern Europe developed a sealed wood-fired stove for heating large rooms. These efficient stoves were mounted so that the stokehole and flue were behind the wall. This allowed the room to be completely free of fumes and smoke. Moreover, the stoves could be built to almost any size using deep moulded tiles. These were not only decorative but also provided the maximum surface area for heating.

Tile-stove, with rectangular fire-box supported by legs, surmounted by a tower of rectangular form. A chair is attached to the stove. The stove is composed of panel-type moulded lead-glazed earthenware stove tiles, with some tin-glazed painted tiles. The painted tiles round the upper part show the Crucifixion, the Sacrifice of Isaac, and figures symbolic of the Planets. The Triumph of Mordecai is modelled in the round and in high relief, with polychrome glazes. The remaining panels are moulded in relief, with monochrome green glaze, and show the Virtues and the Patriarchs with their families. The tiles depicting the Lives of the Patriarchs and the Divinities of the Planets are after Sebald Beham. The Crucifixion follows an engraving in the illustrations of the Old Testament by Vergil Solis, published in Nuremberg in 1562. The stove is signed by the potter Hans Kraut and two of the tiles bear the date 1577.

According to Kornhas (1932), the stove was formerly at Engen im Hegan, in a house in the Market Place to which it is believed to have been removed from the Convent of St Wolfgang when it was dissolved at the beginning of the 19th century. From Engen it passed to Schilling at Villingen who sold it to the dealer Meder of Paris for 200 guilders, from whom it was bought for the museum.

Historical significance: According to Lane (1960), the stove "is an exceptionally magnificent example... [which] combined the usual German technique of decoration in relief with that of painting on a flat tin-glazed surface, an Italianizing fashion more at home in Switzerland and the Tyrol."

Closed wood-burning stoves have provided a way of heating buildings in central Europe since the thirteenth century. Conical ceramic tiles were inserted into the stone and mortar walls of the stoves in order to increase the radiation of heat. By the fifteenth century, however, these early stoves were replaced by others with walls built entirely from inter-connecting ceramic tiles. Initially niche-type tiles were used, but by the sixteenth century most stoves were constructed from rectangular panel-type tiles. These had deep flanges at the rear to help retain heat, while the front surfaces had relief-moulded decoration enhanced with coloured lead glazes, or else had painted tin-glazed decoration. This latter type became particularly popular in Switzerland and Austria, where the maiolica technique was introduced during the 16th century.

The typical late medieval tile-stove took the form of a large rectangular fire-box, supported on masonry or legs, and topped by a tower to provide a greater surface for the radiation of heat. Though essentially free-standing, the stove would be positioned against a wall in which openings had been cut to connect to a stoke-hole and flue at its rear. This allowed the stove to be stoked directly from an adjacent room, and for fumes to be extracted. The cleanliness of the room in which the stove itself was situated was thus ensured. Only in the eighteenth century did stoves stoked from an opening in the front become standard.

The use of tile-stoves became widespread in the colder climates of central and northern Europe, from Germany, Austria, and Switzerland eastwards to Hungary and Poland, and throughout the Baltic regions and Scandinavia. In the fifteenth and sixteenth centuries, stove tiles were also exported from Germany for use in the Netherlands and England, and local manufacture was practised in these countries for a time. Initially, tile-stoves were to be found only in castles, palaces and ecclesiastical buildings, but increasingly they also came to be used in the houses of wealthy citizens. This more widespread use became established in Germany as early as the fourteenth century. In England, where tile-stoves were in any case far less common, they appear to have been confined to royal or ecclesisatical sites until the mid-sixteenth century. Ceramic stoves continue to be used in some parts of Europe.

TILE-STOVE
Built from earthenware stove tiles
GERMAN; dated 1577
This stove was made by Hans Kraut of Villingen for the Convent of St. Wolfgang at Engen, Baden. It combines the usual German technique of decoration in relief with the Swiss or Tyrolian method of painting on a flat tin-glazed surface. Subjects depicted include Biblical scenes, the Patriarchs with their families, the Virtues and figures symbolical of the Planets.
498-1868
Label for stove when displayed in Gallery 141 before redevelopment of the Ceramics Galleries (2005-09) and before its move to the new Medieval and Renaissance Galleries in 2009. [ca.2000] 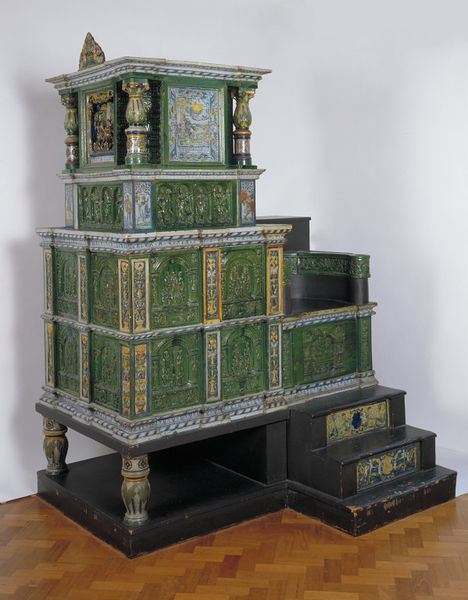