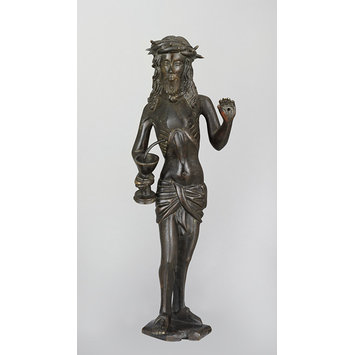 Christ as Man of Sorrows with a chalice

This figure was probably originally fixed onto a tabernacle door. It is highly likely that it was produced in Luebeck because of its close stylistic affinities to the statuette of Christ as a Man of Sorrows attached to the tabernacle of the sacrament house in the church of St Mary in Luebeck.

Christ, with shoulder-length hair, wearing the crown of thorns and a loin-cloth, stands on a flat hexagonal base, his right foot projecting slightly over the edge. He raises his left arm to show the wound in his hand, and holds a chalice with his right hand into which flows a jet of blood from the wound in his side.
The statuette is a solid cast; the thorns of the crown and the wire indicating the jet of blood pouring into the chalice are made separately. A triangular indentation at the front of the base probably facilitated fixing. A hole of 0.05cm has been drilled into the top of the head.

Height: 26.7 cm Base to top of figure's head., Width: 10 cm Approximate, taken across the arms of the figure, Depth: 6 cm From front to back of base

Historical significance: This bronze monument was commisioned in 1476 by the church elders, and completed in 1479 by the founder Claus Grude (active 1466-93) after models provided by the goldsmith Claus Rughese (active 1469-about 1491) (Rosenberg 1923, no. 3156; Hasse 1983, pp. 99-100, fig. 53.2). Although the present piece represents a different iconographic type (the Man of Sorrows in Lübeck points with his left hand to the wound in his side), and is of a different size (h. approximately 45cm), the facture (it is also a solid cast), and certain details, such as the distinctive rib-cage and the facial features, closely link the pieces in London and Lübeck, and they may have originated in the same workshop in Lübeck.

On acquisition it was suggested that the present figure, which was probably originally fixed onto a tabernacle door, was produced in Lübeck because of its close stylistic affinities to the statuette of Christ as Man of Sorrows attached to the tabernacle of the sacrament-house in the church of St Mary in Lübeck (Register file in the Department of Metalwork, Silver and Jewellery).

CHRIST AS THE MAN OF SORROWS WITH A CHALICE
Bronze
German (perhaps Lubeck); about 1500
The image of the blood pouring from Christ's side into the chalice became common in the late Middle Ages as a result of a vision experienced by a nun in the convent of Katharinenthal. The figure was probably set on the door of a tabernacle in which the consecrated bread and wine were kept. 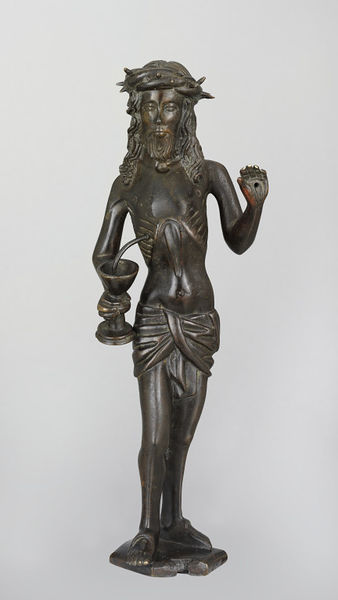