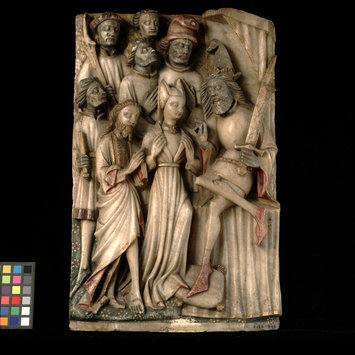 St John the Baptist before Herod

This is an alabaster panel, depiciting St John the Baptist reproving Herod Antipas, made in England in 1480-1490. Dressed in a camel-skin cloak (notice the camel’s hoof by his left foot), John the Baptist scolds Herod, King of Jerusalem. After executing his first wife, Herod had married his brother’s wife, Herodias. The busy, crowded composition and earnest expressions of the figures are typical of late 15thcentury alabaster panels.

There are two sorts of alabaster. Calcite alabaster is very hard and was used in ancient times. This object is made of gypsum alabaster which is a fine-grained, soft and smooth stone. Although at first glance it looks a little like marble, which it was intended to imitate, it was much easier to carve due to its softness, and alabaster objects were therefore significantly cheaper to produce. Marble does not originate in England, so it was imported if needed.
The carving of alabaster, mostly quarried in Tutbury and Chellaston near Nottingham, took on industrial proportions in England between the middle of the 14th and the early 16th centuries. The market for altarpieces and smaller devotional images was a large one. It included not only religious foundations but also the merchant classes. Many hundreds of English alabasters were exported, some as far afield as Iceland and Santiago de Compostela in north-west Spain.

The saint is represented with long hair and a forked beard. He wears a cloak draped over his right arm over a camel-skin, the hoof of which trails on the ground, leaving his legs bare. He stands on the left of the panel, holding a closed book in his left hand and pointing with his right hand towards the figure of Herod Antipas. The bearded Herod, wearing a crown surmounted by a devil's cap and a low-belted doublet and hose, is seated cross-legged on a draped and canopied throne, his left leg hanging down and resting on a tasselled cushion. He holds a falchion in his left hand, which rests on his shoulder; his right hand is raised. The figure of Herodias, wearing a horned headdress, a necklace with a rose pendant, and a belted V-necked gown over a robe, stands between Herod and the saint in the middle of the panel. She holds the revers of her gown and her left foot rests on the cushion. A beardless figure wearing a short belted gown stands looking up on the left of the panel, holding a staff in his right hand. Four other figures stand at the back of the panel, one on the left holding a falchion in his right hand and one on the right wearing a hat with a bag-shaped crown and a rolled brim.

The servant's staff on the left of the panel is broken off. The bottom edge of the panel has been chipped in the middle and repaired. Green paint and the usual daisy pattern remain on the ground at the bottom of the panel. Gilding is on the hair and beard of the Baptist and on his camel-skin. The edges of the robes of the other figures are gilded. The upper background is gilt with traces of gesso knobs. There are traces of red on Herod's shoes and on the folds of his and the Baptist's garments. The faces and hands of all the figures save the Baptist and Herodias are darkened.

The back of the panel is marked. There are three lead-plugged holes. There is a ridge from the top of the panel to the bottom indicating where two saw cuts have met.

On the back of the panel.

Formerly in Genoa, perhaps in the cathedral. In the possession of P. Nelson from whom it was acquired by Dr W.L. Hildburgh. On loan from him since 1926. Given by Dr Hildburgh in 1946. 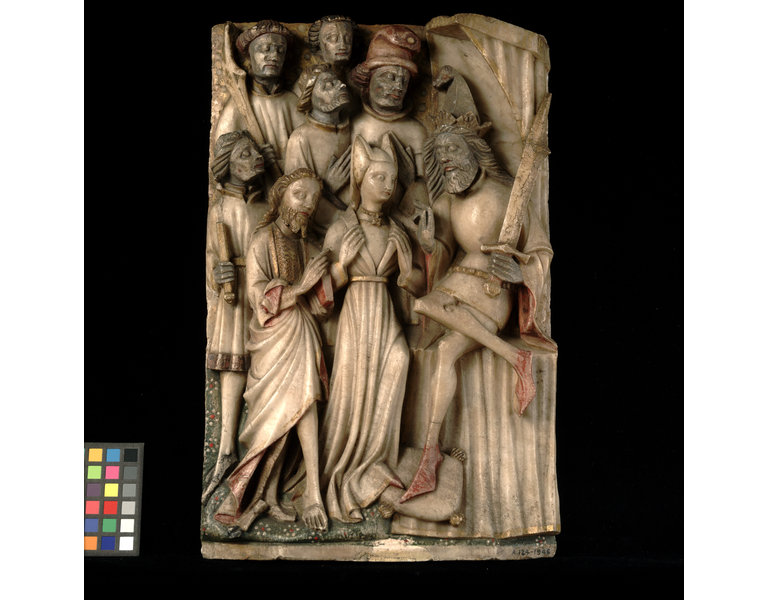