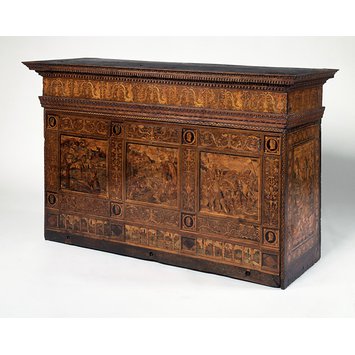 Since about 1530, cabinets have been used for storing valuables and documents. This example is decorated with the Pillars of Hercules, the personal emblem of the Holy Roman Emperor Charles V (reigned 1519-1559), on the inside of the lid. The cabinet is thought to have been made for the emperor's apartments in the Castello di Gonzaga when he visited Mantua in northern Italy in 1532, which would make this the earliest known European cabinet to survive.

Cabinet, with a carved cornice and inlaid frieze of grotesques immediately below, inlaid sides depicting the allegorical figures Temperance and Justice, and an inlaid fall-front lid divided into three sections (decorated with medallion heads of Roman emperors in corners) telling the story of Gideon, on the outside, and emblazoned with the Pillars of Hercules, the emblem of Charles V with the motto 'PLUS ULTRA' on the inside. The fall-front opens to reveal two side doors decorated with intarsia still lives, and a nest of drawers decorated with putti, cornucopiae and grottesques, with iron dolphin motif handles. The central drawer in the top row has two putti holding up a tablet inscribed DM (Domus Mantuae).

The main body of the cabinet is made up of four planks, forming the top, bottom and sides, with mitred corners at the top and dovetails cut into its top and underside. The back board is made up of one large rectangular piece of walnut and nailed to the edges of the four planks, and also by a series of interconnecting boards that make up the drawer cavity. The fall-front lid is made up of a central panel with a four-sided frame, mitred at the corners. At a later stage, the part of lid covered by the left hand Gideon panel on the front was sawn off and subsequently stuck together again. The repair runs across the motto-bearing ribbon, between the ‘V’ and ‘S’ of PLVS OVLTRA. The top edge of the lid has been reinforced with a rail.

The carcase is joined to the cornice with two iron bolts and nuts (19th c.?). The latter are accommodated in two roughly hewn pits in the floor of the cornice, which may have replaced two smaller and earlier holes. The fall front lid is attached with linges at the bottom, with hinge plates nailed to the inner side. The lid of the cornice is attached to the top of the cabinet with two sets of loop hinges, and when closed it forms a mitred fitting with the sides.

The inside of the drop-front lid is emblazoned with the inlaid 'Pillars of Hercules' emblem of the Holy Roman Emperor Charles V (reigned 1519 - 1555) and his motto PLUS OULTRA, and decorated with a number of St. Andrew's crosses. It has been suggested that this cabinet may have furnished the apartments of the emperor, when he visited Mantua in November 1532 to celebrate the the feast of St. Andrew, a year after he bestowed upon Ferrante Gonzaga (1507 - 1557) the order of the Golden Fleece, the biblical story of which is illustrated on the outside of the fallfront. Stefano Bardini acquired this cabinet from Custozza, a Gonzaga palace between Verona and Mantua, before selling it to this museum with a number of other items, totalling £ 2,450, in 1891. In the course of its history, part of the drop-front lid was sawn off and stuck back together again, and the edge was reinforced after the repair.

The stand was probably assembled not long before the cabinet was acquired by the Museum, but the high quality of the carving of the brackets suggests that they were taken from an earlier piece of furniture.

Historical significance: If this example was made by 1532, then it is one of the earliest datable writing cabinets made in Europe to survive. Such a piece of furntiure would evolve into a travelling trunk (like that of Edward VI) or chest o' drawers, which would eventually supplant the Italian marriage chest of cassone. The protoype for such furniture is Spanish, but this work is undoubtedly the work of Italian craftsmen, who show no signs of Hispano-Moresque influences: decorative motifs are entirely classical, and even if the story on the front of the cabinet is from the Old Testament of the Bible, the figures are clad like Roman soldiers. However, connotations with both the Order of the Golden Fleece and Ancient Roman Emperors, whose medallion portraits appear on the front, would have been regarded as highly complimentary to a Holy Roman Emperor by the time this cabinet was made.

Cabinets were lavishly decorated, as they were the most prestigeous pieces of storage furniture during the 16th century. Bridal chests from Catalonia, known as hembras were perhaps the earliest pieces of Western European furniture to be fitted with drawers and they developed into writing cabinets which stored documents, known as escritorios. They were widely used throughout Spain's possessions in Europe and neighbouring states, such as Mantua. Spanish examples were often decorated with Islamic motifs, but this early example is Italian and looks to classical motifs for inspiration.

On the front, busts of Roman Emperors and three marquetry panels representing scenes from the Old Testament history of Gideon. On the inside of the fall front the motto and devices of the emperor Charles V, sovereign of the order of the Golden Fleece, to whom the left-hand panel (Gideon praying before the Fleece) may refer.
The left-hand side panel is a nineteenth century replacement.
11-1871. [Pre-2006] 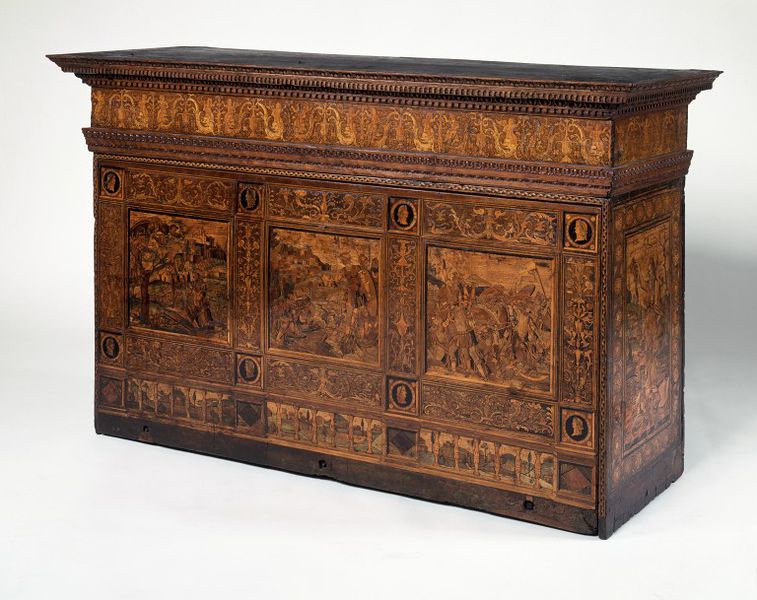