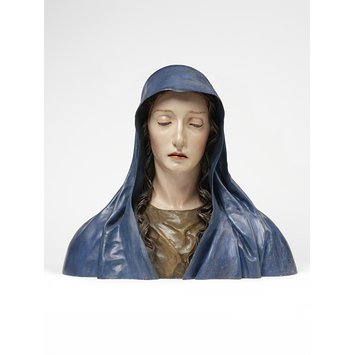 The Virgin of Sorrows

During the seventeenth and early eighteenth century busts of the sorrowing Virgin (Dolorosas) were widely produced in Spain. They were often paired with a corresponding bust of Christ as Man of Sorrows, displaying the wounds suffered at his crucifixion. As well as recalling fifteenth-century Netherlandish devotional paintings, they are also reminiscent of reliquary busts, which would have been placed on side-altars and which contained saints' relics. For these reasons such sculptures were redolent of pious devotion. They are often to be seen in churches and convents throughout the Iberian peninsula, especially in Andalucía.

This bust is ingeniously constructed from separate pieces of pinewood, with eyes probably made of glass, and teeth of ivory. It has not been possible to ascertain whether the eyes are indeed of glass; they may be painted ivory. The ringlets of hair are made of corkscrews of wood-shavings. Some of the original colour of the sculpture has been lost: the robe would almost certainly have once had an olive green lustre, its sheen enhanced by gold powder. The blue veil would also have once been more luminous; powdered blue frit or glass was probably applied to it with a brush. The blue paint probably contains lapis lazuli, added to paint to obtain a deep blue. Traces of tears might well have been visible on the cheeks; these have now been lost. Nevertheless, despite the changes of surface wrought by time, the simple power of this piece is still strongly apparent. The strength of feeling is seen in the fine rendering of the Virgin's mournful facial expression, and the piece's mimetic qualities are to be felt in the virtuoso carving of the crumpled veil. The bust exemplifies how Spanish artists could convey intense emotion and religious power through apparently plain naturalistic forms.

Although formerly attributed to Pedro de Mena, the style of this work is unmistakeably that of José de Mora, who was a generation younger than Pedro de Mena. José de Mora came from a family of sculptors, and was active in Granada and Madrid in the late seventeenth and early eighteenth century. In 1672 he was created Court Sculptor (Escultor de Cámara) in the service of the last Hapsburg king of Spain, Charles II. He specialised in devotional polychromed wood sculptures, the most celebrated of which was a full-length Virgin of Sorrows, installed in the church of Sta Ana in Granada in 1671. A contemporary chronicler recorded that it was taken through the streets of the city to be installed there at midnight, accompanied by a devout congregation holding torches, and that it miraculously healed a woman gravely ill, as it passed by her house.

This bust of the Virgin Mary may have been paired with one of Christ, crowned with thorns and sentenced to die. Its realistic appearance would have encouraged worshippers to imagine the Virgin’s sorrow at her son’s suffering as their own. Woodshavings were used for the hair and lapis lazuli for the colouring of her robe. The Virgin’s cheeks probably once ran with painted tears.

‘I saw her in the dress of Our Lady of Solitude,
with a long headdress. Her eyes were lowered, looking
toward the earth; her nose was straight; she was entirely
beautiful, with a colour like marble when it is very
white and has no pink at all.’ [09.12.2015]
THE VIRGIN OF SORROWS
Spanish (Granada); after 1671
Painted pinewood, ivory and glass
By José de Mora

The mourning virgin was a subject widely depicted in the second half of the seventeenth century, particularly Andalusia. This bust is of great technical virtuosity: glass eyes and ivory teeth have been inserted into the face from behind. The surrounding crumpled veil and corkscrew ringlets are separate pieces of wood. José de Mora came from a family of sculptors in Granada, and was appointed Court Sculptor (escultor de Cámara) in 1672.
[1993 - 2011] 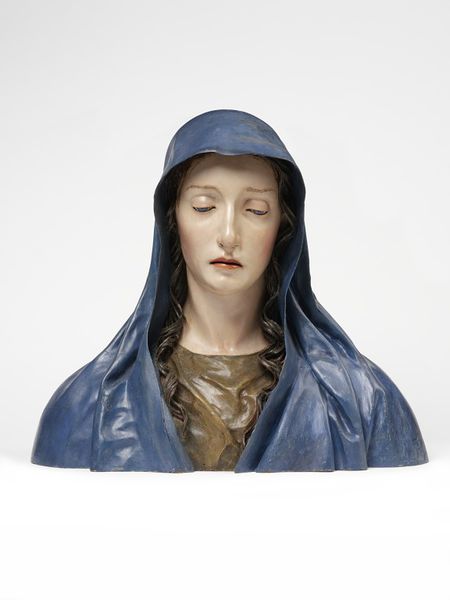