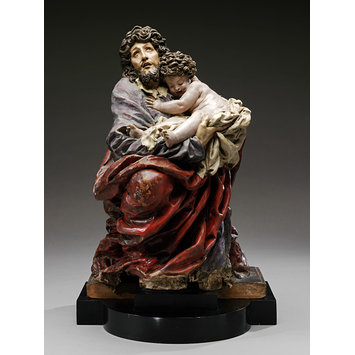 St Joseph with the Christ Child

St Joseph is shown dressed in an abundance of drapery kneeling forward, holding the infant Christ in his arms. The sculpture is modelled in painted terracotta, and fabric (probably linen) stiffened with gesso. Both the use of colour and the intense feelings of devotion seen in the facial expression of St Joseph are typical for Spanish sculpture of this date. The cult of St Joseph, who is here shown as a relatively young father, became widespread in Spanish art during the 17th and 18th centuries, following the Catholic Reformation. He was frequently depicted alone with the Christ Child. The sculptor, José Risueño, who was active in Granada, specialised in terracotta (baked clay), although he also worked in stone and wood. The style of this piece suggests it dates from relatively late in the sculptor's career, as it relates to a wood group he executed for the high altar of S. Ildefonso in Granada dating from 1720 onwards. This terracotta was purchased for the Museum in 1863 in Granada, Spain; it may have originally served as a devotional item in a chapel.

ST JOSEPH WITH THE CHRIST CHILD
Spanish (Granada); about 1720
Painted terracotta on a wood base, with additions of fabric
By José Risueňo (1665-1732)

In Spanish art of the seventeenth and eighteenth centuries following the Catholic Reformation, St Joseph is frequently depicted alone with the Christ Child. Here his upward gaze seems to reflect a presentiment of the Passion. Risueňo was active as a painter and sculptor, and appears to have spent his whole life in Granada.
[1993 - 2011] 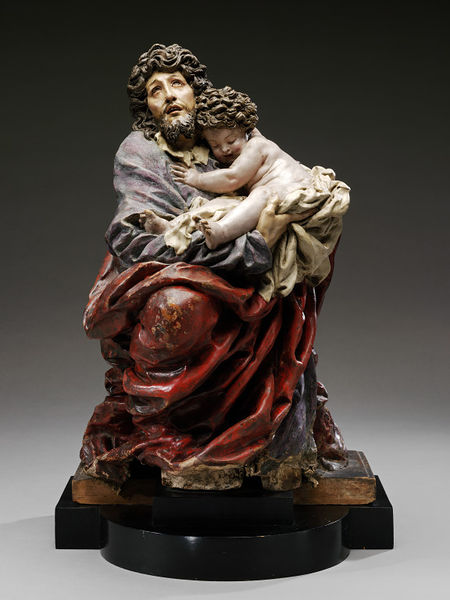