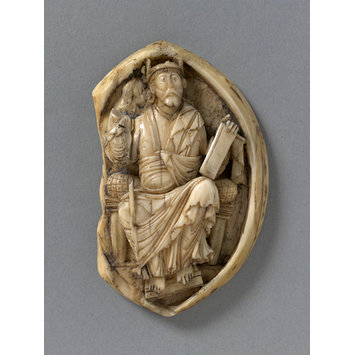 Christ is seated on a cushioned throne and holds a book in his left hand and a staff (now partly broken) in his right. On its acquisition in 1928 the relief was made up with coloured plaster on the left side; this was removed in 1984. At that time the ivory was cleaned and closely examined, revealing extensive - but microscopic - traces of paint over a wide range of the surface, which allowed a reconstruction of the colour scheme. The background was originally blue, while the throne, footstool and cushion were gold, as was the book in Christ's left hand and much of his garments, his hair and crown. His lips were red, and his hands and feet pink.

The discovery of these remains reinforced still further the close stylistic similarity between the ivory and the illumination of Christ in Majesty in the Trinity Gospels in Cambridge, dating to about the same time. It thus illustrates well the intimate relationship between manuscript painters and ivory-carvers in Anglo-Saxon England. The Christ in Majesty and another walrus ivory relief of the Virgin and Child in the Museum (Mus. no. A.5-1935) share with the illuminations of the Trinity Gospels and other English manuscripts of the early 11th century the characteristic jagged draperies first seen in the famous Benedictional of St Aethelwold (now in the British Library), executed at Winchester in about 980.

Panel depicting Christ bearded and seated on a cushioned throne with footstool and holding a book in his left hand and a staff or sceptre in his right. Back of te plaque plain, with cross-hatched lines for adhesion on a separate background.

Winchester (or Canterbury, made)
Canterbury (possibly, made)

Historical significance: The style of the plaque is instantly recognisable as the so-called 'Winchester Style', characterised especially by the dense and calligraphically rendered draperies, with the hems and other edges of the garments consisting of sharp, zigzagging lines. This style dominated manuscript illumination and ivory carving at Winchester and Canterbury from the late 10th century through to the Norman Conquest in 1066. The splendid full-page miniature of Christ in Majesty in the Trinity Gospels (Trinity College, Cambridge, MS. B. 10.4, fol. 16b) represents a striking parallel, not only of the similar manner of depicting draperies, the virtually identical type of frontally posed Christ within a mandorla - with the same crown, diptych book, cushioned throne and footstool - but also because the colour scheme appears to match that which once adorned the ivory plaque.

It is probable that the plaque originally belonged to a book-cover. 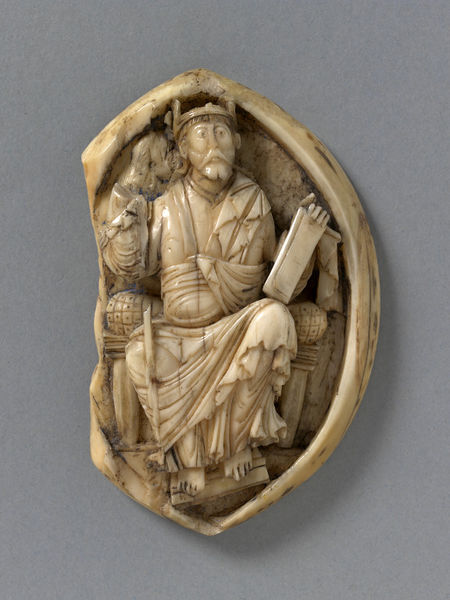