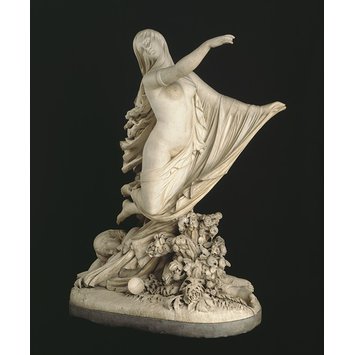 The Sleep of Sorrow and the Dream of Joy

Object Type
Raffaelle Monti (1818-1881) carved this allegorical figure group in 1861, and it was shown in the International Exhibition in London in 1862. A veiled figure of the Dream of Joy appears to hover above the sleeping figure of Sorrow. Although an apparently lyrical group, and sculpturally highly accomplished, it was primarily a topical comment on the contemporary political situation and resurgence of cultural unity in Italy, where a kingdom was proclaimed on 17 March 1861.

People
The son of a sculptor, Monti was trained in Milan, but came to London in 1846, and eventually settled there from 1848 until his death. He specialised in carving illusionistic veiled marble figures, ultimately derived from the work of the Venetian sculptor Antonio Corradini (1668-1752). He undertook a number of commissions for English patrons, including decorative sculpture for the grounds of the reconstructed Crystal Palace at Sydenham, London. Towards the end of his life, he became involved with the production of electrotypes for Elkington & Co., and in 1861 made the largest known electrotype monument, an equestrian statue of Charles William Stewart, 3rd Marquess of Londonderry (1778-1854), in the market-place in Durham.

Ownership & Use
Following its inclusion in the International Exhibition in London in 1862, this sculpture may have been bought by the chairman of the London Stereoscopic Company. Later it passed into the collection of the Croft family of Fanhams Hall, near Ware, Hertfordshire. In 1950 it was sold from this collection, where it was listed as having been in the Winter Garden. It was acquired either then or later by Mrs Sarah Hoda of Woodford Green, Essex, who lent it to the 1862 centenary exhibition held at the V&A in 1962. She sold it to the Museum in 1964.

A naked female figure lies sleeping, surrounded with roses, tulips, irises, daffodils and fuchsias, set in abundant foliage. A discarded cup lies on the ground. Above her a veiled, but otherwise naked female figure, wearing a bracelet on the right arm above the elbow, soars with outstretched arms into the air. Signed and dated.

Made in London by Raffaelle Monti (born in Iseo, Italy, 1818, died in London, 1881).
Shown at the International Exhibition London of 1862. Possibly purchased from the exhibition by Mr Nottage, Chairman of the London Stereoscopic Company. At a later date in the possession of the Croft family, Fanhams Hall, near Ware, Hertfordshire. In the collection of Anne, Lady Brocket of Fanhams Hall, and on her death sold by order of the Fanhams Estate Co. Ltd. and Major R.A. Page Croft. Bought by Dr Hoda from the Sotheby's sale of Fanhams Hall contents on the final day's sale, 5 October 1950 (sale began on 2 October), included in the contents of the Winter Garden as lot 1000, for £5. In a letter written by Mrs Hoda in 1962, she noted that the figure was originally bought for £1200. Bought by the Museum from Mrs. Sara S. Hoda, Woodford Green, for £300, in 1964.

Group, marble, The Sleep of Sorrow and the Dream of Joy, by Raffaelle Monti, England (London), 1861

British Galleries:
This was one of the three most admired sculptures in the 1862 exhibition held in London, which included the largest contemporary sculpture display of the century. Monti was an Italian sculptor who established his reputation in Britain. This work, an allegory of the resurgence of Italy as a nation in the mid-19th century, was reproduced in Parian ware in reduced size. [27/03/2003] 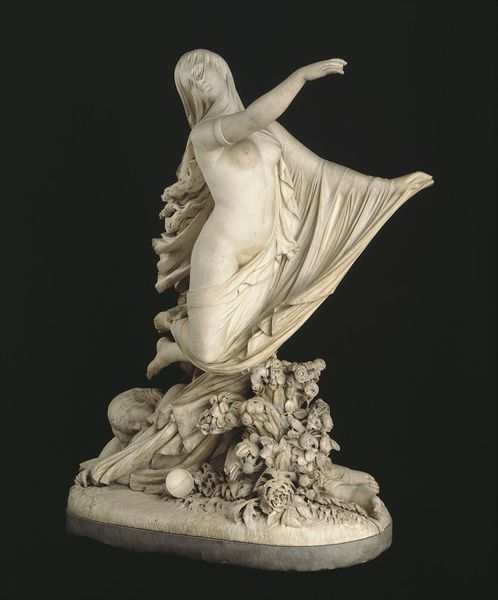