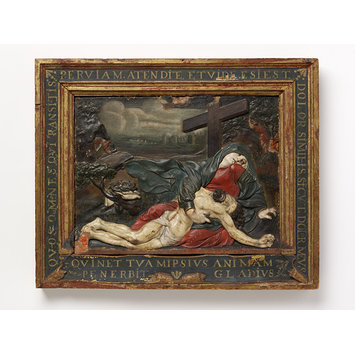 Juan de Juni executed several versions of this composition, all in terracotta (baked clay), and almost certainly all cast from moulds. The twisted and Mannerist-style forms are typical of this sculptor's work. Although all his known sculpture was made in Castile in Spain, Juan de Juni was probably French in origin.

The present version should be assigned to the workshop of Juan de Juni, and can be tentatively dated to the 1540s , approximately contemporary with the Salamanca relief. It was probably a devotional object, intended to be hung in a chapel or church, or in a private house. The inscription on the frame reinforces its devotional purpose.

Painted terracotta relief depicting the Lamentation in a painted and gilt wood frame.

QVI TRANSITIS PERVIAM . ATENDITE ET VIDE[T]E SI EST. DOLOR SIMILIS, SICVT. DOLOR MEVS QUINET TVAMIPIVS ANIMAM PENE[T]R[A]BIT GLADIVS
Is it nothing to you, all ye that pass by? Behold and see if there be any sorrow like unto my sorrow. And why will not the sword pierce your soul also?
The first part of the inscription up to (sorrow) is from the Book of Lamentations, 1, 12. It has not been possible to trace the source of the final sentence, which is inscribed along the bottom of the frame. The Latin appears to be corrupt and may be the result of a later repainting of the lettering. Infra-red photography did not reveal an alternative wording beneath the present surface.

Bought by John Charles Robinson from don jose Calcerrada in Madrid in 1863 for £4.

The mannerist style of the composition, with its elongated, contorted figures and nerviosidad is typical of the work of Juan de Juni. Comparable works by this artist include a pieta on the tomb of Guttiere de Castro in the Cathedral of Salamanca, almost certainly dating from around 1540 and a figure group of the Virgin with the dead Christ attributed to Juan de Juni in the Museo Mares , Barcelona . 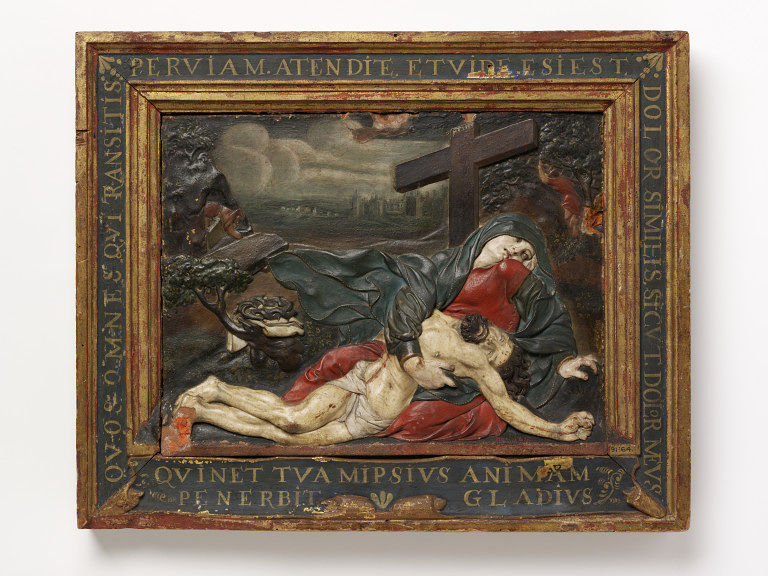