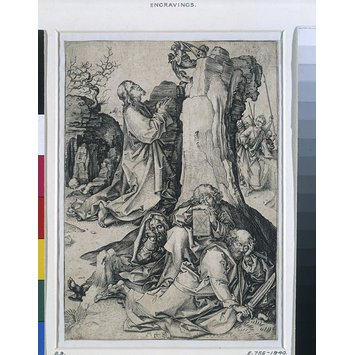 The Agony in the Garden

The German painter Martin Schongauer (ca. 1450-1491) was among the first northern European artists to take up engraving as a vehicle for his artistic vision. His work made an important contribution to the development of line engraving, and he was an early influence on Albrecht Dürer. He extended the vocabulary of strokes that engravers used, giving the medium new expressive potential for tone and modelling. The subject-matter of early engravings and woodcuts was frequently religious, and prints of that kind were often used for contemplative personal devotion.

Schongauer made a series of engravings of matching size detailing the events of Christ's Passion. This is the last plate of Schongauer's 'Passion' series

Christ in the middle distance kneels in prayer. He looks upwards to an angel who hovers above an outcropping rock. Three apostles, Peter, James and John are dozing in the foreground. At the right is Judas, clutching the bag of money that he has been paid to betray Christ. He steals into the scene, followed by soldiers. (from 'Martin Schongauer: The Complete Engravings' by Max Lehrs; pg 28)

M + S
The monogram of Martin Schongauer is at the bottom of the print in the centre. The monogram consists of Schongauer's initials and a goldsmith-like hallmark composed of a small cross plus the crescent from his family's coat of arms. This signature occurs in two forms: a few plates, apparently all done in the early 1470s, have an M with vertical sides; the majority, as in this example, have an M with slanting sides. (The Illustrated Bartsch, Vol.8 Part 1, pg. 1)

The series of the 'Passion of Christ' consisting of twelve sequential scenes is the largest set of engravings made by Martin Schongauer. It represents the continuation, on his part, of a traditional subject-cycle for fifteenth century engravers. Almost all of his predecessors had produced series illustrating the Passion of Christ. Schongauer's version is not only filled with agitation, drama and agony characteristic of German art in the fifteenth century, but he has also invested the scenes with a new and vital humanity. (from 'Martin Schongauer: The Complete Engravings' by Max Lehrs; pg 27)

As Master E.S. had done before him, and as Albrecht Durer would do later inspired by many of his compositions, Schongauer made a series of engravings of matching size detailing the events of Christ's Passion. Such cycles were as yet uncommon in the graphic arts, but were familiar from the illustrations for the canonical Hours of the Cross that appeared in illuminated manuscripts of the earlier fifteenth century. There are twelve plates in Schongauer's series which was widely copied across Europe, from France and the Netherlands to Poland and Hungary, in every graphic medium, as well as in painting and sculpture. (The Illustrated Bartsch; 8 Commentary, Part 1, pg.74).

Christ in the Garden on the Mount of Olives by Martin Schongauer; engraving; 1479-80 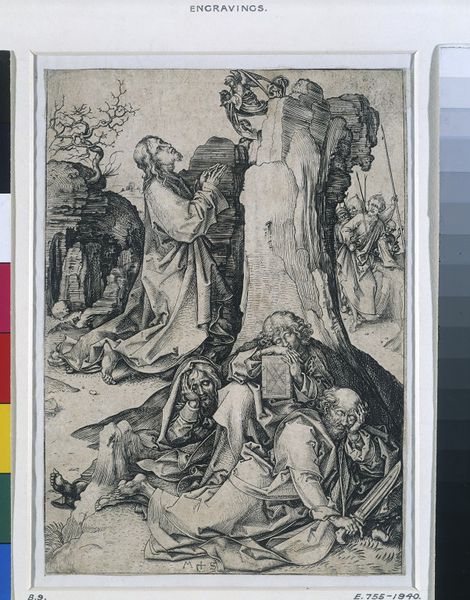