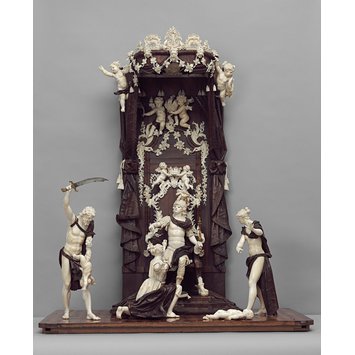 The Judgement of Solomon

The Judgement of Solomon was a subject that both illustrated the wisdom of a just ruler and allowed for a dramatic scene with male and female figures. According to the biblical story, two mothers went to Solomon to settle a dispute. Each claimed that of two babies - one alive and the other dead - the living baby belonged to her. To determine the truth, Solomon decreed that the living baby should be cut into two, and thus equally shared between the two women; at this the real mother revealed herself by renouncing her claim to the child in order that its life might be spared.

Here the soldier on the left is about to divide the living baby in two, while the true mother kneels before Solomon; the other mother points to her dead baby. Solomon is enthroned under a magnificent Baroque canopy, around which angels hover, perhaps as part of the decoration of the throne and canopy, or perhaps intended as real angels endorsing Solomon's wisdom. Another, even larger version of this composition is in the Museo Civico (the Palazzo Madama) in Turin; that piece is signed and dated 1741, giving an approximate date for the group here.

The sculptor Simon Troger Troger (1693 or 1694 – 1769) came originally from the Tyrol; he worked in Meran and Innsbruck, but probably also spent some time in Italy, and from 1726 was based in Munich. He specialised in figures and groups made of ivory and wood in combination, with inset glass eyes. The technical accomplishment of this imposing work epitomises the highly sophisticated level of ivory and woodcarving in Germany at this date.

King Solomon is seated on a large imposing throne adorned with putti and swags, the canopy of which is mounted with a relief of an allegorical figure of Justice. The figures are set onto a diaperpatterned wood floor by means of wood pegs. Solomon points towards a soldier, who is about to cut in two the baby held upside down in his left hand.

Carved ivory, walnut and coloured glass; and metal [for sword, buckle and sceptre].

The Judgement of Solomon
About 1741

This technically accomplished and imposing piece is characteristic of the sophisticated ivory and wood carving produced in South Germany at the time. The elaborate sculpture is based on an episode from the Old Testament in which King Solomon rules in a dispute between two women both claiming the same child. The king cleverly decrees that the child should be cut into two, at which point the real mother reveals herself by renouncing the child so that his life might be spared.

Simon Troger came originally from the Tyrol; he worked in Meran and Innsbruck, and probably spent some time in Italy. From 1726 onwards he was based in Munich. He specialised in figures and groups made of ivory and wood, with inset glass eyes. The technical accomplishment of this imposing work epitomises the highly sophisticated level of wood carving in Germany of this date. Another, even larger version of this composition is in the Museo Civico in Turin, that piece is signed and dated 1741, giving an approximate date for the group here.
[1993 - 2011] 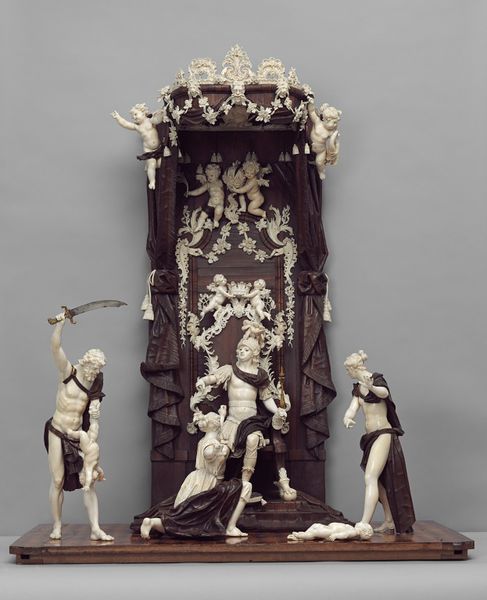