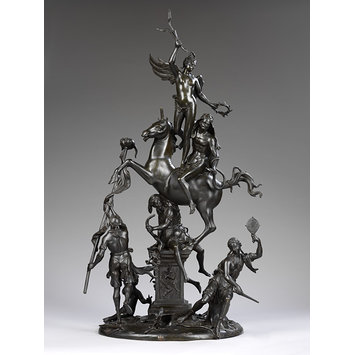 An Allegory of Triumph

This complex allegorical group shows a rearing unicorn supporting a winged female nude, probably representing Victory, who holds out a crown of laurel above the head of a seated male figure wearing a lion's skin (possibly Hercules/Valour) and holding a serpent in his left hand, and a female figure with a cornucopia (or horn of plenty) of jewels seated on an altar or plinth. A group is ranged around the altar: a female figure holding a mirror (probably Prudence), a male warrior with the head of a Turk or Tartar on a spike, another female holding ears of corn and a cornucopia (possibly Abundance) and a putto or child holding a ring, possibly a magnifying glass.

The complex iconography has been variously deciphered. Most recently clues have been taken from documents, dated about 1740, found in the archives of the collector and patron, Field Marshal Count Johann Matthias von der Schulenburg, which is has been suggested may even have been written by the artist, Bertos. Schulenburg's successful military background included leading the forces of the Venetian Republic to victory over the Turks in Corfu in 1715. He retired to Venice to become a collector of paintings and sculpture from 1724. The documents include a description of a lost pair of bronze sculptures simply as Victory and Peace.

Bertos was born and died in Dolo, a small town near Padua. He is also documented as working in Rome, Venice and Padua. This is one of a number of related groups of allegorical subjects, some signed, in the artist's immediately recognisable and idiosyncratic style. Although he also worked in marble, two examples of which can be seen in the Museum (Hylonome Attacked by the Lapiths, Mus. no. A.5-1943, and The Expulsion from Paradise, Mus. no. A.69-1953), his compositions were more suited to bronze, as the metal's tensile strength not allows greater experimentation with sculptural form. Moreover, his cleverly designed compositions to make best use of the technique, with the interconnecting limbs, drapery and weapons acting as sprues (some of which will have been removed) to carry the molten metal from figure to figure. His output was considerable, and examples of his work survive in collections throughout Europe and the United States.

The group is composed of several figures posing acrobatically on and around a rearing unicorn on a plinth. The sculpture stands on a circular base, and is surmounted by the lightly draped, winged figure of Victory with palm fronds in her left hand and a laurel wreath in her right, balancing on one leg on the unicorn. She holds a crown of laurel over the head of a male figure, wearing a lion skin and holding a serpent in his left hand, seated on the unicorn. Another female figure sits on the plinth, apparently supporting the unicorn; she is clothed and holds an inverted cornucopia spilling jewels. On the base, which is decorated with strewn pieces of armour, weaponry and ears of orn, are four more figures. One, a femail seated on a discarded piece of armour, is partially draped, holding aloft an oval mirror in her left hand, with a pointer (or pair of compasses) in her right and her foot on a serpent. A standing male warrior wears a laurel wreath and holds a spike topped with the severed head of an enemy. Next to the warrior is a seated putto with a magnifying glass or frame in one hand and a small sword or dagger in the other. A fourth figure is a semi-clad femal holding aloft ears of corn and a cornucopia, standing next to a sheath of corn. The plinth itself is embellished with reliefs of a crowned dancing figure holding a pair of compasses, an old man with a hand on his head surrounded by set squares and a figure wearing fruit on its head.

Group, bronze, 'An Allegory of Triumph', by Francesco Bertos, ca. 1700 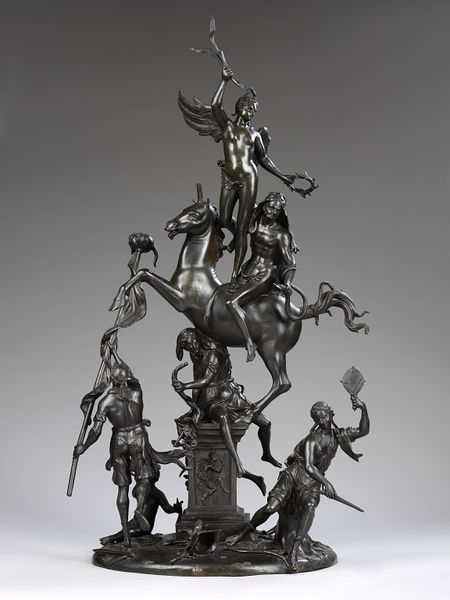