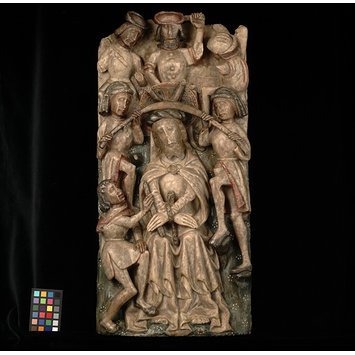 The Crowning with Thorns

This unusually tall panel shows the haloed Christ with a forked beard, seated with bound hands. A torturer places a reed in His left hand and others press down the down of thorns into his head using staves and rods.

This unusually tall panel shows the haloed Christ, with a forked beard, his head inclined to his right, seated in the middle of the panel, his hands bound in front. The Crown of Thorns is on his head, here characteristically represented by the torse. He wears a cloak fastened with a brooch. The kneeling figure on the left of the panel, wearing a short tunic and hood, his left hand resting on his knee puts a reed in Christ's left hand. Two figures wearing short gowns and hood turbans, the right-hand figure wearing a codpiece, stand on ledges higher up the panel and hold a bent rod over Christ's head, pressing down on the Crown of Thorns. Three other figures are at the top of the panel, wearing doublets and rolled-brim hats, the clothes of the right-hand soldier being slashed. Two of the figures appear to force down the Crown of Thorns with staves (arms and weapons broken). The central bearded figure is shown with this sleeves rolled up, his right hand raised, holding a staff with which to strike Christ.

A small part of the top of the panel, including the top corners, is missing. The reed in Christ's hand is broken off exposing the pyramidal-shaped piece of alabaster which supported it. Two holes have been drilled into the panel just above the shoulders of the central bearded figure at the top.

Green paint and the usual daisy pattern remain on the lower part of the panel. The section above is painted with white outlines to represent a wall. Traces of gilding remain above this. The torturers have the customary darkened faces. Their garments, lined with red, are edged with gold; their rolled hats have traces of black and red. The figures at the bottom of the panel have traces of grey and black paint, while the hood of the figure in the foreground bears traces of scarlet. Christ's halo is painted red and gilt with green (?), now darkened.

The back of the panel is marked with four horizontal scratches which suggest its possible position in an altarpiece. There are some ten holes drilled in the back, four plugged with lead. The bottom has been cut away.

4 horizontal lines.
On the back of the panel.; incising

Discovered in France. In the possession of P. Nelson from whom it was acquired by Dr W.L. Hildburgh. On loan from him since 1926. Given by Dr Hildburgh in 1946. 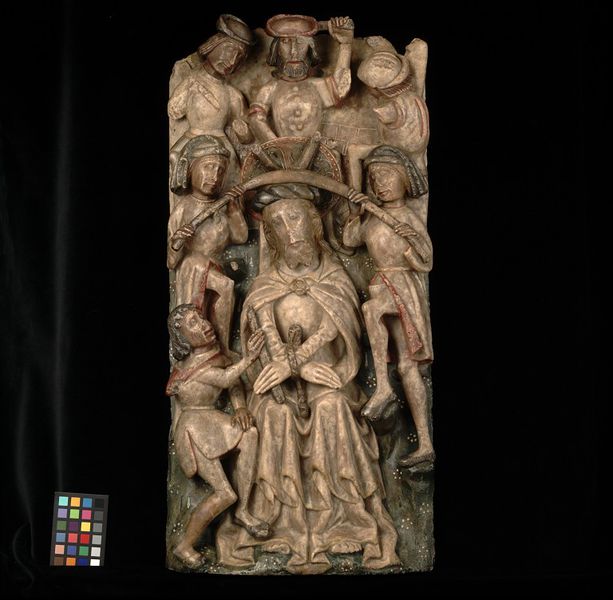