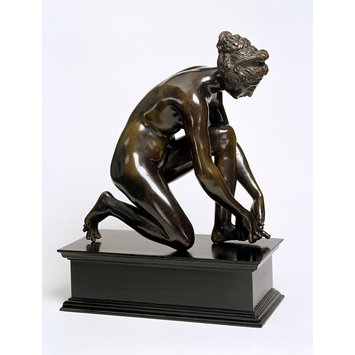 Venus removing a thorn from her foot

According to legend, the rose was originally a white flower, but in Venus' haste to help the dying Adonis, a thorn pierced her foot and her blood stained the petals red. This bronze shows the kneeling figure of the naked Venus removing the thorn from her foot. The pose is similar to that of the same subject engraved by Marco Dente (died 1527) after a fresco executed by Raphael's workshop in 1516 for the bathroom of Cardinal Bibbiena in Rome. The terracotta model for this figure, which was formerly painted to imitate bronze, is now in the Musée du Louvre in Paris. The Dente engraving was once in the collection of the artist François Girardon; it is mentioned in the inventory made after his death in 1710 and appears in an engraving of the Galerie de Girardon of the same date.

Ponce Jacqueau, who also worked in Rome, was one of the leading Parisian sculptors of his day. The figure of Venus is closely related in style and handling to the bronze figures of Prudence and Temperance that he made for the funerary monument of Henry II of France in the abbey church of Saint-Denis in Paris, in about 1565-1570. It is a unique cast, although smaller versions exist in other collections. A Mother and Child in the Wallace Collection in London is also attributed to the artist.

Bronze statuetted of Venus kneeling to remove a thorn from her foot.

Statuette, bronze, Venus removing a thorn from her foot, by Jacquiot Ponce, France, 1560-1570 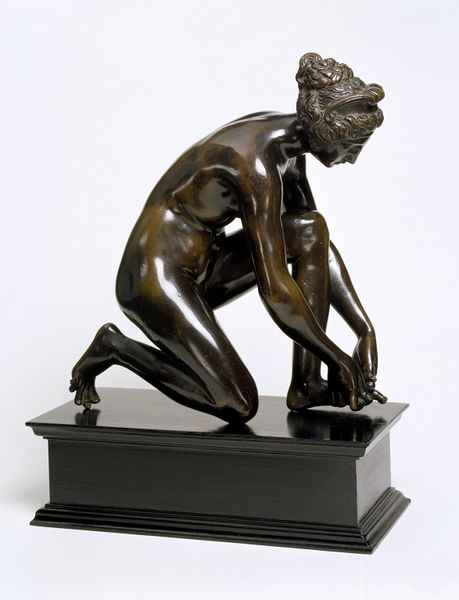