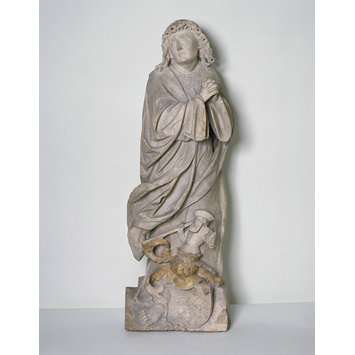 This figure of St John originally formed part of a Crucifixion group designed as a particular type of European church epitaph. It depicted the Crucifixion of Jesus Christ, flanked by his mother (the Virgin Mary) and St John the Evangelist. St John interceded on behalf of the deceased person, who was commemorated by name on an inscribed tablet, which is still in the church. Beneath the figure of St John is the coat of arms of the Lamparter von Greiffenstein family.

This type of epitaph was a speciality of Gregor Erhart of Augsburg. He was the teacher and uncle of Hans Daucher (died 1538), who made this figure.

St John stands on an integral rectangular sloped socle, with his head slightly inclined to his right, and his hands clasped. The mantle falls from his shoulders and then billows out. At the front of the socle and the lower part of the figure the coat of arms of the Lamparter of Greiffenstein is depicted. The arms show a quartered shield with rampant griffins against a rock in fields one and four, and in two and three two halberds crossed in saltire.The shield is surmounted by a crest, a bearded demi-man on a barred helm in his dexter hand a halberd and in his broken sinister hand was a crown surmounted by a griffin, now lost (see Siebmacher, VI,2, 1891-1911, p.177; pl. 95 for identification of the arms of the Lamparter family).The figure is carved from one piece of Solnhofen limestone. Only the helmet and the acanthus leaves of the coat of arms at the feet are polished. The back is flat and slightly hollowed out except for the head. At the back of the base is an irregular saw-cut recess made in order to fit the figure into a larger ensemble. There are traces of gilding on the coat of arms and acanthus leaves. The pupils of St John's eyes are tinted with dark-coloured paint. A section at the bottom right is broken off, including the left arm with the griffin of the demi-man in the crest, and part of the cloth. There are numerous chips on the figure. The edges of both sleeves are restored.

The history of this figure encapsulates the changing attitude to religious images dureng the Reformation perid. It was commissioned as part of a crucifixion group to be erected in a Nuremberg church in memory of Gregorius Lamparter von Greiffenstein, whose coat of arms are at the saint's feet. Because of fear of the spread of iconoclasm von Greiffenstein's son decided in 1524 not to place the monument in the church, although as it turned out the city of Nuremberg escaped the worst of the iconoclast destruction 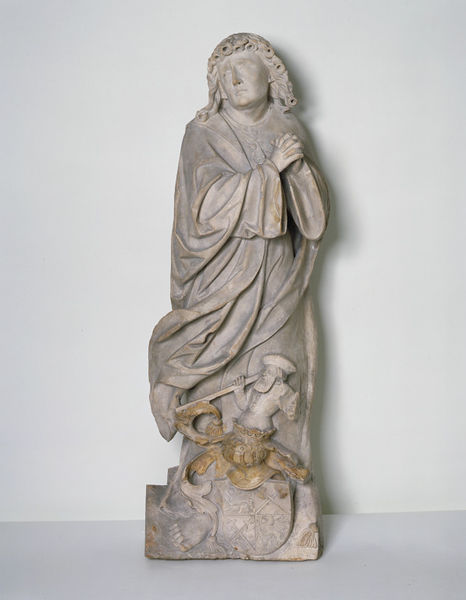