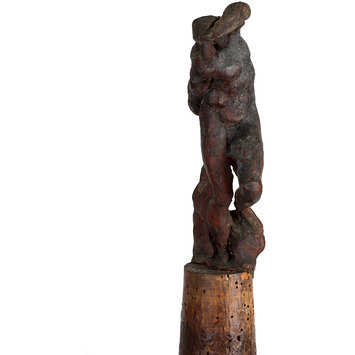 The small wax figure is a sketch model for the unfinished marble of the Young Slave in the Accademia in Florence, designed for the 1516 scheme for the tomb of Pope Julius II, who died in 1513. This scheme was the third of six produced for the problematic project, which, when it was commissioned in 1505, was planned as a large free-standing structure with more than 40 life-size or larger statues, and was intended for St Peter's in Rome. The existing, greatly reduced tomb was finally erected in San Pietro in Vincoli, Rome, in 1545. This model differs from the unfinished marble in several details, suggesting that the artist refined the design at a later stage.

Michelangelo made a large number of drawings and models in wax, clay and terracotta in connection with both his painting and his sculpture. He destroyed many of his preparatory works, but the growing interest in the creative process and his extraordinary celebrity led several of his contemporaries to collect his drawings and models. One such collector was the painter and biographer Giorgio Vasari, a great admirer and friend of the artist. In his Life of Michelangelo he described what he claimed to be the sculptor's working method: a small model of wax or other firm material was immersed in water and gradually raised to reveal more of the figure as the carving of the marble progressed.

Dark red wax on a metal armature rising from a cylindrical wood base. Standing, the upper part of the body is inclined to the right and the left arm is raised with the forearm covering the forehead and the hand touching the right shoulder. The right arm is held behind the back. The left knee raised and left foot standing on a rock, the right arm behind the back, the left over the head. The wax has at one time been varnished, and the surface is partly dicoloured.

This object was acquired in 1854 for the Museum of Ornamental Art at Marlborough House (later becoming the South Kensington Museum and later still the V&A) by its Keeper Sir John Charles Robinson. It was one of a group of 23 sixteenth-century Italian wax models acquired in Florence as part of the Gherardini Collection. Of the 16 ascribed to Michelangelo at that time, this is the only one still generally thought to be by the hand of the master. It was part of a collection "mainly of figures, groups etc. in wax and terracotta, presumed in every case to be original preparatory sketches or studies, by the great artists whose names are attached to them, and not after-copies from their completed works". The collection includes anatomical figures, or écorché of parts or whole figures.
The object was badly damaged by an accident involving a member of the public in 1924 the details of which are fully documented in Peta Evelyn's (now Motture) Burlington Magazine Shorter Notice of 1996. Despite the extent of the damage, when the thick wire armature was bent, and the rudimentary level of wax conservation at the time, the object was successfully restored.

Historical significance: This model is the only one in the V&A's collection still attributed to Michelangelo, and one of the few surviving by the master. It demonstrates the creative process of the artist working out ideas on a small scale to be transferred ultimately to a large-scale marble, in this instance surviving in the Accademia in Florence. X-rays reveal the original central support around which the wax was modelled, together with the repair pins that were inserted following damage sustained by the wax in 1924. While Michelangelo stated that he could envisage the sculpture within the block of marble - that he would usually have chosen himself at the quarry - the survival of this and the few other models attributed to the master demonstrates his working practice, and emphasises how a composition was transformed during the design process.
Similarly, the wax and terracotta models by Giambologna in this collection demonstrate clearly how ideas were developed in three demonstrations from the small to the large scale.

The object is generally accepted as an autograph work by Michelangelo, created as a preparatory sketch model for his unfinished Young Slave in marble now in the Accademia in Florence (for a detailed compositional comparison see Pope-Hennessy). The marble Young Slave was designed as one of around 40 over-life-size sculptures to decorate the tomb of Pope Julius II, originally commissioned in 1505. The tomb was intended for St Peter's, but underwent several schemes before eventually being erected in a much reduced form in S. Pietro in Vincoli. The malleable medium of wax was ideal for working out initial ideas for sculpture. The artist and biographer, Giorgio Vasari described how the wax was prepared: 'to render it softer a little animal fat and turpentine and black pitch are put into the wax, and of these ingredients it is the fat that makes it more supple; the turpentine adds tenacity, and the pitch gives it the black colour and a certain consistency' (Vasari on Technique, p.148). Red was preferred by many artists, as seen here, and this was achieved by adding red earth, vermilion or red lead. Like other artists, Michelangelo must have made a vast number of such waxes, the first of which in the design process would have consisted of just a hastily modelled work, like the example surviving in the British Museum. This one was made when his ideas about the posture were already quite well formulated. Michelangelo destroyed many of his drawings and models, but his fame meant that his contemporaries began to save and collect his sketches, amongst others, as they captured the artist's creative process. According to Vasari, Michelanglo used his wax sketch models in a most unusual way, immersing them in water, and raised them bit by bit as the carving of the marble progressed.

Model of a slave, dark red wax on a metal armature rising from a cylindrical wood base 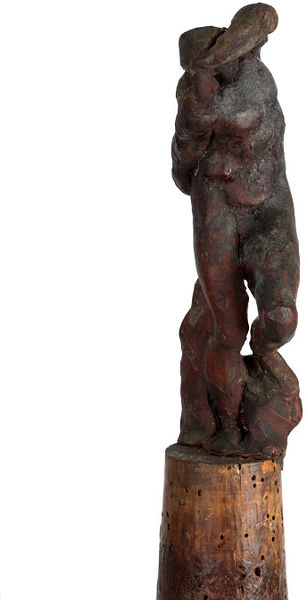