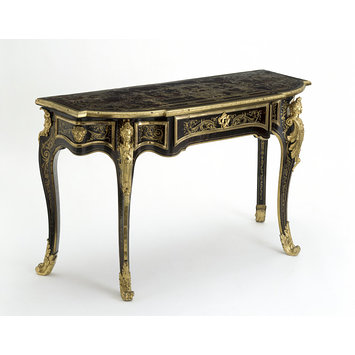 This table is an elaborate example of boulle marquetry - thin sheets of brass and turtleshell veneer on an oak frame. Such marquetry took its name from André-Charles Boulle, who was cabinet-maker to Louis XIV in Paris in the late-17th century.

Until recently, the top of this table was assumed to have been made in Boulle's workshop in the early-18th century, then adapted to a new frame by the cabinet-maker Adrien Dubois in the 1760s. This theory is currently under reconsideration, as the quality of the engraving on the brass inlay is much denser and more detailed than that seen on Boulle's other early 18th-century marquetry. The difference in the quality of the engraving has lead to a theory that this table may have been made entirely in the 1760s, as a new model that referenced and updated an earlier Boulle design.

The table's uncertain history highlights the ongoing popularity of boulle marquetry throughout the 18th- and 19th-centuries. Boulle pieces were continually re-used, re-sold, adapted and imitated by contemporary craftsmen and by merciers.

Table of oak, veneered with ebony and walnut and with marquetry of engraved brass on turtleshell, gilt brass mounts, brass and steel lock, steel key.

The table is built of oak with a walnut drawer. A shaped top with a moulded edge sits on top of a shaped frieze, above four legs. The shaped frieze is set with a single drawer at its centre, this drawer is fitted with a steel and brass lock.

The table base is veneered with turtleshell, aside from the inside back surfaces of the back legs, which are veneered with walnut. The legs' turtleshell veneers are inlaid with brass scrolls and tendrils. A strip of brass runs up from the foot of each leg, at both front and back, to outline the table base. At the front of the front two legs, this strip meets a gilt brass female term. At the front of the back two legs, this strip meets a shaped reserve, into which is mounted a gilt brass satyr mask.

Above the legs, the table's frieze is set with five panels of boulle marquetry, each of these outlined by a brass moulding. These panels demarcate the borders of each of the frieze's deep curves. The central panel is fitted onto the drawer front. The two side panels are mounted at their centre with a gilt brass mask.

The table's boulle marquetry top is inlaid with an image of a triumphal car. The image of the car derives from a 1550s engraving by Cornelius Bos (d. 1556). This design provides evidence that the Boulle workshop continued to incorporate lively designs of earlier periods into its work. In this case, Bos' design is dressed out with more modern decorative details derived from designs by Jean Bérain I (1640-1711).

Veneers of turtleshell and engraved brass, with walnut, on an oak carcase with walnut drawer, with gilt-brass mounts

From the mid-century, members of the cabinet-makers' guild in France were required to stamp with their name pieces which they made or adapted, and this table is stamped with the mark of a cabinet-maker called Adrien Dubois (Master 1741). Until recently, it has been believed that the table was adapted by Dubois from an original six-legged design, and that it combines a 1760s frame with an early 18th-century top.

The design of the table top is after an engraving by Cornelius Bos (d.1556). It is one of a pair of table top designs from Bos engravings, both of which were used in Boulle's workshops in the early 18th-century. This design shows a triumphal car, the other a circus wagon. A pair of tables using both designs are now in the Wallace Collection (F424 and F425).

The two Wallace Collection tables are of a six-legged form that can be attributed to Boulle or to an employee in his workshop (A. Pradère, p. 100, see References). A design engraving of the six-legged table was published by the Parisian print dealer Mariette in 1724, as part of a repertoire of designs for clocks and furniture after models by Boulle. In his version of the table frame, Dubois adapted this early 18th-century design to the sinuous Rococo lines of his own period, eliminating its straight legs and stretcher and accentuating the curve on each side of the frieze.

The fact that there are no marks on the frame to indicate that two legs have been removed proves that the frame was newly made by Dubois. While it had, until recently, been believed that this mid-18th century frame was made to receive a top of earlier and much-admired marquetry, recent examination of the quality of engraving on the table top suggests that the entire table may in fact date from the 1760s. The quality of engraving on the table top's brass motifs is unusually dense and detailed when compared to that on the Wallace Collection tables. This difference in the function of the engraved detail has lead to a reconsideration of the date of the marquetry, suggesting that the entire table may have been made in Dubois' workshops.

The tables' mounts are of models known to have been used on tables of the early 18th-century form, and the quality of their casting, chasing and gilding suggests that they were made for an early 18th-century table. The key escutcheon may have been added by Dubois, and the sabots (foot monts) on the back feet may be a yet later replacement.

Though the pursuit of the newest style in furnishings was important to the courtiers and other wealthy inhabitants of Paris in the 18th century, the work of André-Charles Boulle (1642-1732), who was cabinet-maker to Louis XIV and his successors from 1672, never went out of fashion. His sumptuous marquetry of turtleshell and engraved brass remained desirable to connoisseurs throughout the 18th and 19th centuries and was distinguished in sale catalogues of famous collections by the mention of his name. Boulle pieces were re-sold, adapted and re-used, and the boulle technique continued to be used throughout the 18th century.

Tables such as this were often supplied as pairs, with a second table executed in contre partie to the same design or with a top of a different design.

Pradere, Alexandre, French Furniture Makers. The Art of the Ébéniste from Louis XIV to the Revolution. Paris, 1989, p. 100.

Console table
1750–60, top possibly earlier
It is possible that the top of this table
was made in the workshop of André-
Charles Boulle and combined 50 years
later with a new stand. But it may in
fact have been made in the 1750s to
an earlier design. Either way, the table
shows the continued popularity of
boulle marquetry in the 18th century.
France (Paris)
Made or altered by
Adrien Dubois
Oak veneered with
walnut; marquetry in
turtle shell and brass;
gilded copper alloy
mounts
Bequeathed by John Jones
Museum no. 1021-1882 [2015]
[Label text by Peter Thornton]
CONSOLE -TABLE
French (Paris); about 1760 (/)
Styamped A. Dubois and J.M.E.

The top dates from the first quarter of the 18th-century (an engraved template for a marquetry pattern very similar to this is in the Museum of Fine Arts, Boston, Mass.) and is of a type normally found on a certain form of table with six legs. Four of the legs have been retained and the marquetry adapted or extended to fit a more modern shape, while new brass mouldings were fitted as trimming.

This work was presumably carried out by Adrien Dubois, a member of a family of Parisian cabinet-makers that specialised in the restoration and adaptation of "boulle-work". He became a master in 1741 and an officer of his Guild in 1749. The Guild's stamp of approval (J.M.E.) was not apparently used until the 1750s.

The top dates from the first quarter of the 18th century (an engraved template for this marquetry pattern is in the Museum of Fine Arts, Boston, Mass.) and is of a type normally found on a certain form of table with six legs. Four of the legs have been retained and the marquetry adapted or extended to fit a more modern shape, while new brass mouldings were fitted as trimming.

This work was presumably carried out by Adrian Dubois, a member of a family of Parisian cabinet-makers famed for their restorations and adaptations of "boulle-work". He became a master in 1741 and an officer of his Guild in 1749. The Guild's stamp of approval (J.M.E.) was not apparently used until the 1750's.

Jones Collection
Museum No. 1021-1882 [1971]
CONSOLE TABLE
FRENCH (Paris); probably about 1760, reusing a marquetry panel of 1700-25
Stamped: A. DUBOIS and JME
Veneered with boulle marquetry, of tortoiseshell and engraved brass, on a carcase of oak; gilt-bronze mounts

The top of this table dates from about 1700-25. Its design is very close to the engraved pattern for marquetry illustrated in the photograph. The top was re-used more than thirty years later, with fashionable legs of curving, cabriole form. The marquetry was adapted and extended and a new brass edging fitted. The mark on the table is that of Adrian Dubois, who became a master cabinet-maker in 1741. The Dubois family specialised in the restoration and adaptation of boulle marquetry. 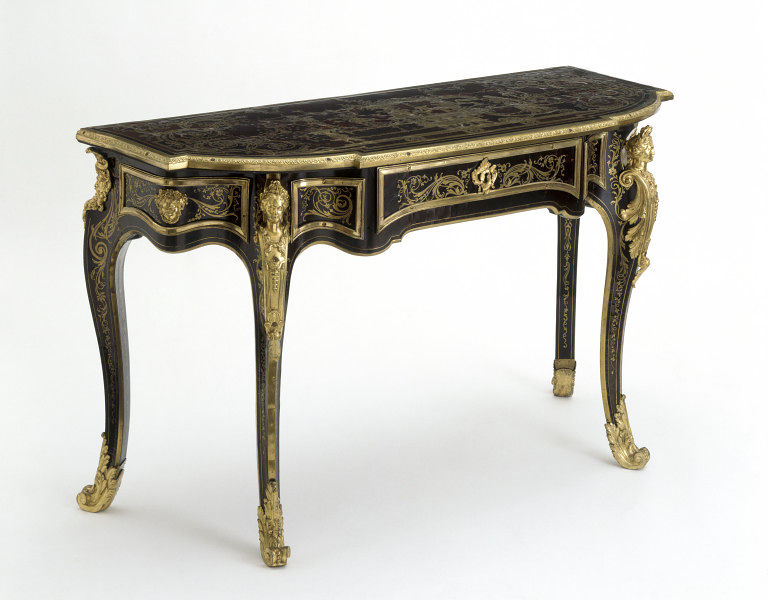