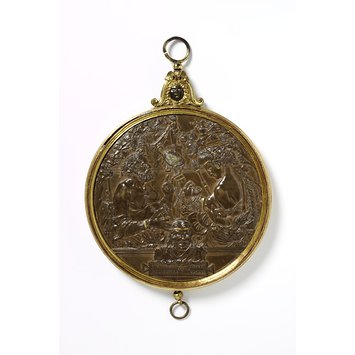 Profile figures of a satyr and bacchante face each other beneath a term representing the ancient fertility god, Priapus. A Latin inscription reads: NATVRA FOVET QUAE NECESSITAS VRGET ('Nature encourages what necessity demands'). Both the wording and the figures suggest that the relief is an allegory of reproduction.

It was once thought that the great Florentine sculptor Donatello (1386-1466) made the mirror. The Museum purchased it in 1863 from the Martelli family, with whom Donatello was associated. But the style of the piece differs from Donatello's other bronze reliefs. The exquisite detailing suggests that an accomplished goldsmith made it. A circular cutting from a document was discovered inside the mirror in the late 1950s. It was written largely in cipher. The contents of the text, together with a watermark, indicate that it came from the secret diplomatic archive in Milan. This suggests that the mirror was manufactured in Milan in the late 1400s. It also supports the view that Caradosso, a goldsmith and maker of plaquettes, made it. He was active in the city between 1475 and 1505.

On the back, in relief, is an allegorical representation of fruitfulness, in which are half length figures of a nymph and satyr.

Bronze, inlaid with gold and silver

The mirror is mentioned as in the Palazzo Martelli in 1824. See Pope-Hennessy p.326.
Purchased in Florence (Marchese Martelli, through W.B. Spence, £650.

This mirror was probably a marriage gift, and its intricate decoratin suggests that it may have been made by a master goldsmith. The satyr holding a cup (left) and the bacchante pressing milk from her breast (right) represent an allegory of reproduction. The mirror itself takes the form of a polished steel plate on the back. 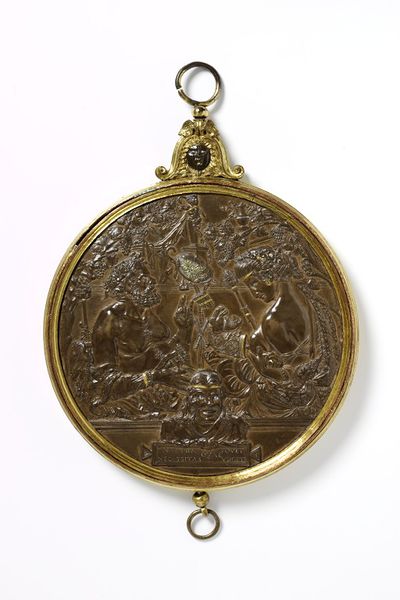