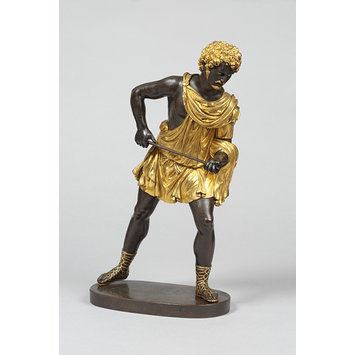 The statuette represents the mythical character Meleager, the heir to the throne of Calydon, a city in Greece. His father had offended the goddess Artemis, who sent a great boar to attack his homeland. Here Meleager is poised to kill the boar. The design is based on a classical marble statue. At one time this marble was in the Belvedere in Rome, but we know that it was in the Uffizi in Florence by 1638. There it was popularly known as the Contadino or Villano (peasant). A fire in 1762 destroyed it.

This bronze statuette is probably the ‘figure of metal called the little peasant’ listed in an inventory of 1496. This was made after the death of Gianfrancesco Gonzaga of Bozzolo, the third son of Marchese Ludovico Gonzaga of Mantua. It is one of a number of bronze figures based on classical models that appear in the same list.

Antico was one of the finest masters of bronze sculpture of the late 1400s and early 1500s. He trained as a goldsmith and was court artist to three generations of the Gonzaga dynasty. He primarily worked in Mantua, but was also at Gianfrancesco’s castle at Bozzolo in the late 1480s. The Gonzaga court cultivated humanist ideals and attracted renowned artists to Mantua. Notable among them was the painter Andrea Mantegna, who maintained a particularly high status. Mantegna’s style and interest in ancient Roman art influenced many other artists, and he provided designs for them to follow. Antico was no doubt among them.

It was in this artistic atmosphere that Antico developed a sophisticated technique of reproducing small-scale bronzes. This involved taking moulds from his original model and casting the statuettes from them. The moulds could be reused. Antico was therefore able to provide copies of several of his bronzes about 20 years after he had made the originals. He did this for Isabella d’Este, who was a great patron of the arts. This is, however, the only known version of the Meleager. The figure’s hair, moustache, beard, teeth, tunic and sandals are inlaid with silver. This rich decorative treatment is characteristic of Antico’s work and reflects the taste of his Gonzaga patrons. It contrasts with the rougher but more vibrant handling of bronzes produced at the time in the humanist circle at Padua.

Meleager is shown poised ready to kill the great boar sent by the goddess Artemis to attack his homeland. Based on an antique marble statue, this bronze is probably the 'figure of metal called the little peasant' referred to in a Gonzaga inventory of 1496. Antico's highly classicising but richly decorated bronzes appealed to his Gonzaga patrons at Mantua.

Museum no. A.27-1960
Purchased from the Horn and Bryan bequests with the assistance of a contribution from The Art Fund [2008] 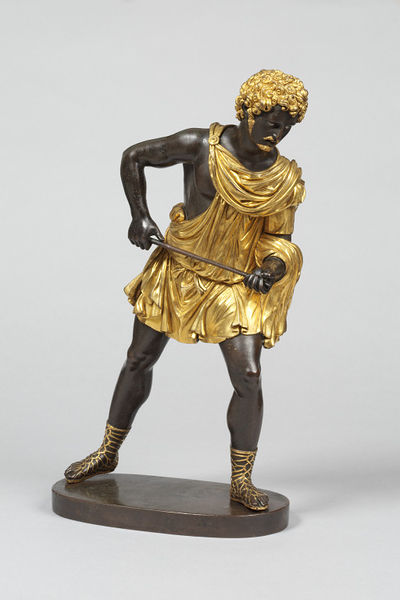