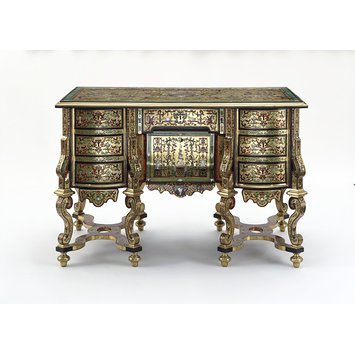 This type of writing desk, with eight legs and a bank of drawers either side of a knee-hole, is known today as a bureau Mazarin. This is a 19th-century term. These desks have no connection with the era of Louis XIV of France's chief minister, Cardinal Mazarin (1602-1661), for they came into fashion in the 1670s. Many surviving bureaux Mazarins are sumptuous examples of the fine craftsmanship of 17th-century French ébénistes (cabinet-makers). A number of them are listed in the inventories that record the contents of the palace of Versailles near Paris and other royal residences.

A writing desk or bureau Mazarin, in marquetry of brass, copper, tin or pewter, ebony, ivory, mother-of pearl and clear turtle shell and horn with paper backing, with a central drawer and door, flanked on either side by three drawers, supported respectively by four scroll legs terminating in a stretcher.

Marquetry of brass, ebony, ivory, mother-of-pearl, copper, tin or pewter and clear turtle shell and horn with painted paper backing, on a softwood and walnut carcase

This form of desk, which became fashionable in France at the end of the seventeenth century, is often called a 'bureau Mazarin'. The term clearly clearly attempts to link the form with the statesman Cardinal Mazarin (1602-1661), but it was not used before the 19th-century (N. de Reyniès, pp. 378-379, see References). Although such tables are generally thought to have been used as desks, several late seventeenth century engravings show them in use as dressing tables (P. Thornton, p. 231, n.25, see References).

The earliest known table of this form was made about 1669 and is first documented in the Journal du Garde-Meuble (a register of furniture supplied to the French royal households) in 1676. That table is attributed to the royal cabinet-maker, Pierre Gole (N. de Reyniès, p. 378, see References). Another desk of this form is in the Royal Collection at Windsor and bears the arms of the duchesse de Retz (most likely Paul-Françoise Marguerite de Gondi (1655-1716).

This desk forms part of a small group of similar tables, linked closely by their form and decoration, and all of the highest sophistication of design. One of these is known to have been made for the Elector of Bavaria, Maximilian II Emanuel (1662-1726) who spent years of exile in France. As with the V&A piece and that made for the Elector of Bavaria, highly coloured marquetry on a brass ground was employed.

There are many parallels within this group in the design and disposition of the figures, flowers and fantastic birds. Perhaps the most striking is the repetition on the recessed centre panel of each desk of the motif of an obelisk wrapped in a garland of ivy. Other details of the marquetry are repeated on all of these pieces and on other types of furniture, suggesting that they form the output of a single workshop (G. Himmelheber, p. 250-263, see References).

This piece was possibly used as a dressing table with a mirror hung above it. The central part of the table top alludes to its use, showing Venus looking at herself in a mirror with Cupid in attendance. The highly coloured inlaid design is characteristic of the style of Jean Bérain. It incorporates playful figures and exotic birds and animals, linked by delicate bands of scrolling foliage.

Given by Mrs Julia Anne Bonner [2015]
DRESSING TABLE
French (Paris); about 1680
Pine veneered with marquetry of brass, ebony, ivory and "clear" tortoiseshell. The green areas and other coloured details are painted on paper beneath the transparent tortoiseshell. The brass and mother-of pearl areas are engraved (now much worn). The drawers are of walnut.
A related writing-desk in the Royal Collection bears the arms of de Retz and Lesdiguières. A marriage took place between two members of these families in 1675.
Formerly the property of Charles Spencer Ricketts.
Bequeathed by Mrs J.A. Bonner.
Mus. No. 372-1901 [1980]

Attribution note: Several of the coloured areas of the marquetry, including the elaborate baskets of flowers and the areas coloured green, were made by gluing painted paper to the back of the clear horn. This allowed the cabinet-maker to bring into his piece some of the brightest colours, which were otherwise only available in pietre dure. Unlike furniture veneered with wood, which inevitably fades and discolours over the years, this desk retains much of its original brilliant colouring. 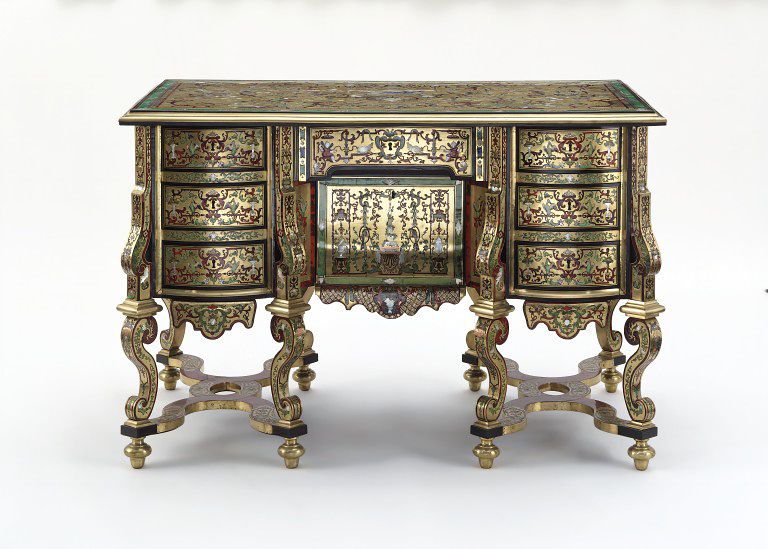