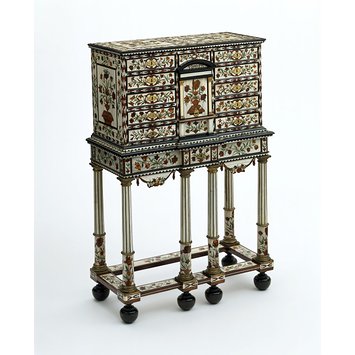 This small cabinet is an exceptionally delicate version of the cabinets that became the pre-eminent type of luxury furniture throughout Europe in the seventeenth century.

Larger versions, with marquetry of tropical woods, survive in some numbers but only two of these miniature versions are known. The idea of using ivory as a veneer had developed in Augsburg in the 1620s but Pierre Gole, the royal cabinet-maker in Paris, was unique in using it as a ground for marquetry in woods with vivid colours.

Gole almost certainly made this cabinet for the household of the duc d Orléans, brother of King Louis XIV of France. In 1661 the duke married Henriette Anne, fifth daughter of King Charles I of England. The couple set up their household in the Palais Royal, Paris. When the duchess died in 1770 an inventory of the household was taken under the supervision of Gole. It listed a cabinet of identical form and size in the Cabinet blanc in their apartments.

Cabinet-on-stand of small scale, veneered with floral marquetry in ivory, tortoiseshell and bone, with a variety of woods, on a carcase of pine, oak, walnut, with other woods. The stand shows a slight breakfront in the centre and is composed of a shallow frieze section with a single long drawer, the front expressed as three drawer front, supported on on six tapering columnar legs joined at the base by continuous flat stretchers, above turned feet. There are two legs at the back corners and four on the front edge, the central two set more closely than the outer ones, beneath the narrow central section of the cabinet. The upper cabinet section is composed of two banks of drawers, each expressed as five drawer-fronts, flanking a central section with a doorcase. In fact, the left hand bank of drawers consists of two drawers above a double-height drawer with the front decorated as two drawer fronts, and the lowest 'drawer' forms the left-hand half of a longer drawer which extends beneath the central door. The right-hand bank of five drawers is constructed as it appears to the viewer. There is a single, small drawer above the central door. The door conceals three further drawers which are decorated, as is the inside of the door, with marquetry in woods that retain their original strong colouring, unfaded by exposure to the light. Because the piece is relatively small in scale, the top of the cabinet, being easily visible, is veneered and inlaid with panels of marquetry following the form of those on the sides. In contrast, the backs of the legs, which are not normally visible, are veneered in walnut in place of ivory.

The marquetry is of formal motifs replicating mouldings and framing elements on the cabinet, the main panels veneered with sprays or bouquets of flowers. Those on the sides and the central panel are in urns set upon architectural plinths, the large bouquets on the panels of the top are simply tied with ribbons. The outlines of the two apron panels (culs de lampe) beneath the frieze section on either side follow the form of the swags of drapery and flowers depicted in the wood marquetry edging the panels.

The marquetry shows evidence of frequent repair but appears to be substantially original. The carcase appears to have been substantially re-built, probably to consolidate its structure after insect damag.

Veneered in ivory and tortoiseshell, with marquetry of various woods and green-stained bone, ebony mouldings and brass mounts, on a pine carcase, with walnut drawers

The cabinet is thought to have been made for the apartments in the Palais Royal, Paris, occupied by the duc and duchesse d'Orléans after their marriage in 1661. The duc was the brother of Louis XIV, the duchesse was Henriette Anne (1644-70), the daughter of Charles I of England. The inventory drawn up after the death of the duchesse in 1670 includes a description of a cabinet in the small room known as the Cabinet blanc (the White Cabinet) which was identical in size and decoration to this piece (TH. H. Lunsingh Scheurleer, 1980, pp.380-394, see References). The royal cabinet-maker Pierre Gole acted as the expert advisor in the making of that inventory, which may suggest further that he had had earlier commissions in the household. The form and richness of the cabinet are consistent with the work of Gole, to whom it has therefore been attributed. Its whereabouts after the date of the inventory are unknown until it was acquired by Didier Aaron, Paris, from whom it was bought by the Museum in 1983.

Historical significance: The cabinet represents a rare example of using ivory as a ground for marquetry of flowers, creating a strong contrast of colour. The expense of exotic materials frequently restricted their use to small details of decoration, but this cabinet is unique in French cabinet-making in its most lavish use of ivory. The inventory of 1653 of the possessions of Cardinal Mazarin in Paris included a cabinet veneered with tortoise-shell and with ivory (TH. H. Lunsingh Scheurleer, pp.380-394, see References). The V&A cabinet is much rarer in using ivory as a ground for marquetry of flowers in wood. Ivory had first been used for the ground of marquetry of table cabinets in Augsburg as early as the 1620s, and in 1646 the Augsburg cabinet-maker Melchior Baumgartner combined ivory with hardstones on a cabinet (Scheurleer, 1984, p. 334, see references). Gole was the first cabinet-maker to use ivory in this fashion in France.

The strongly contrasted marquetry on this cabinet follows the aesthetic of work in pietre dure or hardstones and would have been much more apparent before oxidisation and fading took its toll on the original colours, which were almost certainly far more naturalistic than they appear now. The panels of marquetry are highly stylized and this may also be a conscious device to imitate pietre dure.

The search for pure, white grounds, was perhaps associated with the growing contemporary enthusiasm for porcelain, which was avidly collected at the French court at the time. White grounds were also found, slightly later, in japanned cabinets with a white ground made in Berlin in the first years of the eighteenth century by the cabinet-maker Gerard Dagly and by unidentified makers of japanned furniture at the same period in London.

Gole was Dutch-born and had come to Paris in 1643. By 1656, he had been described as cabinet-maker to the King (A. Pradère, pp. 45-51, see References). In 1662-4, Gole supplied a suite of furniture in ivory and floral marquetry - a cabinet, tables and guèridons (candlestands) - for Versailles. A small table, now in the J. Paul Getty Museum, Los Angeles, veneered in ivory and blue-stained horn, is almost certainly one supplied by him in about 1674 for the small pavilion at Versailles known at the Trianon de Porcelaine, which was decorated largely in blue and white (G. Wilson, pp. 61-66, see References). A larger cabinet on stand with ivory marquetry in the collections of the Dallas Museum of Art (Wendy and Emery Reves Collection) is attributed to Gole (V.J. Vinson, pp. 6-10, see References). In that case, the decoration combines ivory with areas inlaid with small pieces of mother-of-pearl, in imitation of a Japanese lacquer technique of the early seventeenth century. The V&A piece is one of only two French cabinets of this period known, which were made on this miniature scale. The other is in the collections of the Rijksmuseum, Amsterdam. On that piece, considered by some to pre-date this piece by a few years, the marquetry is on a ground of tortoiseshell, with minor use of ivory.

This cabinet was almost certainly made for Louis XIV's brother, the Duc d'Orléans. He set up house in the Palais Royal in Paris after his marriage in 1661. This cabinet was one of six in the cabinet blanc, or white room, at the palace. This room was covered in embroidered white watered silk with gold and silver braid. The use of ivory is typical if the cabinet-maker Pierre Gole's work for the French royal family.

The cabinet is small and low, and was therefore also decorated with marquetry on the top surface. To save the expensive ivory, the backs of the legs are veneered with walnut.
Its unusual dimensions and chief characteristics coincide with those given in a description of a cabinet that belonged to Henriette Anne, a daughter of Charles I of England who married the Duke of Orléans in 1661 and died in 1670. It is listed in the inventory of her closet in her apartment at the Palais Royal taken on her death.
The inventory was certified by Pierre Gole, one of the leading Parisian cabinet makers of the time, and it is probable that he had also made this cabinet during the previous decade. The ivory gound would no doubt have been especially appropriate in the closet which was called the Cabinet Blanc - presumably on account of its decoration in which white must have predominated.
Golle made several ivory cabinets for Louis XIV early in the 1660s at which time floral marquetry was still a novel form of decoration. The rather stiff floral elements may reflect a primitive stage in the art but it has also been suggested that the maker was here imitating contemporary Italian work in pietre dure. [1980's]

Very few pieces of furniture can be attributed to Gole with absolute confidence. Several pieces showing strong design similarities to this cabinet are attributed to him and archival records exist which demonstrate that he was particularly innovative in his use of luxury materials such as ivory, tortoiseshell and mother-of-pearl together with tropical wood marquetry, all of which occur frequently in the group of furniture attributed to him, as do facetted, striped legs similar to the ones on this cabinet and rich floral marquetry. Unfortunately, we know very little of the history of most of these pieces, so it is impossible to connect them to particular items mentioned in the considerable archival documentation that exists on Gole's work.

Attribution note: The variety of materials used in the production of the cabinet were identified by conservators during examination for the French Furniture Catalogue to be published in 2011. The use of expensive ivory is carefully calculated: the back of the legs, which are not visible easily, are veneered with facets of walnut in place of ivory. 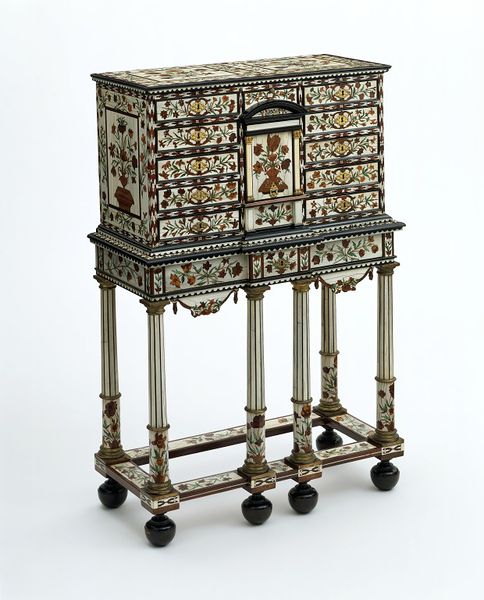