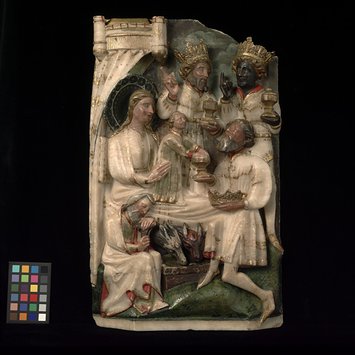 Adoration of the Magi

The familiar scene of the Adoration of the Magi is depicted here. The panel would have formed part of an altarpiece - a panel showing the Coronation of the Virgin also in the V&A (A.35-1946) appears to have come from the same object. This combination of subjects would indicate that the altarpiece was devoted to the Joys of the Virgin. This was a popular subject, seen also in the Swansea Altarpiece (A.89-1919), which contains an Adoration of the Magi which is not dissimilar to this example, though the composition is flipped over into a mirror image.

The three kings are traditionally depicted. The custom of showing one of the kings as black spread throughout Europe from Bohemia from the fourteenth century onwards, in representations in various media from woodcuts and paintings to wood carvings and manuscript illustrations. The Adoration of the Magi was also a popular subject in alabaster - over 100 examples survive.

The panel was bought in Spain, and donated to the museum. Many English alabaster panels appeared in Spain during the nineteenth and twentieth centuries, and it is likely that they were either exported to Spanish patrons immediately they were made, or sold on to Catholic churches in Spain after the Reformation in England in the mid sixteenth century.

The upper right side of the panel has a plain border. The haloed Virgin, wearing a tight-fitting, belted gown and a cloak is sitting up on a bed on the left of the panel, under a canopy, with a cushion behind her. She looks down at the gowned figure of the Christ Child whom she holds standing on her lap. He places both hands on top of a chalice-like cup held in the right hand of the bearded king, Gaspar, who wears a tunic and kneels on his left knee at the Virgin's feet, holding his crown in his left hand. The beardless king, Balthasar, wearing a large crown and a low-belted doublet, stands behind him in the top right of the panel, carrying a cup with a lid in his left hand and pointing upwards with his right. His head is turned to the left of the panel towards the bearded figure of the third king, Melchior, who also wears a large crown and a belted gown. He carries a similar cup in his left hand and points to the star painted on a turret on the canopy with his right hand. The bearded St. Joseph, wearing a gown and a cloak sits on the ground asleep on the bottom left of the panel, his head bent to the right; he holds a cross-staff between his knees with his right hand, his left resting on top. The heads of the ox and the ass are represented feeding from a manger next to him. The ground at the bottom of the panel has been incised with zig-zag lines.

There is a crack in the panel across the bottom of the kneeling king's gown, across the Virgin's neck and along the top centre of the panel. The top right corner of the panel is missing. The panel bears some rich colouring, some of which appears to be post-medieval. For example the eyes of Joseph, carved as though asleep, have been painted as open. Green paint, which appears to have been 'scrubbed,' and some of the usual daisy pattern remain on the ground at the bottom of the panel. King Balthasar has a black face. The other kings and the Virgin have flesh-coloured faces with red lips and brownish eyes. The hands of the figures are flesh-coloured. The Virgin's halo is green with brown dots and white circles. The child's gown appears to have been painted green, which has been largely stripped. Gilding remains on the hair of the Virgin and two of the kings, on the borders of the garments, the cushion and the canopy. The ass is painted black, the ox and manger are brown. Greenish-brown paint on the sky appears to be modern.

There are four holes drilled in the back of the panel, two of them lead-filled and one holding the remains of latten wire. The bottom has been cut away.

Acquired by Dr W. L. Hildburgh in Spain, from the province of Soria. On loan from him since 1922. Given by Dr Hildburgh in 1946.

Historical significance: The panel is very similar in design to a panel in an altarpiece in the church at Væroy, Norway.

There is a Coronation of the Virgin also in the V&A collection (A.35-1946) which would appear to come from the same altarpiece. This may have depicted the Joys of the Virgin (as seen on the Swansea Altarpiece which incorporates similar scenes). The Adoration of the Magi was a popular scene - there are eight other examples in the V&A's collection and over 100 survive in total. The tradition of depicting one king as black spread throughout Europe from Bohemia, from the fourteenth century onwards, in representations in various media from woodcuts and paintings to wood carvings and manuscript illumination.

Alabaster panel depicting the Adoration of the Magi. English, second half of 15th century. 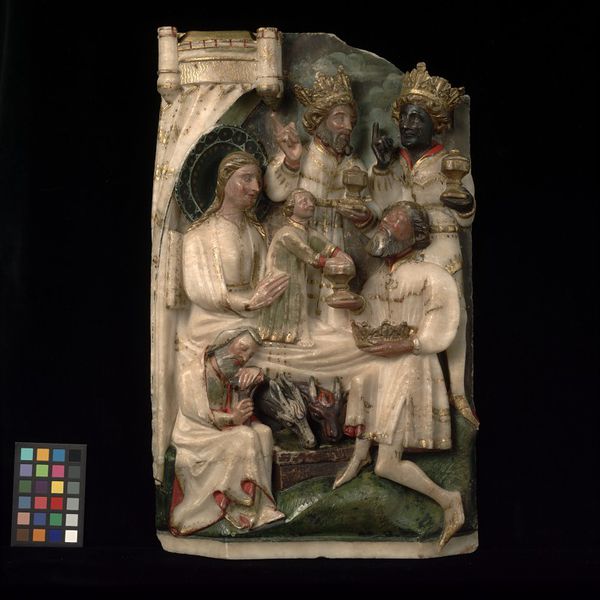