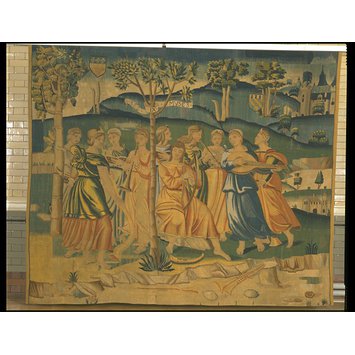 Orpheus and the Muses

Tapestry, woven in coloured wools and silks on woollen warps (14 warps to the inch), depicting Orpheus & the Nine Muses. Orpheus seated on a rock beneath a tree is playing on a harp; around him stand the Nine Muses holding flageolet, lute, horns and other musical instruments. In the background are wooded hills and a castle, and in front musical instruments on a rocky ground. Above are two shields of arms (possibly those of the Gascon families of Tersac de Montberault, and Fontaines): (1) Bendy of 6 azure and or, on a chief argent, 3 ermine spots (2) Per fesse Argent (or or ) and gules, on a chief azure 3 fleurs-de-lys. Beneath the central figure is the word 'ORPHEVS', and entwined in the tree-branches above is a ribbon bearing the legend 'LES IX MUSES'. There is a drab linen lining.

Tapestry woven in coloured wools and silks on woollen warps

Notes on the heraldry of the tapestry, suppled by Mr. A. Van de Put:
The arms, despite certain inaccuracies, are seen to exemplify the Gascon houses: (a) Tersac de Montberault and (b) Fontaines, respectively:
(a) In the dexter top corner: Tierced in fesse azure, or and gules, in chief three fleurs de lys or; for Tersac de Montberault (Note 1).
(b) In the sinister corner: Bendy of six or and azure, on a chief argent three ermine-tails sable; for Fontaines. (Note 2)

The house of Tersac de Montberault derived to name from seignories in the marches of Western Languedoc and Cominges (Haute Garonne Dept.), and appears as lord of Montberault, near Cazères, in the county of Nébouzan, in 1215.

Gaspard de Tersac (d. 1509) left, by his wife, Marie Beatrix de Benque, a son Jean, lord of Montberault, who is recorded to have obtained from Pope Julius III, in the year 1550, a bull dispensing him, his family and also Jean Jacques de Fontaines, of the diocese of Rieux, from the Jubiliary pilgrimage to Rome. François de Tersac, his son (b. about 1550) by Jeanne de Lubias (or Loubias) of the house of Misclas, was a principle partisan of the League in the south, and captain de Rieux. After the accession of Henry IV, he was assigned a pension and the court appointment of "gentilhomme ordinaire"; he married Catherine de Lambès de Savinhiac, and was buried in the church of the Dominican order at Rieux, where an imposing monument was erected to his memory.

A work by P. Palliot printed in 1660, assigns to Tersac de Montberault, the arms quarterly of Tersac and Fontaines. In the absence of any but the scantiest data relating to the heads of the house of Tersac, believed now to be extinct, other particulars of the alliance or connection between it and Fontaines denoted by the insignia in the tapestry have not been forthcoming. (Note 3).

Note 1: The coat of Tersac with its three horizontal compartments, is variously blazoned: a chief with lilies, supported by a device (Rietstap); a fesse and a chief (contiguous) charged with lilies (Carsalade du Pont); and a fess with lilies in chief (Palliot).
Note 2: That of Fontaines is usually blazoned: Or three bends azure and a chief ermine.
Note 3: "François de Tersac", by the Abbé J. Carsalade du Pont, in the "Revue de Gaascogne", XII, 141; Auch, 1871; appears to be the only printed account of a family, the known intermarriages of which testify to its eminence in Gascony in the XVI century. The recent monograph by E. Espagnat, "Notes historiques et archéologiques sur Cazères (Hte. Gne.); Toulouse, 1911; Gires, besides a view of the chãteau de Tersac, in its present condition, illustrations of the chãteau and church of Cazères, establishing a general resemblance between the architecture of the region and that figured in the tapestry.

'Orpheus and the Muses' tapestry, tapestry-woven in coloured wools and silks on woollen warps, France, 1530-1560. 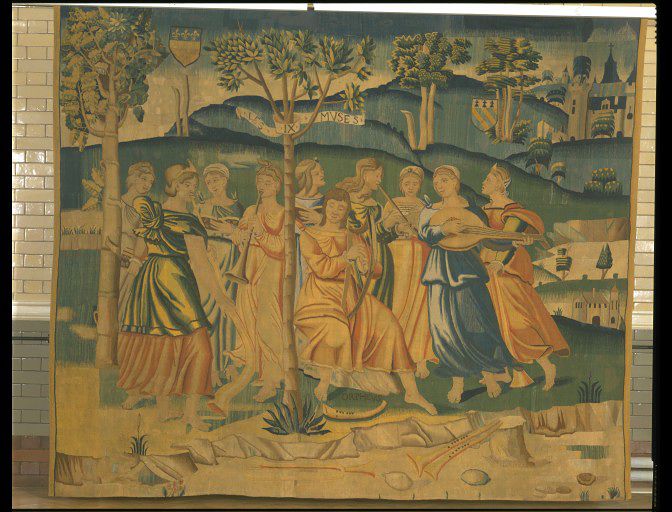