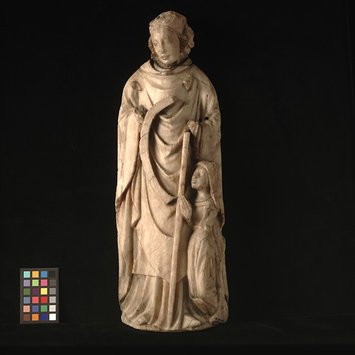 The figure of a bishop, wearing a mitre, alb and chasuble is shown standing and looking down to his right. In his left hand he holds a crozier while his right hand is raised in blessing. A small female figure, doubtless representing the donor of the carving, kneels at the bottom right, wearing a gown and veil and looking to the left.

There are a few traces of colour.

The figure of a bishop, wearing a mitre, alb and chasuble, stands looking down to his right. There is a tassel hanging from his left wrist. A crozier or cross-staff is held in his left hand. His right hand was presumably raised in blessing. A small female figure, doubtless representing the donor of the carving, kneels at bottom right, wearing gown and veil, looking left. From her hands, which are held together, a scroll rises in a curve. There are no specific characteristics by which the bishop may be identified, but the presence of the donor figure indicates that he was a saint.

Many of the details of the main figure have been broken off, including the mitre, the top of the crozier or cross-staff and the right and left hands. There are two small holes right through the figure just above the bishop's left arm. The bishop's head has been broken off and replaced. Parts of the surfaces of the carving are weathered.

Slight traces of red remain in the folds of the bishop's chasuble and gilding on his hair. The inscription on the scroll is missing. The back of the figure is marked. There are two lead-plugged holes. The bottom has been cut away.

On the back of the figure.

Historical significance: There are some dozen recorded examples of alabaster figures of standing bishops, most of them unidentified: they include complete examples in the British Museum, the Museo Civico, Turin, the Castle Museum, Nottingham, the Ripon Central Library, and the church of Toft, Cambridgeshire. A standing figure of an archbishop with a kneeling donor was discovered in Wakefield, Yorkshire, in 1755--and presumably long since lost--which was identified as St. William of York from the inscription still readable on the scroll. There is also the Flawford standing St. Peter figure in the Castle Museum, Nottingham, which includes a kneeling donor. 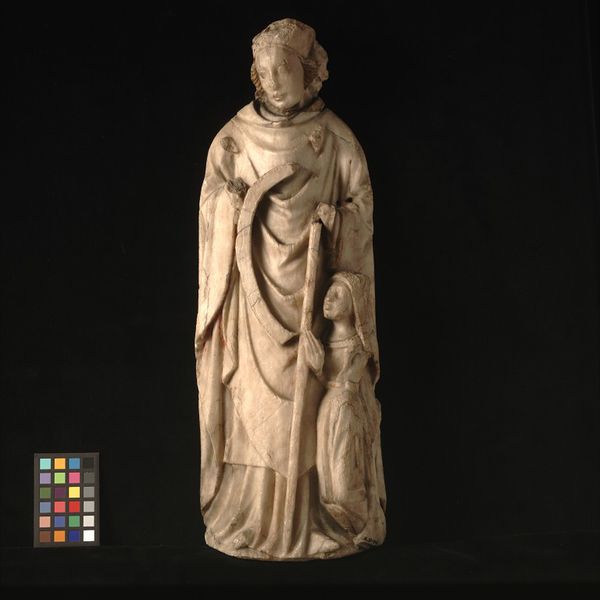