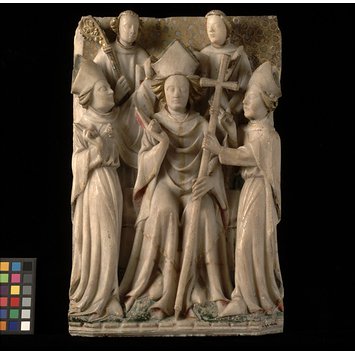 Thomas Becket's consecration as Archbishop of Canterbury in 1162 marked the parting of the ways with his old master Henry II, even though he was chosen at the King's suggestion. The Archbishop placed the interests of the Church before those of the Crown and was assinated by followers of the King in Canterbury Cathedral in 1170. Becket was canonised and his tomb became a place of pilgrimage.

The saint, wearing alb, chasuble and mitre, is seated on a throne in the centre of the panel, which is embattled along the lower edge. He raises his right hand, the first two fingers in a gesture of blessing. With his left hand he holds a cross-staff which is being presented to him by a mitred bishop, who wears a girded alb and cope and blesses with his right hand. A similar figure on the left of the panel places the mitre on the saint's head with his left hand, blessing with his right. A cleric with a tonsured head stands behind the throne on the left at the back of the panel, carrying a crozier in his left hand and a book in his right. A similar figure stands on the right of the throne, the crozier in his left hand.

Cross with incidental additions.
On the back of the panel.

Historical significance: Representations of a similar subject include one in the Leicester Museum, on loan from Mt. St. Bernard's Abbey, Coalville, and one which in 1967 was in the collection of M. Dumez-Onof, Mount Street, London. In these examples, the archbishop's cross-staff is replaced by a crozier.

A Consecration panel and a panel showing St. Thomas Becket arriving at Sandwich were sold at Christie's in 1980; both are evidently by the same hand and from the same altarpiece, confirming that the consecration scene is of St. Thomas. 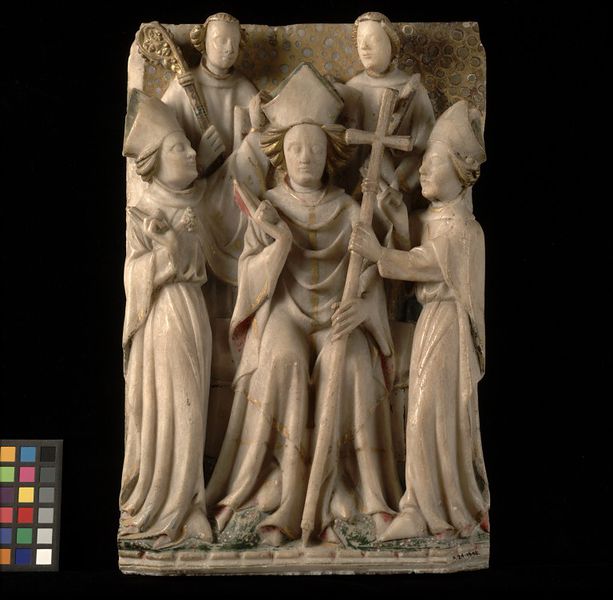