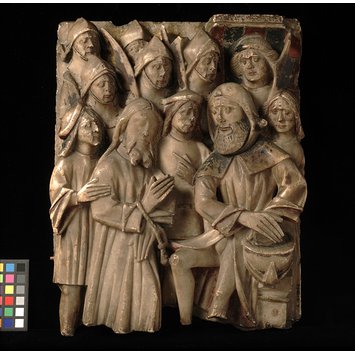 Pontius Pilate seated under a canopy washes his hands while his wife stands behind him. Jesus Christ stands before him with his hands bound.

All the gospels give an account of how after Christ was arrested and questioned he was taken to Pontius Pilate, the Roman governor. However Matthew also describes Pilate's wife warning him to have nothing to do with Christ and Pilate washing his hands. Both scenes are included in this panel.

Christ, with long hair and a forked beard, and wearing a gown, stands on the left of the panel. His wrists are bound but, in spite of this, he raises his right hand. His right arm is held by a civilian wearing a tunic and flat cap on the side of his head. Another civilian figure, wearing a low-belted doublet and a similar cap, stands between Christ and the seated figure of Pilate, at whom he looks while he points accusingly to Christ with his left hand. The figure of Pontius Pilate, with a spade-shaped beard, is seated on the right of the panel under a canopy representing the judgement seat. He wears a gown with a wide collar, and a bonnet over his head fastened by a strap beneath his beard. Looking towards Christ, he washes his hands in a bowl which is supported on a columned stand. His wife is represented behind him to the right. A civilian armed with a halberd and five soldiers wearing basinets and gorgets and also armed with halberds stand across the back of the panel. The carving of the panel is very uneven in quality, the hands in particular being very crudely carved in contrast to the faces of the figures.

The whole of the bottom of the panel is missing. Traces of black paint indicative of villainy remain on the soldiers' faces. There are traces of gilding on Christ's hair and red in the folds of Pilate's gown. The canopy is painted red, black and gilt. The upper background of the panel is gilded, with traces of gesso knobs. There are two lead-filled holes in the back of the panel.

Historical significance: There are several other recorded panels of this rare subject. One is in the Musée des Antiquités, Rouen, and another is in the Museu Nacional de Arte Antiga, Lisbon; both show the basin of water supported on a column and Pilate's wife. Another panel, in which Pilate's wife is not included, forms part of a complete altarpiece of the Passion in the Hôtel de Ville, Compiègne. A panel forming part of a Passion altarpiece in the Museo Nazionale, Naples, shows Christ before Pilate, but the washing of hands is not included and Pilate's wife is not present. There is also a panel in the Toulouse museum, and in the Louvre. The subject is also to be found on 15th-century woodcuts. 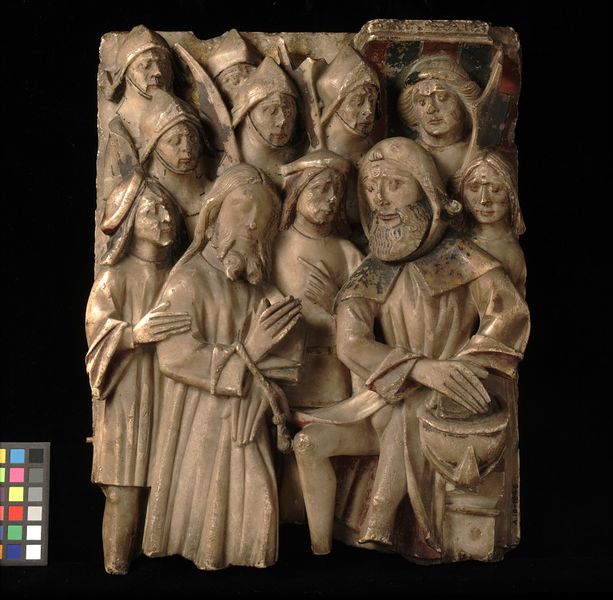