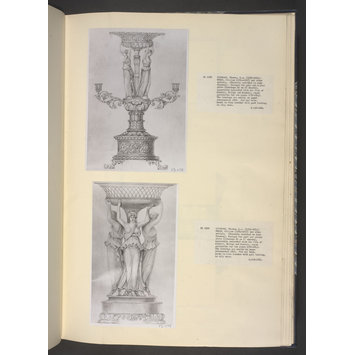 Design for a silver centre piece

A drawing of a silver centre piece by Edward Hodges Baily, circa 1820.
A drum shaped base on vine scrolling feet, acanthus stem with two candle branches and a pair of dancing female figures supporting a basket with palmettes decoration.

Similar dancing figures are on E.119-1964.
The dancing figures on E.119-1964 appear on a dessert stand made by Paul Storr in 1809-10 with glass bowls and two branches (Michael Clayton, Collector's Dictionary of the Silver and Gold of Great Britain and North America, 1971. Fig.271). The figures were also used for the central section of a dessert stand in the Royal Collection, made by Paul Storr and hallmarked for 1817.
There are indications in pencil of a third foot and a changed profile to the basket.
The stylistically disparate parts and the use of elements employed in other pieces in this design and E.121, 122, 124-1964 may suggest that the originator of these designs was Edward Hodges Baily.
The object shown probably dates from about 1820.
This design is on folio 24 recto included in an album containing 55 designs drawn directly on 27 sheets (sometimes several to a page), for gold and silver plate, including wine-coolers, tureens, inkstands, a teapot, a kettle, candelabra etc., related to the production of the Royal goldsmiths Rundell, Bridge and Rundell between c.1809 and c.1820. (E.70- 124-1964)
The album pages are of white wove paper watermarked 1806, full-bound in blue leather, gold tooled, lettered on the spine ‘Designs for Plate etc. by John Flaxman’. With the bookplate of John Roland Abbey (1894 –1969). Bound by William Wood. The back fly- leaf is inscribed “JA, 1070/ 13:9:1935”.
All the drawings are by one hand, most probably that of the sculptor Edward Hodges Baily. He became a pupil of John Flaxman in 1807, at a time when Flaxman was designing silver for Rundell, Bridge and Rundell. He joined Rundell Bridge and Rundell in 1815 as “a modeller and designer” and in 1826 became its chief modeller and designer. In 1833 he began working for the firm of Storr and Mortimer.
Some of the drawings are most probably copies by Baily of his own designs, while others are copied or adapted from designs by John Flaxman and Thomas Stothard, as well as other, anonymous, designers. The clean condition of the album, and the range of dates of the pieces shown, in addition to their unchronological arrangement, suggest that the album was made as a fair-copy record of pre-existing design drawings, all made about 1820, although some of the drawings seem also have been used as part of a design process. The drawings copied from John Flaxman and Thomas Stothard imitate the graphic styles of the originals.
The album was bought from Marlborough Rare Books on 24th March 1964 for 550 pounds. 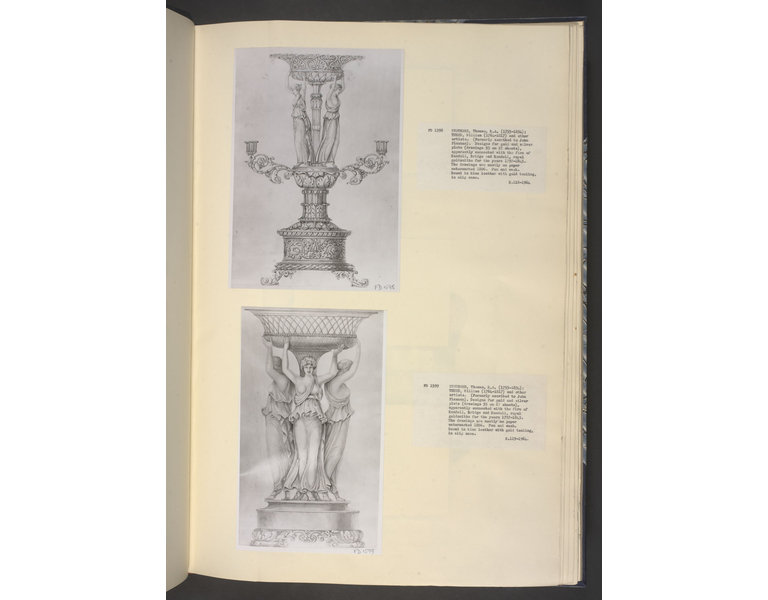